Football Fans on Tuesday in Kano urged Nigeria’s Super Eagles to beat Bafana Bafana of South Africa on Wednesday in the quarterfinals of the ongoing 2019 Africa Cup of Nations in Egypt.

‎
A cross section of those who spoke with News Agency of Nigeria (NAN) on the match said that the match “must be won’’ if Nigeria is to qualify for the semi finals or to have any chance of winning the trophy.‎

The fans who commended the Eagles on their victory against Cameroon on Saturday, called for more team work and concentration between the midfielders and attackers.‎
‎

Idris Zubair, a business man, ‎said that there was much improvement in the match compared to the group stage.

“The team must however work hard to further improve in all the departments of the game, particularly defence,” he said.‎

A fan, Isa Lamidi, said that he was optimistic that Nigeria would carry the day. ‎

“I ‎am confident that in spite of the lack luster performance of the team in the group stages, the Eagles will win convincingly,” he said. ‎

Another fan, Aliyu Momoh, urged the team to beat South Africa to brighten their ‎chances to win the trophy.

”I want the boys to approach the match with all seriousness like what they did against Cameroon and they must be committed to the game. 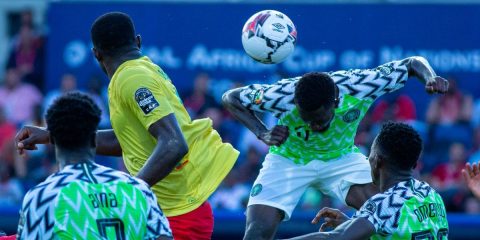 Another supporter, Emmanuel Nwodeh, said that “all the team need is more aggressiveness, hard work  and determination.‎

He also called ‎for more tactical discipline if they want to beat South Africa and win the trophy for the fourth time.

NAN reports that the Super Eagles on Saturday defeated Cameroon, 3-2, to advance to the quarter finals of the AFCON where they will meet South Africa who defeated hosts Egypt, 1-0.