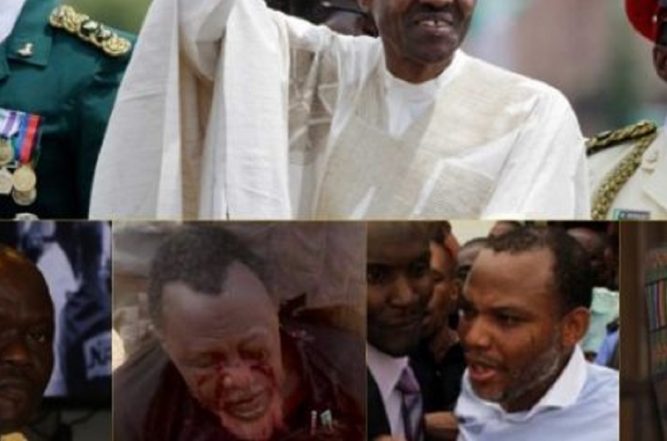 WASHINGTON, D.C.– On behalf of Biafrans who covet justice—the dead, the living, and those yet to be born—the law firm of Fein & DelValle PLLC is drafting a criminal indictment against Nigeria’s President Muhammadu Buhari and Chief of Army Staff, Lieutenant General Tukur Yusfu Buratai, for genocide and crimes against humanity under the Rome Statute of the International Criminal Court.

Loading ...
Buhari and Buratai are criminally culpable because of their command responsibility over security forces operating under their direction or control and who are terrorizing tens of millions of Biafrans specifically because of their Christianity and ethnicity.  The crimes include extrajudicial killings, torture, and sister unspeakable horrors.  They are the grisly signature of Buhari’s and Buratai’s ongoing military campaign in the South East region with the euphemistic moniker “Operation Python Dance II.
The indictment being drafted by Fein & DelValle will be presented to Chief Prosecutor of the ICC, Fatou Bensouda. It will be modeled after the genocide or crimes against humanity indictments returned against Serbia’s Slobodan Milosevic, Sudan’s Omar Bashir, Libya’s Muammar Gaddafi, Chad’s Hissen Habre, and Cambodia’s Comrade Duch.
The overwhelming majority of Biafrans cannot speak for themselves without risking lethal retaliation by President Buhari or Lt. General Buratai.  That fear explains the reason the United States District Court for the District of Columbia granted the motion of Fein & DelValle to reference their ten (10) Biafran plaintiffs anonymously in their Torture Victims Protection Act suit against sixteen (16) individual Nigerian defendants in Doe, et al. v. Buratai, et al., Civil Action No. 1:17-cv-0133.
Fein & Delvalle are gathering photographic, video, and testimonial evidence of the ongoing genocide and crimes against humanity perpetrated by Buhari and Buratai against Igbos not only in the South East region, but also in northern Nigeria and elsewhere.  There is no safe haven in Nigeria for them.  Last June, Hausa Fulani youths in northern Nigeria (AREWA) with impunity threated to evict eleven million Igbos from their homes and businesses in northern Nigeria by force and violence if they did not quit the area by October 1, 2017.
Mr. Fein stated:  “We are confident that 50 million Igbos in Nigeria were not born with saddles on their backs ready to be ridden by booted and spurred Hausa-Fulani with the grace of God.  Criminal prosecutions of Buhari and Buratai before the International Criminal Court are the best way of teaching that gospel.”
Mr. Fein and Mr. DelValle voiced optimism that the prosecutions of Buhari and Buratai will prompt the United Nations Security Council to task the United Nations Electoral Unit to conduct a referendum on Biafran independence in the South East region; and, to operate a transitional government for a six-month period prior to the balloting to avoid any intimidation of the voters.  It is no accident that South Sudan achieved independence on the heels of President Bashir’s ICC indictment for genocide in Darfur.
Nigeria’s current borders were drawn by a racist British colonial master more than a century ago with no reference to the inhabitants.  The boundaries are morally, legally, and politically indefensible.  The Government of Nigeria does not reflect popular will on that score.  It rules under a 1999 Constitution that was decreed by a military dictator for the purpose, among other things, of holding Igbos in bondage to Hausa-Fulani terrorists.
Britain defaulted on its decolonization obligation to permit self-determination referenda by each of the separate and distinct peoples of Nigeria.  United Nations General Assembly Resolution 1514, Dec. 14, 1960, provides:
“All peoples have the right to self determination; by virtue of that right they freely determine their political status and freely pursue their economic, social and cultural development.”