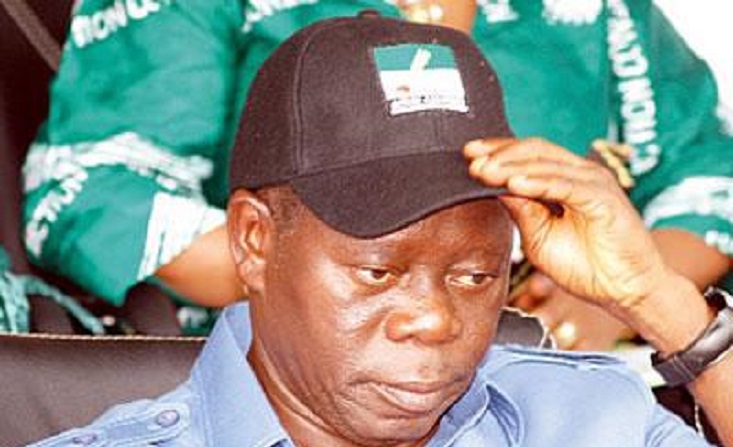 The governor of Edo state Adams Oshiomole has been in the news lately for all the wrong reasons. Not only has he become  notorious for making all kinds of spurious allegations none of which he has ever provided any proof of, he has also veered off into playing the devil’s advocate and defending the indefensible. This much is evident in his unsolicited defence of Buhari’s unprecedented sectional appointments that received knocks from all people of good will and conscience across a broad spectrum of the Nigerian society with the convoluted argument that the appointments were based on merit. Curiously his advocacy was coming at time even the president himself, through his spokesman Femi Adesina had accepted that his appointments were indeed sectional, promising to correct it  in subsequent appointments. The APC had also likewise expressed their reservations over the appointments and declared their intention to be involved in subsequent appointments to make sure the principle of federal character is respected.

Against this backdrop,  one is left to wonder what Adam’s Oshiomole was trying to achieve in his overzealous rush to issue a press release justifying what those who stood accused had already accepted as wrongs. In making the argument for exclusion and return to the old order of nepotism on the basis of merit, Adams Oshiomole like all those who make such patently flawed arguments failed to explain the criteria or basis with which the merit was arrived at. Was it education? Because if it is; then the South would be better placed to access those appointments as even the large disparity in the cut-off  marks/IQ tests  for unity schools between the South and the North (as high as 139/200 for Anambra state and as low as 2/200 for Yobe state) has pretty much established. Was it experience and exposure? Because again if it is; then the South would obviously have more candidates who both schooled and worked at home and abroad in the merit driven private sector. These two criteria’s would constitute the most standard global requisites for merit and in both the South will clearly stand out. These stark realities perhaps explain why Adams Oshiomole and his co, travellers have shied away from explaining the criteria with which their strange concept of merit was arrived at.

Some have suggested that since his tenure as governor would soon terminate, his noisemaking gambit and nuisance value is premised on creating a relevance that might make the president accommodate him subsequently in his cabinet. Oshiomole was after all a Labour union comrade who used the same noise making and pretences of being on the side of the common man to market himself for the governorship of Edo state. His later admonishing of a widow trading by the roadside “to go and die if indeed she is a widow” as claimed, caught on camera, put a lie to his pretences of being on the side of the masses. But this is Nigeria, so he rode out the storm and here he is again on another gambit for relevance this time by playing the devil’s advocate.

The last time I checked, Adam’s Oshiomole who is from Edo North has not packed his cabinet exclusively with people from Edo North (even though there is no constitutional requirement for federal character in states of the federation) on the flawed logic of merit, yet he is goading on Buhari to continue the politics of exclusion that he has not dared to do in Edo state. And this is in spite of the constitutional requirement for federal character at the centre. In other words, Adams Oshiomole is actively encouraging the president to violate the very constitution that brought him to power. I hope Oshiomole realises that without respect for the constitution or the rule of law, society degrades to anarchy and tyranny. So those of them like himself who because of selfish interests would stand logic on its head should be careful what they justify. Merit is not an exclusive preserve of any group and the continuing attempt by his likes to justify the exclusion of sections of the country on that fraudulent, illegal and immoral premise amounts to foisting an Apartheid system on Nigerians. Oshiomole by his logic might as well have defended Apartheid South Africa in it’s hey days.  All geo-political zones in Nigeria are awash with highly qualified persons and if Oshiomole can find qualified persons across his state to achieve a balancing and spread of appointments in his cabinet, I wonder why he believes Buhari cannot or should not do same at the centre where there are far more availability of persons of all persuasions.

The trending themes across the globe are inclusion and equality without which good governance cannot be achieved. In the 21st century it is abhorrent and an assault on humanity for anyone to justify exclusion, discrimination or inequality on whatever premise. Racism, Apartheid, nepotism, colonialism and all ideological premises for discrimination and exclusion have been rejected the world over. Only the Adam’s Oshiomole’s of this world and some irrational and self serving individuals still cling onto such inhumane absurdities. Given Nigeria’s fragile state, it is obvious Oshiomole’s advocacy is not intended to serve any good and anyone who listens to him does so at his own peril. As if to put a final lie to the laughable claims of merit bandied by Oshiomole and his fellow enablers of injustice, Buhari has in the course of a recent interview with the BBC confessed that his appointments were based on kinship and nothing else. So much for the lie the Adams Oshiomole’s of this world have been trying to sell.