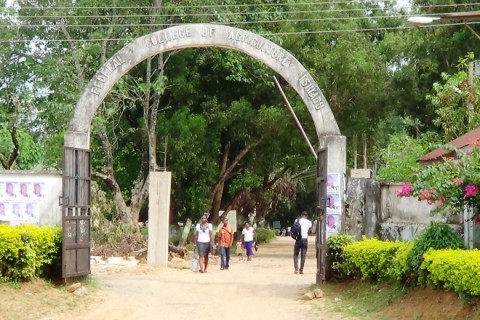 It should be recalled that Dr Felix O. Anuebunwa was dumped at Federal College of Agriculture Ishiagu in 2005 from National Root Crops Research Institute, Umudike, Jos sub-station, due to incompetence and alleged financial corrupt practices when he was heading the outstation by Dr Kenneth Nwosu, the former Executive Director, National Root Crops Research Institute Umudike.

Dr Theophilus Chinyere N. Ndubuaku was asked to proceed on sabbatical leave for two years at the National Root Crops Research Institute Umudike Umuahia in 2010 due to his corrupt activities in Cocoa Research Institute Ibadan, Oyo State using his post as National Secretary of ASURI. The former Executive Director, NRCRI Umudike, Dr Kenneth Nwosu, also redeployed him to Federal College of Agriculture Ishiagu to teach so that he could be gainfully busy.

Dr Anuebeunwa assumed office as the Acting Provost of federal College of Agriculture Ishiagu in March 2013 following the suspension of the former Provost Dr Paul O. Ajah. Dr. Anuebunwa appointed Dr Ndubuaku as his Head of Planning Unit with the trust that he knows Abuja very well and could help him cut and eat his own “National Cake”. The duo swung into action and since then the College has not known any peace due to corrupt and evil ways they are handling the College Staff and Students.

The duo paid the Chairman, Governing Board, Chief Oluwole Aina to come and intimidate the Union Leaders and staff alike instead of addressing the problems being put forward to him by staff.

Some of the activities of the Acting Provost, and the Head of Planning with the approval and connivance of the Governing Board Chairman include:

Presently the Acting Provost and The Head of Planning Unit and The Board Chairman have employed close to 100 senior staff without passing through the due process of advertisement for the existing vacancies. Rather, the three musketeers resorted to handpicking their friends and family members, a move highly rejected by the three Unions, the Executive Director of NRCRI, and even attracted the ire of Ishiagu Community Development Union (ICDU) leaders who came and accosted the management on why employment should go that way. The Board Chairman met with the leaders of ICDU on the 12th of March 2014, telling them that the Acting Provost has the right to employ that way. On the 13th of March, 2014, the Board Chairman equally met with the leaders of the three unions intimidating that if any of them tries to stop the illegal employment, that he would transfer the person(s) to any NRCRI sub-stations in the Boko Haram infested areas in the North. That he is well connected to the Government, even President Goodluck Jonathan cannot remove him, having been amongst those that made Goodluck Jonathan become the President of Nigeria in the first place.  On the 15th of March 2014, he met with the entire staff who asked him about the illegal employment moves. He said they had already perfected the illegal employment before his appointment, which opposes his earlier statements and a blatant lie.  Now the deed is already done. No one as they boasted, has stopped the whirlwind.

So many atrocities are being perpetrated by the Acting Provost (Dr Anuebunwa), Head of Planning Unit (Dr Ndubuaku), and the Board Chairman (Chief Oluwole)  include:

The Acting Provost and Dr Ndubuaku divert money illegally through the accounts of Dr Michael O. Okoronkwo and Mrs Pearl C. Ipalibo (all Planning staff) under names, which are not relevant to the College.

2. Dr Ndubuaku floated a company called HEARTLAND INTERNATIONAL which they award contracts and use to siphon College money. For example, the construction of new gate whereas classrooms are not enough for the bloated population of students awarded to HEARTLAND INTERNATIONAL. The award of contract to sell students admission forms in which N2000 per form is paid into their account as commission whereas the students purchase the forms directly from the College Accounts Unit after paying the sum of N6000 to First Bank Nig PLC Okigwe Branch. The Acting Provost authorizes the remittance of N2000 per form as commission to HeartLand International whereas the Heartland did not do any sales.

3. The sum of N500,000 was recently paid into Dr Ndubuaku’s Diamond bank account by Dr M. O. Okoroknwo for advertisement of admission form whereas over 2000 forms had been sold as at January ending when the transaction was perpetuated.

4. The Acting Provost and Dr Ndubuaku on various occasions acclaimed to people that these monies they are removing from the College are being shared between the Minister of Agriculture, Executive Secretary (ES) ARCN, and Governing Council to ensure that the Acting Provost is made substantive Provost.

5. The Acting Provost openly summoned a joint Management Meeting and Union Executives telling them that there is no vacancy for the post of advertised Provostship. Reason being that the Hon. Minister, the Executive Secretary  and Governing Council had endorsed him due to the huge amounts of money being remitted them. In his words, he and Ndubuaku had adequately greased the palms of the Honourable Minister and these persons that they have no option but to anoint him. For example, that they had recently paid the ticket fees for the Chairman of the Governing Board to the tune of N945, 000 on a British Airways ticket to the USA with his family members for holiday.

6. On January 20, 2014, the sum of Eight million Naira was diverted in the name of training workshop for 500 youths in two batches, which never occurred at the College. Rather, they paid the per diem of 17 staff (N12,000 each) for two days workshop, which was held outside the College. They also alleged that they shared the money with the Executive Secretary and the Board Chairman including the Honourable Minister of Agriculture and Rural development.

This is just a tip of the iceberg as more mind-boggling facts are following very shortly. But let all patriotic countrymen and women digest this and understand why our colleges of agriculture around the country has failed woefully. Why Nigeria cannot feed itself. And why corruption has come to stay.

For: Coalition for Transparency and Integrity (COTI)