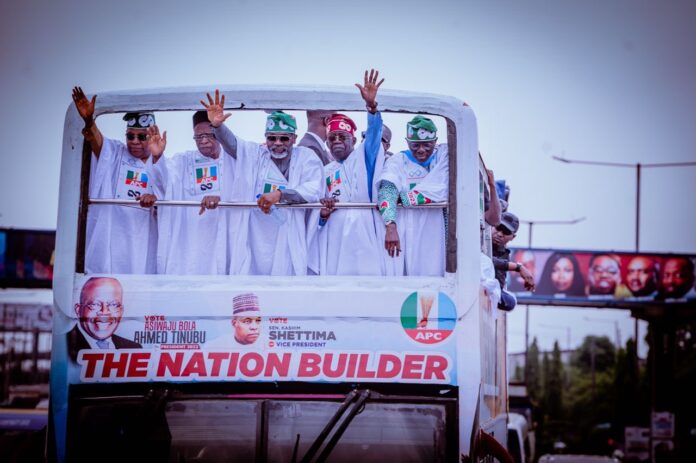 The APC Presidential Candidate, Sen. Bola Tinubu on Saturday assured ordinary Nigerians that they would not be forgotten in his administration if elected in the 2023 general elections.

Tinubu, who made this remark at the flag – off of the APC Presidential Rally at Teslim Balogun, Surulere, Lagos, said that Nigerians would not be forgotten in education, health, employment opportunities, security and infrastructure.

Tinubu said: “I am indeed grateful to the people of Lagos state. I say thank you from the bottom of my heart. It is a broom revolution.

” We will do our best for Nigeria. It is not going to be easy at the starting point.”

He expressed confidence that the party would not lose any of the progressive governors to other parties, saying,:”we will work  together to run this government”.

Tinubu urged the electorate to use their Permanent Voter Cards (PVCs) to defeat the PDP Presidential Candidate Alhaji Atiku Abubakar, describing  him  as a serial contestant over the years.

Tinubu urged Lagos residents to also re-elect Gov. Babajide Sanwo-Olu and his running mate, Dr Obafemi Hamzat for the progress and stability of the state.

The candidate, who urged his supporters to ensure peaceful conduct and collect their PVCs, said:  “God will give you your hearts’  desires.”

In his remarks, Gov. Simon Lalong of Plateau and Director General of the Tinubu/Shettima Presidential Campaign Council, expressed joy at the massive turnout and excitement by party supporters at the rally in the state.

“It is not only human beings that are happy with Asiwaju, I saw fishes jumping for Asiwaju on our way here, and we are anxiously waiting for the victory in 2023.

“Asiwaju stands tall among all the other candidates because he has demonstrated it when he was the governor of Lagos state. He has built several leaders across the length and breath of the country.

“Since he became the governor of the state, he has maintained the legacy and also building bridges across the state, and that is why wherever you go today, it is very clear that Nigerians have decided to vote for Asiwaju and Shettima in the presidential election,” Lalong said.

According to him, since charity begins at home, people of Lagos should not reject their own son because he is the only candidate that can serve the country with all his heart.

“I want to urge you all not to be deceived and do not support other candidates that will give you fictitious statistics, they are there to deceive you.

“Asiwaju Tinubu is the best candidate and the most suitable person to succeed President Muhammadu Buhari. Tinubu is a good manager of people and resources. We know he can take Nigeria to greater heights.

“Tinubu has the capacity to rule Nigeria with fairness, equity and justice. Asiwaju has done it and we can testify.

“We are anxiously looking forward to Feb. 25, 2023. Our Prayer to God is that we will be victorious. With Asiwaju and Shettima, Nigerians will not regret,” Lalong added.

Also, Gov. Atiku Bagudu of Kebbi  and Chairman of Progressives Governors’ Forum (PGF), who spoke on behalf of all other progressive governors, commended Sanwo-Olu for organising such as massive rally.

Bagudu, who thanked Lagos residents for putting their faith in the former governor of Lagos state,  said that Tinubu would run an inclusive government.

“All must vote for  Tinubu. Our party and all of us believe in  Tinubu. He has proven capable and most innovative among all candidates.

“With all the challenges he (Tinubu) faced as governor, he developed Lagos state and gave opportunity to many. We want all of you to vote Tinubu,” Bagudu said.

In his remarks, the APC National Chairman, Sen. Abdullahi Adamu said that Nigerians have huge hope in Tinubu, describing him as “the president in waiting of the Federal Republic of Nigeria”.

Also speaking, Rep.Femi Gbajabiamila, the Speaker, Federal House of Representatives, noted that Tinubu remained the most qualified to lead Nigeria.

He urged the Southeast and Southsouth residents in Lagos state  to vote Tinubu,  haven invested in them a lot in the state.

In his welcome address,  Sanwo-Olu applauded the presence of the 22 progressive governors, members of the national and state assembly, party leaders and members of the party at the rally.

Sanwo-Olu, who described Tinubu as a true leader, said: “Asiwaju is the champion of unity. I believe he will continue to work for the unity and progress of this country.

“He is the best man for this job because he has the vast knowledge. This mammoth crowd signifies victory for Asiwaju and I thank you all for the love.

“I believe with this massive turnout of the people of Lagos state , we will all go to Aso Rock come 2023,” he said.

Thousands of APC supporters and groups dressed in various campaign clothes, T-shirts and caps of different colours were busy blowing trumpets, waving brooms, hoisting flags and other symbols of the party under the scorching sun to demonstrate support for Tinubu.

The popular Fuji star, Wasiu Ayinde and other hip hop musicians entertained supporters in a live play at the event to the admiration of the participants.

Also at the event were Nollywood stars such as Yinka Quadri, Saheed Balogun, Fatia Balogun, Eniola Ajao, Modupe Daramola, Taiwo Hassan and Terry G, among others.

There was tight security at the venue of the campaign, as security agencies and ad hoc security personnel were strategically situated at the different points of entries.