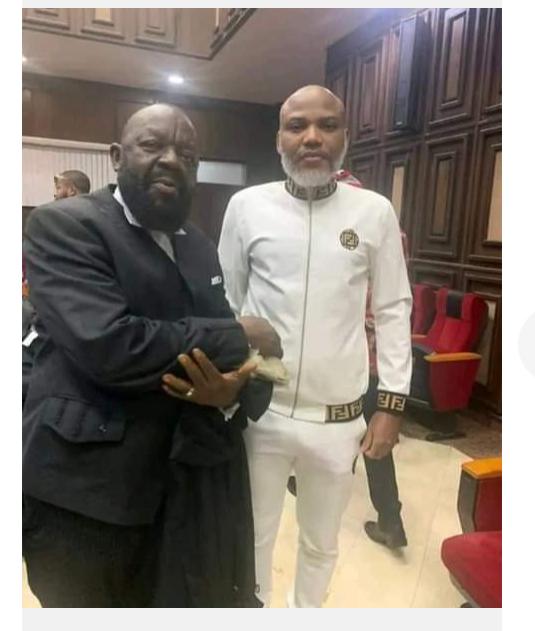 4th October 2022, the Federal High Court, Umuahia will hear Mazi Nnamdi Kanu’s extraordinary rendition suit which I had filed before the court in March this year.

The Suit is sui generis (of a special class) and it is primarily aimed at redressing the infamous unlawful expulsion or extraordinary rendition of Nnamdi Kanu, which is a clear violation of his fundamental rights under Article 12(4) of the African Charter on Human and Peoples Rights, as well as Chapter IV of the Nigerian Constitution.

In addition to the rendition, I am asking the Court to redress the myriad violations that came with the rendition, such as the torture, the unlawful detention and the denial of the right to fair hearing which is required by law before anybody can be expelled from one country to the other. I am also seeking to halt his prosecution and restore him to the status quo before he was rendition on 19th June, 2021.

You will recall that that on 19th January, 2022, the High Court of Abia State decided that portion of violation of Kanu’s fundamental rights that occurred in 2017. Even as I had made claims that bordered on rendition, the Court declined jurisdiction on grounds that rendition, being related to extradition, lies within the exclusive jurisdiction of the Federal High Court. This is what informed my decision to initiate the suit before the Federal High Court.

To be sure, the extraordinary rendition of Nnamdi Kanu triggered myriad legal questions that cut across multiple jurisdictions in Nigeria and even triggered the international legal order, to boot. In other words, the rendition has expanded the matter of Kanu far beyond the realms of the Abuja trial and opened up new legal frontiers that must be ventilated to the hilt before other courts and tribunals within and without Nigeria.

Thus, this very case before the Federal High Court, Umuahia is one of such that is aimed at seeking a definitive judicial pronouncement on the constitutionality of the extraordinary rendition. The ones in the United Kingdom, Kenya, African Union and the United Nations are in addition.

I would like to cease this opportunity to express my profound appreciation to the highly competent and hardworking team of lawyers that I am leading in the prosecution of this complex suit. Special mention must be made of Barristers Patrick Agazie, Ifeyinwa Nworgu, Tochukwu Arugbuonye, Franklin Amandi, Ohaeto Uwazie and Mandela Umegborogu.

For ease of reference and avoidance of any doubt, the following are the specific reliefs that I requested in the Suit:

2, A DECLARATION that the detention of the Applicant in a non-official secret facility in Kenya and the torture of the Applicant in Kenya by the Respondents’ agents is illegal, unlawful, unconstitutional and amount to infringement of the Applicant’s fundamental right against unlawful detention, torture and to fair hearing, as enshrined and guaranteed under the pertinent provisions of CFRN and the Charter).

3, A DECLARATION that, pursuant to Article 12(4) of the Charter, the expulsion (or extraordinary rendition) of the Applicant from Kenya to Nigeria by the Respondents without a decision taken in accordance with the law of Kenya is illegal, unlawful, unconstitutional and amounts to infringement of the Applicant’s fundamental right to fair hearing and not to be expelled from a State Party to the Charter except by virtue of a decision taken in accordance with the law, as enshrined and guaranteed under the pertinent provisions of CFRN and the Charter.

4, A DECLARATION that any criminal prosecution of the Applicant the purpose of which the Respondents unlawfully expelled the Applicant from Kenya to Nigeria is illegal, unlawful, unconstitutional and amounts to infringement of the Applicant’s fundamental right to fair hearing, as enshrined and guaranteed under the pertinent provisions of CFRN and the Charter.

7, AN ORDER mandating and compelling the Respondents to issue an official Letter of Apology to the Applicant for the infringement of his fundamental rights; and publication of said Letter of Apology in three (3) national dailies.

It is our humble expectation that, sooner than later, justice shall prevail for Mazi Nnamdi Kanu.