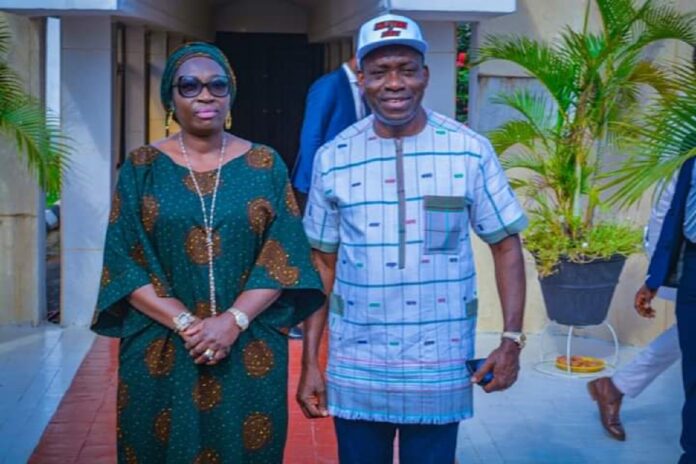 Reactions have trailed the recent visit of the Senator representing Anambra Central in the National Assembly, Iyom Uche Ekwunife to Governor Chukwuma Soludo.

Recall that Senator Ekwunife of the People’s Democratic Party (PDP), who is also a PDP senatorial aspirant in the forthcoming general election, recently led some traditional rulers, presidents-general and other stakeholders from her senatorial zone to pay a visit to Governor Soludo at the Government House in Awka.

The visit, according to her, was to formally congratulate Governor Soludo on his historic victory in the last gubernatorial election in the state; even as she also said that the Governor had always shown knowledge and competence, going by the way he is governing the state.

The PDP’s Senator Ekwunife, while speaking during the visit explained that the visit had no political undertone, as she did not embark on it as a member of a political party but as an Anambra representative at the centre.

She also commended Governor Soludo for the revised budget recently presented to the State House of Assembly, testified that she has studied the budget and was glad emphasis was placed on infrastructure; even as she also assured the Governor of the readiness of Anambra Central to partner with him in ensuring the delivery of democratic dividends to the people of Anambra State as well as the empowerment of youth across the State.

Governor Soludo, while responding thanked Senator Ekwunife and her entourage for the visit, and described her as an amazon and a true daughter of the soil who has always shown solidarity and support in so many ways to the government of Anambra State.

He therefore called on other representatives of the state to collaborate with his administration to build the liveable and prosperous homeland, irrespective of party affiliation or religious inclination; while also re-emphasizing his government’s commitment in nurturing strategic and special partnerships with the Federal government, international community, captains of Industry, NGOs in moving Anambra State forward.

The Governor also harped on the need to have quality representation at the centre, which, according to him, is necessary, in order to maximize the great potential in Anambra State.

Some top government functionaries were also present during the visit, including the Speaker of the State House of Assembly, Rt. Hon Uchenna Okafor; Secretary to the State Government, Prof. Solo Chukwulobelu; Chief of Staff to the Governor, Mr Ernest Ezeajughi; Deputy Chief of Staff/ Chief Protocol officer, Hon Chinedu Nwoye among others.

Notwithstanding the professed or perceived essence of this visit, the visit has continued to elicit diverse reactions and expressions from some politically-minded individuals, as to the overtness or covertness of the actual intent behind.

Recall also that, aside the fact Senator Ekwunife (by birth) hails from Igbo-Ukwu in Aguata Local Government Area of Anambra State, which is also the same local government area Governor Soludo hails from; she was also the Campaign Director-General of the People’s Democratic Party during the last governorship election in the state, which Soludo eventually won.

Again, recall that Governor Soludo was declared winner of the keenly-contested election since November 2021 and was sworn-in since months ago, without Senator Ekwunife visiting to congratulate him; hence, many wonder why it took her almost half a year to visit and congratulate him, as well question the real intent and essence of the congratulatory visit at this eleventh hour of parties’ primary election.

“If her claim is true, why would she have to delay the so-called congratulatory visit till now that election is around the corner?” a concerned Anambra Central constituent questioned on condition of anonymity, while reacting to the visit.

Some other social media users also expressed their views about the visit, Senator Ekwunife’s performance in the Senate and her 2023 aspiration, as shown in some of the pictures attached.

However, when contacted, another senatorial aspirant for the Anambra Central Senatorial Zone in the forthcoming general election who is vying under the platform of the All Progressive Grand Alliance (APGA), Chief Uzuegbunam Okagbue said he did not have any problem with the visit.

Speaking further, he said: “Any way one feels he or she wants to do his or her own politics, let the person go on; if it yields good result, well, it is only time that will tell. My focus now is to go through this primary process and hopefully, emerge victorious; then, I will start planning for general election. That’s all.”

Efforts to get the views of Senator Victor Umeh, who is a former senator representing the Zone and one of the senatorial aspirants for the next year election, proved abortive, as he was not responding to calls made to his phone, as at the time of this publication.