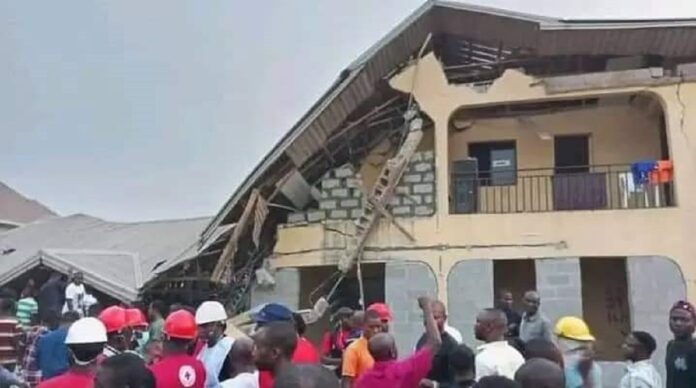 Gov. Ifeanyi Okowa of Delta has set up a Panel of Inquiry to ascertain the cause of the collapse of the Salvation Ministries building in Okpanam, near Asaba.

This is contained in a statement signed by the Secretary to the State Government (SSG), Chief Patrick Ukah, and made available to the News Agency of Nigeria (NAN) in Asaba on Wednesday.

The governor expressed shock and sadness over the incident, which occurred on Tuesday.
According to the statement, the State Government also suspended the processing and approval of building plans for Core Area ll, until the conclusion of the panel’s assignment.

The panel has Dr Helen Anazia, as Chairperson, with Messrs S. A. Aghagba and Rex Orhe, the Director and Deputy Director, Ministry of Works, respectively, as members.

Its terms of reference included to inquire and report on events surrounding the incident, the number and identity of the casualties.
The panel is also expected to, among other things, ascertain the immediate and remote causes of the incident, the scope and adequacy of extant legislation, regulations, policies, and processes concerning the safety of buildings for public use.
Furthermore, it should determine whether the legislation, regulations, policies and processes were complied with in the case of the affected building.

The panel is to identify any person or institution allegedly culpable in that regard.
It is also to establish the scope and adequacy of current legislation, regulations, policies and processes, concerning the emergency management response to the incident.

It is expected to make recommendations for “measures necessary or desirable to prevent or minimise the collapse of buildings” in the state.

NAN reports that Deputy Gov. Kingsley Otuaro had earlier visited the scene of the incident to ascertain the extent of the damage.
Otuaro had also visited the survivors at the Asaba Specialist Hospital, where they were receiving medical attention.
He confirmed to newsmen that four persons lost their lives in the incident.

He said he was grateful to God that the casualty figure was low, considering the magnitude of the incident.
“In my inspection visit, we found out that it could have been worse. What I saw was almost a total collapse.
“We had many children upstairs, when the building came down completely,” he said.
Otuaro lauded the coordinated responses of the various Ministries, Departments and Agencies of Government in the rescue operation.

“The quick and coordinated responses led to the rescue of many people alive from the rubble with minimal casualty.
“From what I saw, the patients are responding well and we hope that in no distant time, so many of them will be discharged.
“As for the bills, we are a responsible government. So, we are going to be an integral part of all that has happened.
“We are going to do all in our powers to ensure that all is well with the affected families,” the deputy governor said.

Nigeria Has Lost $178b Oil Revenue in Ogoni – MOSOP President

Mitee Belong to the Generation That Failed Ogoni – MOSOP Leader