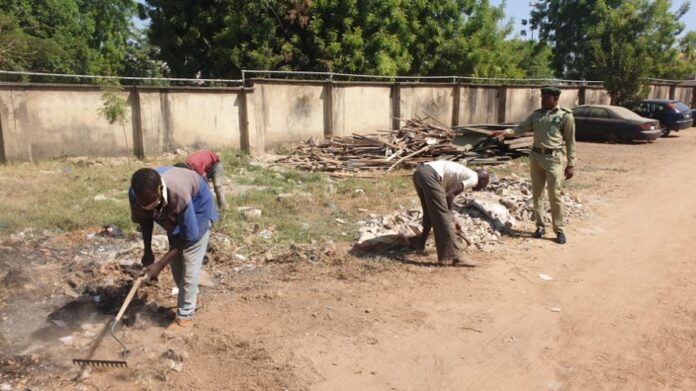 The Federal High Court, Bauchi has sentenced three offenders to community Service as part of efforts to enhance the implementation of Non-Custodial measures in Bauchi State,

The offenders, Dahiru Ibrahim, Gambo Abdullahi and Umar Rabiu were found with cannabis sativa weighing 150g, 200g and 300g respectively. They were sentenced to daily cleaning and sweeping of the premises of Bauchi Custodial Center for the period of three weeks.

When he inspected the offenders at their place of duty, the officer in charge of the Non-Custodial Service Bauchi State Command, DCC Bala D. Kitsam, commended the Federal High Court for the Sentence.

He called on the Bauchi State government to expedite action towards domesticating the provisions of the Administration of criminal Justice Act 2015 in the State for effective take off of Non Custodial measures in the State.

He said that when fully implemented, the Non-Custodial measures which include Community Service, parole, probation and restorative justice, will not only help in decongesting the Custodial Centers in the State, but the society will also benefit immensely from the services rendered by the offenders.

On their part, the offenders expressed satisfaction for sentencing them to non Custodial service which they said is better than being sentenced to Custodial centre. They pledged to abide by the rules and shun crime after their discharge.

This is one of the few sentences the Non-Custodial Service is executing in Bauchi State since its inception in 2019 following the passage into law of the Nigerian Correctional Service Act (2019).