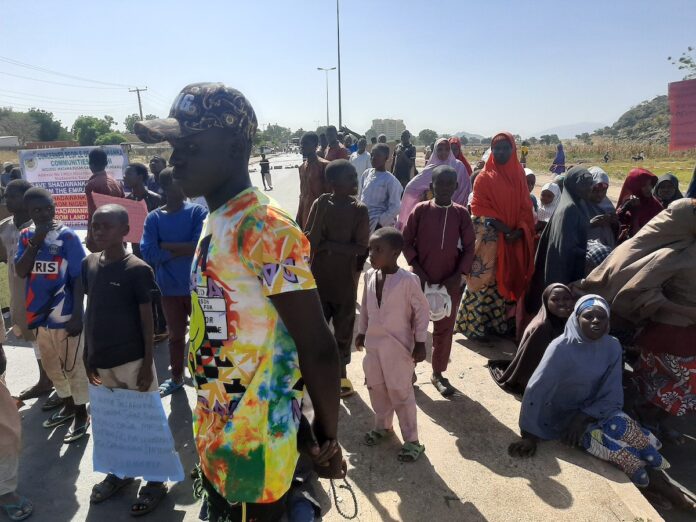 Shadawanka communities that surrounded the Army Barracks in Bauchi Local Government Area of Bauchi State has ptotested over forcefully eject and confiscate their Houses ,Farmlands allegedly by Bauchi Emirate council and the Nigerian Army.

With the Intervention of the Security adviser to the Bauchi State Governor Brigadier General Marcus Yake that convinced the protesters to open the road with a pledge that Government and all stakeholders will meet to resolve the matter peacefully within 24 hours.

The protesters that spoke to reporters Habibu Abubakar 25 years old, AishatuSani 54 years old and Hadiza Ahmadu 70 years old woman said they have been in their villages for over 150 years, they inherited their lands from their forefathers and have been utilizing same for residential,grazing ,farming,as their only means of livelihood.
They alleged that since during Gowon administration in 1972 to 74 when shadawanka barracks was built they are living their and the barracks is separated from the communities but between 1982 to 1985 apart of shadawanka was demarcated to be uses as Shadawanka barracks and obienu barracks, and the communities did not in anyway form part of the two barracks.

The communities alleged that in 2019 a memorandum of understanding was prepared by the Bauchi Emirate Council and some members of the community were forces to sign the document without their knowledge since they are illiterates,without mincing words the document was not made in good faith.
Day before yesterday the representative of the Emirate and the representative of the Army asked the communities to vacate the lands because Army want to fence their land for security reasons.

But as citizens of Nigeria the constitution guarantee theor rights to ownership of theur lands , some communities were paid compensation but they didn’t pay us? how can they eject us from our lands?
They said since when the matter came sometimes back even Army traced that they didn’t pay us a Kobo since during Gowon administration
They appeal to the Bauchi State Governor Senator Bala Mohammed Abdukadir to intervene and save the community .so that they will not be forcefully eject from their lawful Houses under his watch.
The communities said what they are after is nothing but they want to be treated with fair and just.
A source at the Bauchi Emirate Council said ” the issue has been lingering because he recalled when General Tukur Buratai was the chief of Army , the there was fracas between the Army and the community , they took their complain to the emirate and the Emirate intervened abd broker peace when the emirate reached to Buratai and appeal for amicable resolution of the issue, statusquo was maintained and the started and fenced the non disputed area and now in the interest of security they want to fence their land.
He appeal for caution and understanding to avoid anything that will lead to the break down of law and Order in the State.
Special Adviser to Bauchi State Governor on security Brigadier General Yake retired ,said he intervened by enlightening the community to understand that the people flying the road many of them gas nothing to do with the barracks or community ,they are innocent travelers , and they shouldn’t do anything that will lead to destruction of.lives and properties.
He pledged to brief the Governor and to summon all stakeholders in order to resolve the matter amicably.
Yake plead with the Army and the contractors handling the projec to maintain statuesque, and assured that everything will be resolve within short time.