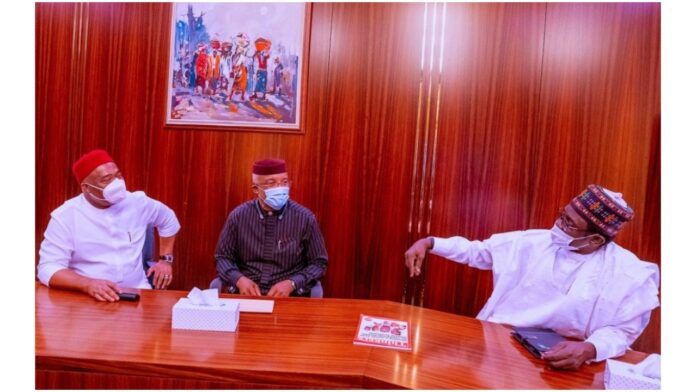 The recent shocker in the Anambra political sphere – the announcement of the Anambra Deputy Governor’s defection from the All Progressive Grand Alliance [APGA] to the All Progressive Congress [APC] – raised eyebrows around the nation of what may have caused the split from the Governor’s party, the APGA. Particularly since no known riff had been reported to exist between the governor and the deputy governor.

However new information recently made available to 247ureports.com clears the air as to the reason behind the defection to the APC, the party considered highly unpopular in the entire south east region of Nigeria.

A source close to the Nkem Okeke revealed that Nkem Okeke was offered a position as a director general [DG] of a lucrative federal parastatal as one of the major rewards for joining the APC. It was gathered that Nkem Okeke wanted to announce his defection into APC after the November 6th 2021 elections or after handover of government in March 2022 but the APC and Senator Andy Uba in cohorts with the Governor of Imo State, Hope Uzodinma insisted the announcement must be made before the November election to create the necessary impact of the illusion the populace in Anambra State have accepted APC as their favorite party above the APGA.

Dr. Nkem Okeke confirmed the promised position through a friend. He also shared the difficulties he has run into since his defection. He pointed to the top members of the APC in Anambra as his first point of conflict. Many of the old members of the APC who served under the leadership of the federal minister of Labor and productivity, Senator Chris Ngige expressed displeasure to Nkem Okeke for joining the Andy Uba/Hope Uzodinma led APC. They advised him to wait for the November 6th 2021 elections before jumping board. The understanding is the current APC has been adulterated by the unchecked injection of Andy Uba style of politics.

“All these people from other parties that Andy Uba and Hope Uzodinma have tricked into joining this party is causing more problems than it is solving. We have lost harmony. Everything is chaotic. Nobody knows what’s going on” – explained a top APC member who reflected on the defection of the deputy governor of Anambra State. He explained that Andy Uba and Hope Uzodinma ought to sit with the members of APC and map out an authentic campaign strategy to reach the grassroot. While highlighting the lack of cohesive plan, he called the gale of defections a mere ploy to deceive the President of the country into believing Anambra State has gone APC. But “the President is not a fool”. And the “people of Anambra can’t be deceived so easily”.

The APC chieftain recalled what occurred at the APC gubernatorial primaries. He said Andy Uba and Hope Uzodinma rigged the process callously in the manner it was done during the Obasanjo era – when Andy Uba served as special assistant to the then President Obasanjo. The APC chieftain also pointed to the 2006/7 gubernatorial elections which saw Andy Uba under the Peoples democratic Party [PDP] as winner. “The result of that election was written at White View Hotel [in Ifite Awka, the state capital]. It was a national embarrassment”.

The APC chieftain revealed the deputy governor confined in him of the reaction received from his people at his hometown in Enugu Ukwu in Anambra State and where he resides at Coal City in Enugu State. “He is afraid to show his face” in both places. “He was booed and pelted with pure water” by his hometown folks when he visited Enugu Ukwu shortly after his defection.

But in talking with one of his personal aides, another picture was painted as to the reasons he found it easy to defect to the APC and dump the APGA. He put it simply that “he was neglected”. Nkem Okeke was not assigned to any tasks. He would come to the office every morning and “sit around doing virtually nothing, I mean nothing.” There were no monies made available to the deputy governor’s office for the management of the office”.