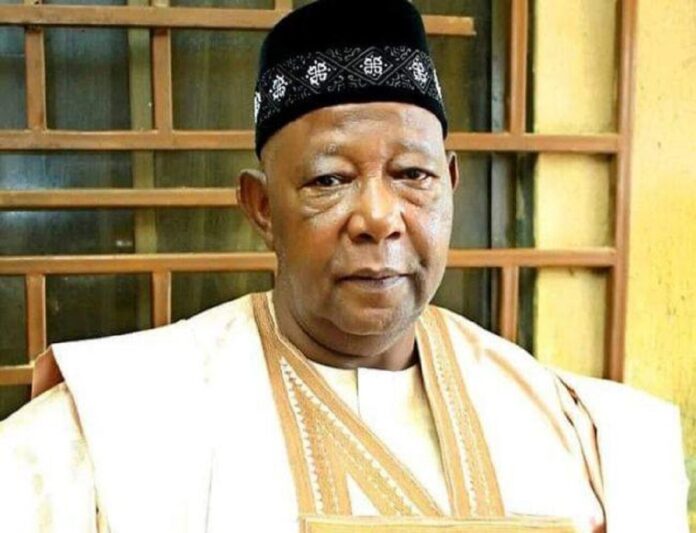 Afounding member of the Peoples Democratic Party PDP has urged the former Chairman of Independent Electoral Commission INEC Professor Attahiru Jega to account his tenure as Chairman of the Electoral body before he embarked on backbiting and false allegations against the PDP.

Bibi Dogo was reacting to the comments reported In the media credited to Professor Jega urging Nigerians not to vote for PDP again in a statement he distributed to reporters in Bauchi, He described Jegas comments as an uncontrolled, wrong and untenable political outburst in an attempt to paint PDP black in the eyes of Nigerians. Bibi Dogo said PDP meet the expectations of Nigerians as a government and oppositon party, and has delivered democratic dividends to the people of Nigeria through its 16year rule in the country. He said it’s not fair for Jega to compare PDP Era with that of the ruling All Progressives Congress, APC.

“Because trying to compare the “incompetent and decadent APC to the highly productive and development-oriented PDP is an unpardonable disservice to our nation and calls to question the sense of judgment of Professor who served under PDP and used the opportunity to bring the party down.

As at today the real stake holders of the party clings to its ideals and makes it more stronger. Elder in PDP said its surprising for Jega, who only recently described the APC and the Buhari administration as a failure, is now attempting an image laundering with such a warped comparison.

He said : “It is unfortunate that Jega, as a Professor of Political Science, could portray an ignorance of the manifest contrasts between the robust fortunes of our nation under the PDP and the wasteland she has become under the six years of APC rule”.

Bibi Dogo Said “Perhaps the Professor jega needs to be reminded of how the PDP worked hard to revamp our nation’s economy, paid off our huge foreign debts and went ahead to grow the economy to become the largest investment hub in Africa as well as one of the fastest growing economies in the world, with Fitch B+ rating; only for the APC to wreck the economy and turn our nation into the world’s poverty capital and a debtor country within space of six years of its rule.

“Professor Jega must also be reminded how the PDP reinvigorated the private sector with new businesses and employments springing up in critical sectors of telecoms, aviation, agriculture, manufacturing, oil and gas, education, retailing, hospitality, healthcare and banking among others.

“Today, under the APC and Buhari, these gains have been wrecked with massive closures of businesses, which saw over 60 million Nigerians losing their means of livelihood, with alarming 33.3 per cent unemployment rate and over 82.9 million more and about 25 million families not being able to afford their daily meals as our country ranks 98th out of 107 in Global Hunger Index, due to the obnoxious policies of the APC and President Buhari.

“Perhaps the former INEC chairman has forgotten how the PDP stabilized our fiscal economy and handed over our naira to the APC at N160 to a dollar only for the APC to wreck our currency to a dismal N510 to a dollar.

“He may have also forgotten how the PDP handed over the cost of fuel at N87 per litre and how the APC has hiked it to N165 per litre with attendant pressure on our economy.

“We invite Professor Jega to note how the PDP ran an all-inclusive and transparent administration that guaranteed freedom of speech, equity, fairness as well as free and fair elections, which he attested to; and how the APC, had been running a massively corrupt, insensitive, divisive and exclusionist administration that has destroyed our national cohesion and turned our nation into a battle field. “As professor of Political Science, Prof. Jega ought to know that while the PDP is an ideologically based political party, the APC is just a Special Purpose Vehicle, SPV, operated on the basis of deception and that is why it has failed in all ramifications and now fizzled in the eyes of the law.

“Nigerians are already confronting the fact of the failures of the APC as well as President Buhari and would therefore not require a manipulative tendency of any individual seeking political relevance ahead of 2023. “After all, the roles which Professor Jega played in bringing this failed party and administration into office are still fresh in the hearts of Nigerians.” “While Professor Jega is right about the APC which he help and brought it to power while serving under PDP because of its fairness a party under which he served as the chairman of the nation’s election management body, his comparison of the APC with the PDP.

“Professor Jega got his facts wrong and mixed up in his baseless comparison of the PDP with the APC, he should account his tenure under PDP and invite the anti graft agencies to investigate his tenure under the PDP administration if he came out clean he should fear Allah and come out to explain the most corrupt government. Since he claimed to have now joined politics as a politician can make such political statements occasionally while trying to launch his political career in a mushroom political party thinking that it will be acceptable to Nigerians. “The PDP is a strong, united, popular and focused political unit.

Hence, the Professor should note the political lesson that maligning the PDP would not provide him a springboard to achieve his desires. Nigerians are wiser and remain the ultimate judges”.In PDP we have vibrant exemplary leaders with a good vision and mission to move the country forward.He should check the credentials of PDP leaders in all states today he will see them serving their states and the country very well.

Take any state that have PDP Governors despite persecution by the anti grafts agencies they are still performing creditably.