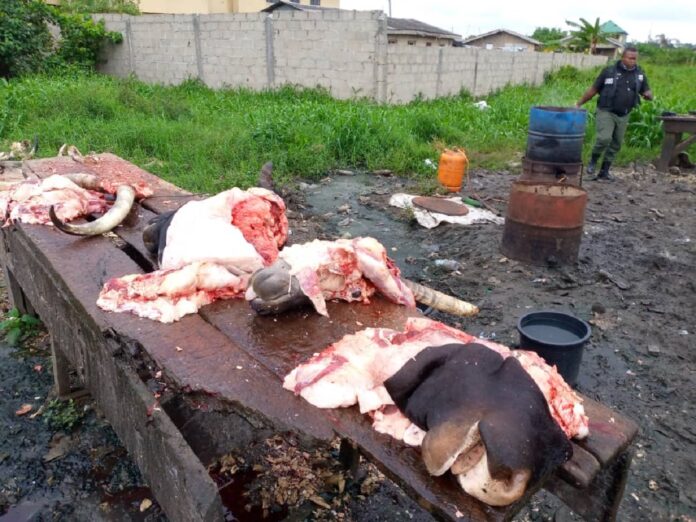 The onslaught was carried out by men of the re-inaugurated Monitoring, Enforcement and Compliance Team of the State Ministry of Agriculture in furtherance of the sanitization of the red meat value chain.

The State Acting Commissioner for Agriculture, Ms. Abisola Olusanya who made this known today explained that the exercise was coming on the wheels of repeated warnings to the operators of these illegal slaughter slabs and the menace of their activities.

“This dislodgement exercise is necessary especially as the State is particular about the production of wholesome and healthy meat for its residents while simultaneously ensuring that the streets are free of stray animals. We will also strictly enforce meat transportation using only the designated vehicles and stray animals control which has lately become more rampant in the State,” the Acting Commissioner averred.

She noted that the State Government re-inaugurated the Monitoring, Enforcement and Compliance Team last week Friday and charged it with the responsibilities of dislodging illegal abattoirs, controlling and enforcing issues relating to the transportation and sale of meat as only the Eko Refrigerated Meat Vans and Eko Live Animals Transport are the permitted means of transporting meat from one place to the another.

According to her, the team is also charged with the responsibility of confiscating stray animals on Lagos streets as they could easily spread zoonotic diseases to human being hence they pose an environmental and safety threat to the people.

“ In addition, all aspects of veterinary premises regulations, veterinary standards/compliance monitoring and enforcement would be covered by the Monitoring, Enforcement and Compliance team,” Olusanya opined.

According to her, these illegal abattoirs were constituting hazard to the businesses of legal operators who are doing everything possible to ensure that only healthy and wholesome meat is produced for the populace.

The Acting Commissioner further stated that the MEC Team would also monitor the standards of operations of all the approved slaughter houses statewide in order to ensure compliance with professional best practices.

Olusanya stated that the confiscated carcass has since been donated to the Juvenile Remand Home at Oregun, Ikeja after due inspection by members of the veterinary team in order to ensure the safety of the meat while the live cows would be deposited at the Oko-Oba abattoir at Agege for their owners to claim them within 48hours or risk being similarly donated to charity.

She added that the arrested butchers would be prosecuted at the Lagos State Task Force Mobile Court.