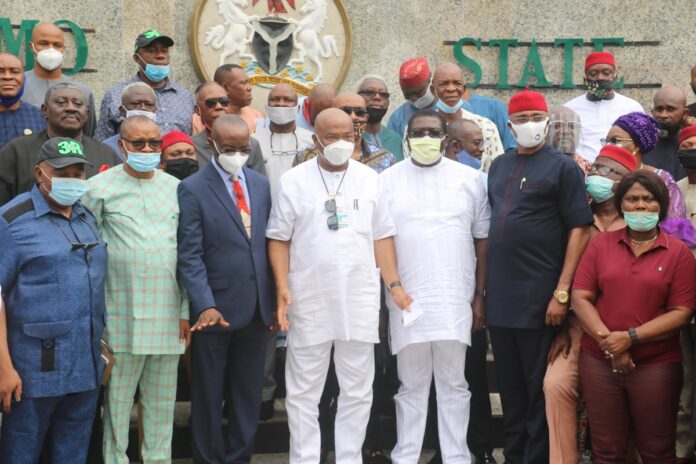 Governor Hope Uzodimma has given indication that the State Congress of the All Progressive Congress (APC) will soon take place in an environment where all party members will be carried along.

The governor spoke on Monday when he received in audience former Secretary to the Imo State Government, George Eche, former APC Chairman in Imo State, Chief Hilary Eke, former commissioners and other political appointees in the administration of former Governor Rochas Okorocha who came to pledge  their loyalty and support to his government.

The former commissioners and appointees said they are resolved to give Governor Uzodimma all the support he needs to succeed, including the effort he is making to ensure that the APC is made a strong and united party in Imo and by extension, the South East.

Governor Uzodimma said the APC State Congress will take place in an atmosphere devoid of rancour and bickering, even as he reiterated his resolve to build the Party as a strong and united one.

The governor emphasized that APC members in the State should put the past behind them and focus on politics that takes care of today, yesterday and tomorrow.

Governor Uzodimma reminded the party members that they are one and will only make progress in a united APC where the Party is seen as supreme.

He said he is open to build a party that will serve the people and invited all members to come home and help him use his God given powers to create happiness in Imo.

“With effective, united, strong and viral APC in Imo State there is the tendency for APC to spread and capture power in the South East by being in power not only in Imo but in the other four States of the Zone,” Governor Uzodimma said.

The governor regretted that the local government election is yet to be held because of the corona virus and the need for unity in the party to be achieved.

On the Okigwe Senatorial bye election he said he has no candidate of his own and that if he is opportune to vote, he will only vote for one of the 13 candidates like every other legible member of the APC in the State. He therefore enjoined all and sundry to forget about the old order and key into the new order that recognizes the tenets of democracy.

Earlier, the leader of the team and former Commissioner for Petroleum in Imo State Chief Jones Uzoka, said they came to pledge their unalloyed support to Governor Uzodimma’s administration and to support the Governor to rebuild the party and avoid factionalisation.

He acknowledged the positive performance of the Governor and thanked him for working hard to bring them out from the political oblivion of the immediate past administration.

He also thanked the Governor for his magnanimity to their group which includes the return of their vehicles seized by the PDP short-lived administration in Imo State and pleaded that the Governor helps to also return their seized landed property.

Making clarification on the visit, former Deputy Governor of Imo State, Prince Eze Madumere appealed to APC members in the state to bury the hatchet and key into the new order, insisting that the government in power in Imo State is for all of them and that the best way to reap from it is by supporting the administration of Governor Uzodimma. Madumere urged them to go out and defend the APC Government.

In a speech to welcome the guests, the Chairman of APC in Imo State, Chief Marcellus Nlemigbo told them that they are APC members and that they have renewed their membership by coming to the Government House and so entitled to all rights and privileges of members of the APC. He pleaded with them to go out and support the government of Governor Uzodimma.

Present at the meeting were the Deputy Governor of Imo State Prof. Placid Njoku, the Secretary to the State Government, Chief Cosmas Iwu, the Chief of Staff, Barr. Nnamdi Anyaehie and members of the Expanded Exco.