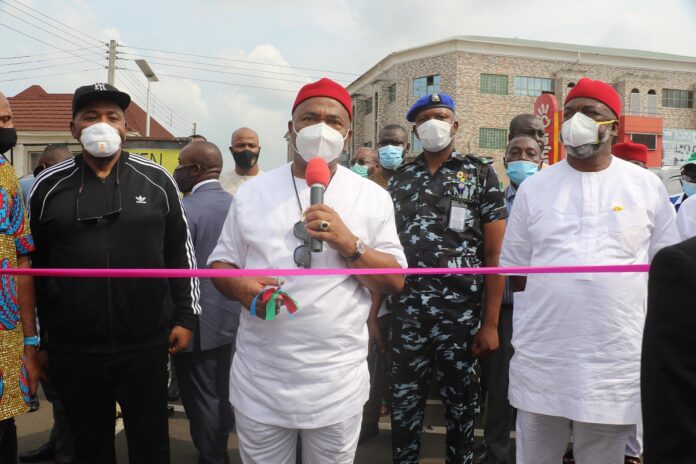 Emotions ran high on Friday when key roads within the Owerri municipality were commissioned by Governor Hope Uzodimma of Imo State who said they will help to stimulate the economy and improve the life of the people.

Performing the commissioning ceremony, Governor Uzodimma said that though some of the roads are federal roads, they are nonetheless part of the integral programmes of the State government meant to stimulate Imo economy in the Covid-19 pandemic era and beyond.

He said the roads are historical to their locations and are meant to restore the urban status of the areas where they are cited.

The governor commended the contractors for delivering quality jobs and thanked the people living in the areas the roads are located for allowing conducive working environment for the contractors which helped in delivering the work on record time.

He seized the opportunity to inspect several other on-going road projects, including canals, and promised that soon, most of the projects embarked upon by the State Government will be delivered appropriately.

Leaders of Owerri, their kits and kin such as Chief Bob Njemanze, who turned out in their numbers to witness the flagging-off of the renovated dualised popular Douglas Road in Owerri were full of praises for Governor Uzodimma and his administration for taking the bull by the horn and ensuring that the dignity of the  Owerri people is restored.

Going down memory lane, Chief Njemanze recalled how the administration of Rochas Okorocha set out to destroy everything historical to the Owerri people, and said Governor Uzodimma may not know what he had done by not only completing the Douglas Road but pledging to rebuild the Eke Ukwu market.

In an interview with reporters after the commissioning, the former Minister of Labour and Productivity, Chief Emeka Wogu (Phd) commended the efforts of the Governor in delivering good governance to Imo people through infrastructural development in a very short period of his administration when other leaders are using Covid-19 to make excuses.

Wogu said he was not surprised at what he observed going round Owerri on arrival from Abuja with the governor, and that having known Governor Uzodimma and his capabilities for a very long time, Imo people should expect more of such key quality projects that will enhance development in the first four years of the governor’s administration in Imo State.

Earlier, the Parish Priest of St. Thomas Moore Catholic Parish at Area ‘E’ New Owerri, Monsignor Anthony Njoku, commended the Governor for a job well done and thanked God for raising a “messiah” today in the person of Governor Uzodimma to attend to the roads that have been in a state of disrepair for so many years.

Present at the Commissioning were the Chief of Staff Government House Barr. Nnamdi Anyiehie, Commissioner for Works Barr. Ralph Nwosu, Commissioner for Information Chief Declan Emelumba and other members of the State Executive Council.