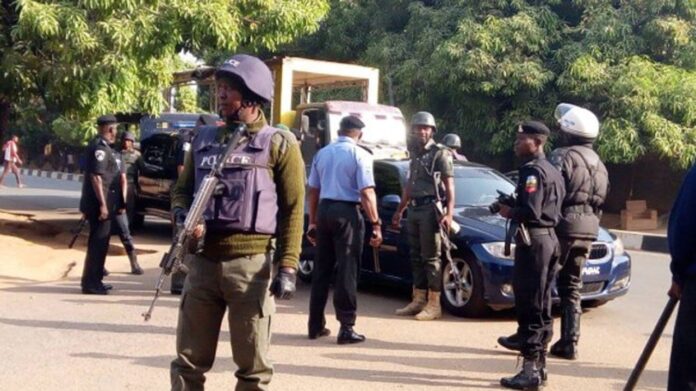 The Enugu Command of the Nigeria Police Force on Sunday confirmed the attack on their men on checkpoints and carting away of their arms by hoodlums Friday night.

It was gathered that patrol team from the Railway police under the Railway Area Command were at a checkpoint at Railway-line near the popular Ogbete Main Market when the hoodlums attacked them with machetes and took away their weapons and set their patrol van ablaze.

Our correspondent reports that the attack came five days after a police checkpoint at Owelle Court, Awgu local government area of the state was attacked and the guns of the policemen collected and injuring one.

It was gathered that the officers were on duty conducting stop and search when they were taken unaware by the hoodlums, disarming and injuring them seriously before destroying their patrol vehicle.

A police source told our reporter that the officers were currently receiving treatment in one of the hospitals in the state capital.

But the state Commissioner of Police Ahmad Abdurrahman, who confirmed the attack thanked God that none of the policemen was killed during the incident, but lamented that such attacks have been consistent.

Abdurraham said, “our patrol team from Railway police under the Railway Area Command. They were attacked on Friday night and most of them macheted with serious wounds and are responding to treatment in the hospital.

“Nobody died. We have rescued all the men but their arms have been taken away by the useless hoodlums.”

Asked whether there have been any arrest, the Commissioner said “no” adding, “you know when there is such situation you have to go underground and use intelligence.”

Abdurraham however, blamed the attack on the Indigenous People of Biafra (IPOB), saying that they are only interested now in getting arms from all security agencies, alluding that the separatist group “are stockpiling arms and it is such arms they collect from security that they will use to fight their interest. So we are using intelligence and by the Grace of God we are going to recover all the arms.”

On while he blamed the attack on IPOB when he had said that hoodlums carried the attack, Abdurrahman said there is high suspicion that IPOB was behind the attack. “They have done it before and they have been doing it; even a day after the fracas with DSS in Emene they did it.

“A day after the fracas with DSS – you know they killed two SSS men and carted away their arms, and the next day they attacked policemen on checkpoint and took away two AK- 47 rifles.

“I hope they will have change of mind and see that it is not good to be militant and maintain peace. We are doing our best,” he said.