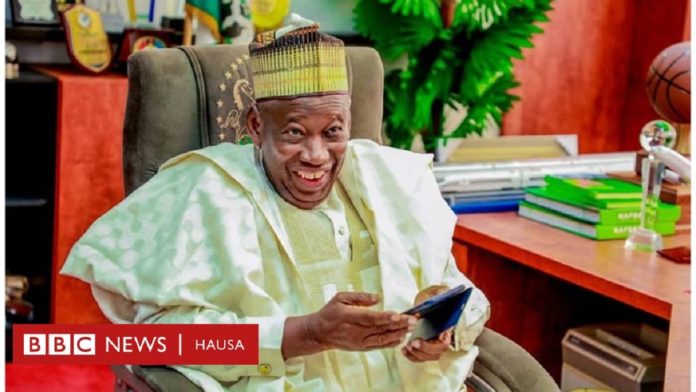 Kano state Governor, Dr. Abdullahi Umar Ganduje has declared that the report from the Ministerial Taskforce Team that about 60 per cent of people who died  during the mysterious deaths in Kano was caused as a result of COVID-19 pandemic should be thrown into the ocean.

Ganduje hinged his declarations on reports from a study undertaken by a combined team of Kano state Ministry of Health and development partners, including the World Health Organization, (WHO), National Centre for Disease Control (NCDC), AFENET and Lafiya Projects which indicated that only 15.9 per cent of the deaths were caused by COVID-19 pandemic.

Recall that  the Minister of Health, Dr. Osagie Ehinare had said that about 50 to 60 per cent of deaths recorded during the “Kano mysterious deaths,” were possibly caused by COVID-19.

However, presenting the Mortality Review (Verbal Autopsy) findings by the team, the Lead Consultant,  Muktar Gadanya, a Professor of Infectious Diseases from Bayero University Kano (BUK), countered the Minister of Health of Health comments which was based on findings by the Ministerial Taskforce Team, which earlier put said the large number of the mysterious deaths were caused by COVID-19.

According to him, the team of researchers discovered that about 1774 deaths were recorded, but the researchers traced the relatives of about 1604 of the deceased which represented over 90 per cent of the total figure.

Prof. Gadanya maintained that out of 1604 cases traced, only 255 cases of deaths were linked to COVID-19 pandemic, representing 15.9 per cent.

The team, however, alluded the remaining deaths to diseases related to hypertension, diabetes, malaria and other commonly identified ailments, including self-medication by victims who could approach the hospitals for the fear of being identified as COVID-19 patients, including disruption of medical care and down turn in economic activities.

According to him, “you are most welcome to this historic,  memorable and all important occasion

pertaining to the mysterious deaths in Kano that occurred around March/April.

“I do congratulate the team of our experts and I am happy when I read the literature review of previous occurrences all of the world in similar incidences.

“One should be convinced that this is a well researched and a well assembled  and concluded report giving a result of 15.9 per cent of the mysterious deaths that occurred in Kano are attributed to COVID-19.

“This is the report the Technical Committee appointed by Kano state government as earlier promised and we have seen this report;  and the presentation has convinced professionals, convinced laymen, even convinced suit Sayers. I do congratulate this team of experts.

“The report by the Technical Committee from the Federal Ministry of Health indicating that 60 per cent of the mysterious deaths in Kano was related to COVID-19, I think all they  indicated certainly lacked correlation.

“In fact, their data cannot pass the test of time, reliability and validity. Once such findings could not pass validity and reliability, you can as well, throw away that investigation into an ocean, signifying nothing, reporting nothing and misleading almost everybody.

“This investigation shows us that, yes, even though there was no practical examination in our laboratories, but applications, inferences from traceable sources, involving both primary and secondary data, I think there is no better way of conducting this research.

“So, I do congratulate this team and this report will be forwarded to President Muhammadu Buhari, Honourable Minister of Health, the chairman of the Presidential Taskforce on COVID-19, the National Coordinator on COVID-19. And most importantly, it is now made to the members of the public.”