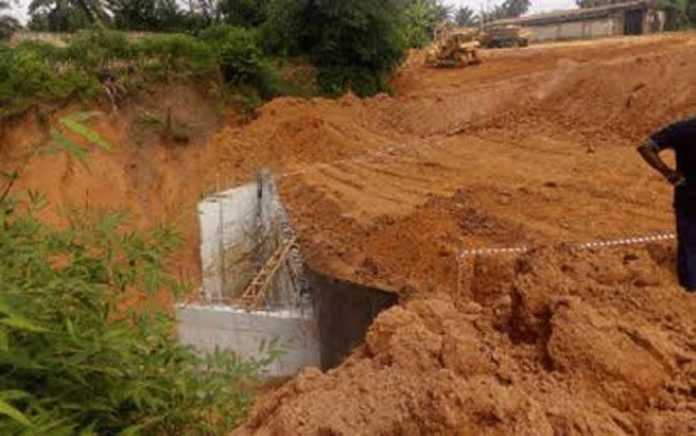 Hon. Patrick Udoba (APGA, Anambra West), has raised alarm over the menance of erosion in his constituency, Anambra West LGA, with the neighbouring constituency, Anambra East LGA. In a motion of “MATTERS OF URGENT PUBLIC IMPORTANCE”, Hon. Udoba said that the only access road connecting Anambra West and East, at Ngene-Okwuazu to INEC Road, Umueri, is badly threatened by erosion. He said that it is the only road connecting his rural community, to Anambra East LGA, enroute to the capital city, Awka, and the commercial city, Onitsha, adding that if it is not rehabilitated now, to arrest the ugly situation, he would have no accessible avenue to attend duty as House of Assembly, except to sail by canoe along River Niger to Onitsha. Or along the Omambala River to Otuocha, with excruciating hardship and costs. He pleaded that Governor Obiano should direct the Ministry of Environment and the Co-ordinator of Projects in the Nigeria Erosion and Watershed Management Projects (NEWMAP), to mobilize construction works on the road immediately.

In his contribution, the Deputy Speaker, Hon. Dr. Paschal Agbodike, (APGA, Ihiala II), lamented the rampant cases of erosion menance in Anambra State, which has small landmass, with dense population, compounded with encroachment of flood from River Niger and River Omambala, yearly, with the said Anambra West as perennial victim. He called for urgent work at the said place, to help farmers evacuate their produce, before the impending flood, which is immenent in a few months time.

In his contribution, the Minority Leader, Hon. Onyebuchi Offor, (PDP, Ekwusigo), bemoaned that the said erosion menance, is also a security threat, because, Fulani herdsmen, take their cows to the place, in search of open grazing, and molest farmers and destroy their crops, and when the innocent farmers cry for help, the road is the only accessibility by Security Operatives to reach them. He called for immediate rehabilitation to save life and facilitate transportation.

Other lawmakers, among them Hon. Dr. Nnamdi Okafor (APGA, Awka South I) Hon. Barr. Chidi Udemmadu (APGA, Ihiala I), Hon. Emeka Aforka (APGA, Orumba North), supported the motion, adding that Government should declare the State an “Emergency Case”, and appealed to Federal Government and World Bank, to come to the rescue of Anambra on erosion menance. The Speaker, Rt. Hon. Uchenna Okafor, noted that massive work is going on at various erosion sites in the State, but the case of Anambra West and East Local Government Areas, is pathetic, as they are among the major food producing areas in the State, and also prone to flood encroachment, and so deserve urgent action, to rehabilitate the said Ngene, Okwuazu, INEC Road.

In another motion of “MATTERS OF URGENT PUBLIC IMPORTANCE”, Hon. Nnamdi Dike Umeh (APGA, Aguata I), drew attention of the House, on the collapsed perimeter fencing at School of Nursing and Midwifery, Obosi, Anambra State. He said that the situation poses grave danger to the security of the students, especially, as most of them are female. He said that bandits, have easy access to the school, rob the students and threaten the safety of the female students, and for that reason, most of them have fled the school, to the comfort of their homes, thereby defeating a cardinal aim of government, to protect lives and afford education for the youths. He called on the Ministry of Health, to rehabilitate the fence with its concrete fencing, immediately.

Many lawmakers including the Speaker, Rt. Hon. Uchenna Okafor, appeal to the Government to rehabilitate the fence, immediately, as without it, students cannot learn in an atmosphere fraught with danger.