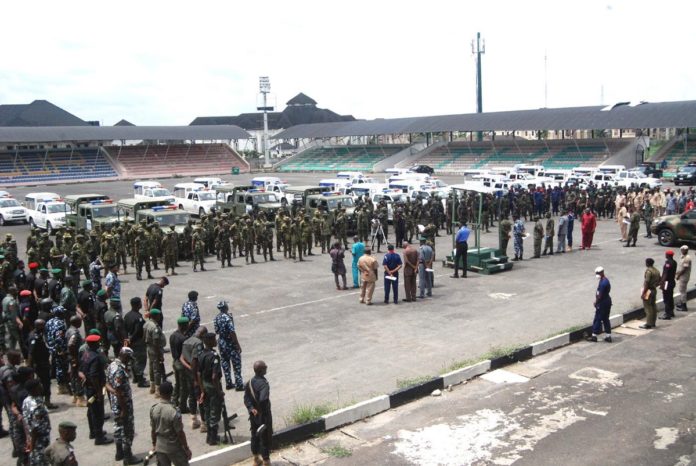 Governor Hope Uzodimma of Imo State has once again demonstrated his resolve to reduce crime and criminality to the barest minimum with the official kick-off of the Imo Armed Joint Security Patrol Task Force.

At the Heroes Square, Owerri on Thursday, Security Adviser to the Governor, Dan Okoro (rtd), charged the Task Force to be at their very best to reduce crime and criminality in the state capital and in the rural areas.

“We have to crisscross Imo State from all the nooks and crannies and fight crime and criminality to the barest minimum with a whole mind of cooperation, a whole mind of synergy, a whole mind of interaction and interface with each other,” Okoro, a retired Commissioner of Police (CP) said.

He harped on the need for unalloyed cooperation among the constituent forces, stating that the whole essence is to get the state adequately covered and secured against the activities of men of the underworld and other related social crimes.

The Security Adviser charged the operatives to eschew acts that would drag the image of the Taskforce to the mud, such as bribery, corruption, indiscipline and other vices that can hinder achievement of set goals by the Governor.

He urged the Taskforce to work with already existing security and institutional apparatuses like the Divisional Police Officers (DPOs), Transition Committee Chairmen of the Local governments, Traditional Rulers, etc to succeed in crime reduction in the state.

Responding, the Imo State Commissioner of Police, Biodun Fafowora charged the Taskforce to reciprocate the gesture of Governor Uzodimma by rising to the occasion.

He advised that the job would be easier once they pay heed to the Standard of Operations (SOP). He warned that the Service Chiefs are watching out for any form of indiscipline.

It will be recalled that Governor Uzodimma recently launched Operation Search and Flush Security outfit with an array of over 100 security pick up vehicles with the aim of taking the fight against crime to the door steps of criminals in the state.