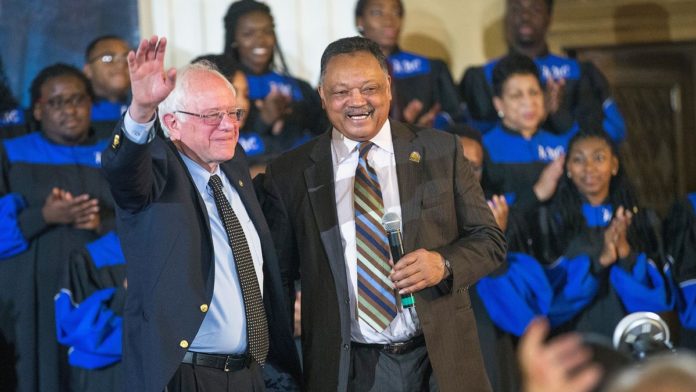 The Rev. Jesse Jackson endorsed Sen. Bernie Sanders (I-Vt.) for president during a campaign event at the University of Michigan on Sunday, telling the crowd that a vote for Sanders is a vote for justice and health care.

The civil rights activist had been introduced by Sanders at the event in Grand Rapids, Michigan, as one of the greatest fighters for civil rights in America’s modern history. If it wasn’t for Jackson’s tireless activism, Barack Obama would likely not have become the first Black president, Sanders said.

“The Rev. Jesse Jackson has broken down more barriers than one can even dream of,” Sanders said.

Jackson later tweeted, “It’s a joy to ‘feel the Bern,’” along with a photo of the two standing side-by-side.

“We look to our youth for energy, expansion and inclusion which leads to growth. The youth that come to these rallies represent hope, healing and promise for our nation,” Jackson added.

The pair’s relationship goes back years, with Sanders supporting Jackson’s second presidential run in 1988 and Sanders being an advocate of Jackson’s Rainbow Push Coalition, an organization that describes itself as working to “protect, defend, and gain civil rights by leveling the economic and educational playing fields.”

Sanders on Sunday said he’s proud to have Jackson’s back.

Sanders brushed off Harris’ endorsement when asked about it by ABC News host George Stephanopoulos in an earlier interview on Sunday.

“We have the support of virtually every major grassroots organization.” https://abcn.ws/2W1ezbr 1,8001:44 PM – Mar 8, 2020Twitter Ads info and privacy552 people are talking about this

Love HuffPost? Become a founding member of HuffPost Plus today.

This article originally appeared on HuffPost.