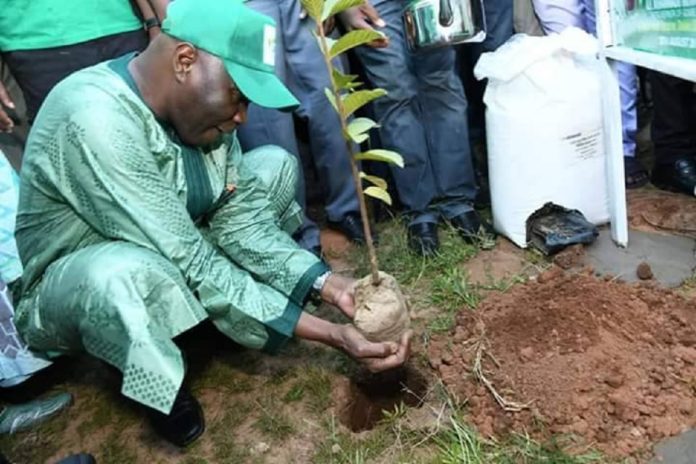 Lagos State Government says it plan to plant no fewer than 230,000 tress between now and the end of the year even as its urged residents to imbibe a clean, improved and enhanced positive approach to a climate friendly environment in order to encourage agro-forestry.

The Special Adviser State Governor on Agriculture, Ms. Abisola Olusanya who made this known over the weekend on the occasion of Y2020 International Day of Forest explained that these measures become imperative in order to discourage tree felling as well as prevent flooding in the State.

She noted that the underlying effects of climate change had over the year led to loss of properties all over the world stressing that the theme of this year’s celebration which is Forests and Biodiversity’ was aimed at promoting education for the love of forests, underscoring the importance of education at all levels in achieving sustainable forest management and biodiversity conservation.

“The importance of today’s celebration cannot be over emphasized especially against the background of the effects of climate change resulting from the destruction of our forests which in turn have killed millions, displaced millions and have led to the loss of properties and structures worth billions of dollars all over the world,” Olusanya noted.

She explained that climate change effects, which include water stress, flooding, earthquake, earth movement, flash flooding, erosion of different types and degrees were due to the uncontrolled removal of forests leading to 13 million hectares of forests been destroyed annually.

According to Olusanya, deforestation accounts for about 20% of the global greenhouse gas emissions that contribute to climate change regardless of  the importance of forests which are the most biological- diverse ecosystems on land.

The Special Adviser opined that over 1.6 billion people of the world population including more than 2,000 indigenous cultures depend on forests for livelihoods, medicines, fuel, food and shelter adding that this led to a prediction in 2011 by the Food and Agriculture Organization (FAO) that by this year, if the rate of deforestation was not seriously reversed, the country would lose her entire forest cover.

Olusanya recalled that in 2011, the world experienced a series of unprecedented effects of climate change such as ice and glaciers melting, flooding, flash flooding, erosion, forest fire, drought and water stress caused by man’s unguided and careless actions such as clearance of forests and green areas for housing, road construction and other infrastructural provisions with little or no regard for prevention of forests that houses biodiversity which are into millions of discovered and undiscovered species that support life.

“Lagos was not left out of the sad experience as on July 10th, 2011, low and high lands were flooded while some areas such as Thomas area in Ajegunle, Ikorodu were eroded. These sad events would have been prevented if there are sufficient green areas (Forests), a function it performed during the Tsunami in Japan on 11th March 2011 to emphasize the importance of Trees.

“This in Y2018 led to flooding which affected 80% of the country and triggered more than 600,000 displacements that would have been prevented if there are green areas (World Bank report, Jan. 28 2020). This has also resulted to displacements of wildlife from their natural habitats such as reported in Omole, Gbagada and other places in the State where monkeys and baboons invaded houses. Various flora and fauna are endangered or going into extinction such as Khaya ivorensis, Mitragyna stipulosa and Manatees just to mention but a few in the State just like it is all over the world,” she averred.

Olusanya disclosed that Lagos today had over 600,000 hectare of agricultural land being bastardized by surface miners leading to the fear of the host communities being submerged.

The Special Adviser stressed that presently, the efforts at reforestation cannot be said to be proportional to the rate of exploitation which put the country at risk of losing its entire forest cover which might lead to continued experience of unfavorable climatic change effects occasioned by the continued release of harmful gases that would have been sequestrated by the forests.

Olusanya acknowledged that it was on this premise that the United Nations General Assembly held on 21st December 2012 chose 21st March of every year as the International Day of Forests where member States were encouraged to hold outreach activities to create awareness on the importance of forests and particularly to raise awareness of the importance of forests to people and their vital role in poverty eradication, environmental sustainability and food security.

According to her, sustainable management of all types of forests were at the heart of unlocking challenges of conflict-affected, developing and developed countries for the benefit of current and future generations.

“Therefore in line with the THEMES agenda of the present administration to have a conducive environment for living and conducting of business and the Sustainable Development Goal (SDG) of making life better for citizens of member States of the UN, the awareness the celebration of International Day of Forest is providing should  help all residents of Lagos to join hands with the Government to have a clean, improved and enhanced positive climate friendly environment that will encourage scientific agricultural practice(Agro-forestry) that will in turn reduce hunger and improved economic situation of all,”, Olusanya averred.

She therefore urged residents to plant and protect trees, protect forests and save bio-diverse life for this generation and generations to come as well as to educate and raise the awareness of all and sundry on the importance of protecting the remaining forest cover especially in the State which its forest cover was estimated to be less than 0.2%.

Olusanya thereafter joined others including the Permanent Secretary, Ministry of Agriculture, Dr. Olayiwole Onasanya, stakeholders and environmentalists to plant trees to commemorate the celebration in the State.