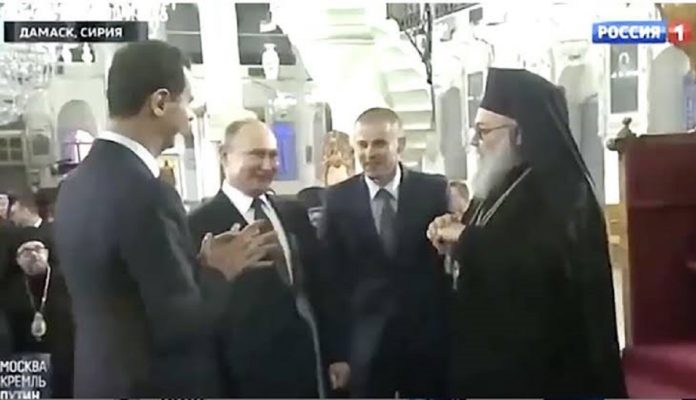 Vladimir Putin and Bashar al-Assad have been caught on video mocking Donald Trump.

At a recent summit in Damascus the leaders were filmed discussing the US president and using a biblical reference to joke about his personality.

During a visit to a Greek Orthodox church the pair discussed the biblical story of Saul’s conversion to Christianity on the road to Damascus.

God is said to have struck Saul, a Pharisee who persecuted Christians, blind, before the future apostle was cured and converted to the new faith.

In the video, posted to Twitter by a Russian journalist, Mr Assad is heard to say: “If Trump also travelled on this road, it would fix him.”

The leaders are both seen to laugh at the quip.

Mr Putin then urges his host to extend an invitation to the US president, adding: “He’ll come.”

The Russian president visited Syria for a surprise summit last week to discuss the military situation there, the Kremlin said.

Moscow is the Assad regime’s strongest backer in the Syrian civil war and the campaign against Isis.