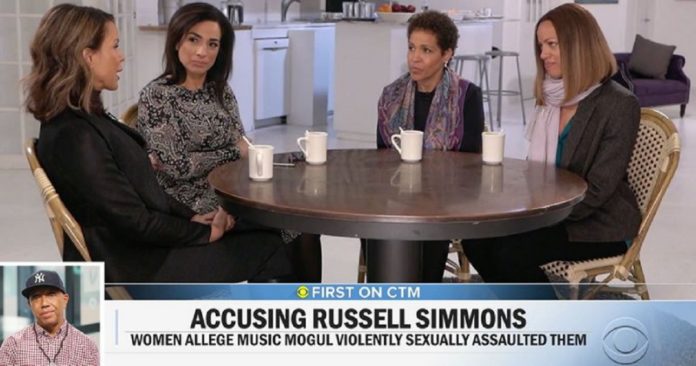 First on @CBSThisMorning: We’re hearing from women interviewed for a new documentary who claim music mogul Russell Simmons violently assaulted them.@CBSMMiller spoke to three of the women in the documentary.

Three women are speaking out about their alleged experiences over the years with music mogul Russell Simmons, whom they are claiming raped them.

In an interview with CBS This Morning, Drew Dixon, Sil Lai Abrams and Alexia Norton Jones — who were interviewed for a related as-yet-untitled documentary, set to premiere at the Sundance Film Festival this month — opened up to CBS News correspondent Michelle Miller about Simmons, describing his behavior toward them directly as “rape.”

“This is penetral rape,” said Jones, to which Dixon followed up with, “This is violently tackled and raped — while saying no and fighting and crying.”

Simmons made his feelings about the documentary known on social media in December when he shared a photo of himself and Oprah Winfrey (who pulled out as an executive producer last week) from a previous Super Soul Sunday session in which he was a guest.

Simmons, 62, denied the allegations that he had “forced” himself on women in his post, writing, “I am guilty of exploiting, supporting, and making the soundtrack for a grossly unequal society, but i have never been violent or forced myself on anyone. Still I am here to help support a necessary shift in power and consciousness. Let us get to work on uplifting humanity and put this moment and old narrative behind us.”

In Dixon’s case, she says Simmons allegedly forced himself onto her 25 years ago. As she recalled, “I literally worked for him. He was ordering me a car, and he told me to come upstairs and pick up a demo. I thought I would be in his apartment for five total minutes. That’s it.”

“And he showed up naked, wearing a condom, and tackled me to his bed, while I screamed and fought and said, ‘No,’ and cried. That’s rape,” Dixon continued.

Abrams claims Simmons raped her in 1994, explaining the two sometimes dated but “it was nothing serious.”

“He’ll say, ‘Yes, we had a sexual relationship,’ but he cannot address the fact that I was too drunk to consent, and that the next day I called him up, screaming. And I attempted suicide. He knew,” Abrams told Miller. “And I told him why: That he had ruined my life, and that I had nothing.”

Jones alleged, through tears, that Simmons raped her on their first date in 1991, “right up against the f—ing wall,” and she felt she “had to keep this secret.” (The two did not date again afterward.)

“This was a very swift attack, and what was going through my mind more than anything was, ‘Why?’ ” she said. “I liked Russell. … I would’ve just kissed him. I would’ve made out with him. He didn’t have to attack me.”

In a statement shared by CBS This Morning on Twitter, Simmons said, “I have issued countless detailed denials of the false accusations against me, including pages of sworn witness testimony including family members, clergy, journalists and mutual friends who were present at every stage. These denials have been validated by my passing nine prosecution-grade lie detector tests.”

“I have also provided sworn statements and pointed out fatal flaws and inconsistencies in written accounts, some published in their own books, to reputable media organizations which have acted responsibly,” he continued. “I have admitted to being a massively unconscious ‘playboy’ which today is appropriately titled ‘womanizer.’ “

Multiple women have accused the music producer of sexual misconduct including Dixon, who is the subject of the documentary and one of the first women to come forward with accusations toward Simmons. In 2017, Dixon told The New York Times she was working her “dream job” as an executive at Def Jam Recordings in 1995 but allegedly dealt with “prolonged and aggressive sexual harassment” by Simmons, who co-founded the label.

According to Dixon, Simmons made sexual comments toward her and asked her to sit on his lap during a staff meeting, in addition to regularly exposing his erect penis to her. Dixon alleges his behavior culminated in rape one day in his New York City apartment. “I was broken,” she told the Times, adding that Simmons allegedly pinned her to his bed and she later woke up naked in his hot tub after blacking out despite not having alcohol.

In the statement, Simmons said, “Continuing to live my life honorably as an open book for decades, devoid of any kind of violence against anyone, as has been documented and examined in detail worldwide since the very early days of hip hop, which is my life’s testimony and work.”

“What I won’t do is engage in a shootout of attacks and counter-attacks. The social change from today’s activism is more important to the world my daughters will inherit than any dirt from false accusations from nearly 40 years ago,” he said. “My life as an entrepreneur, yogi and fighter for new and diverse voices, as well as the faith placed in my work by millions around the world, has been a force for good and will continue to be as long as I’m able to serve the communities I love and cherish.”