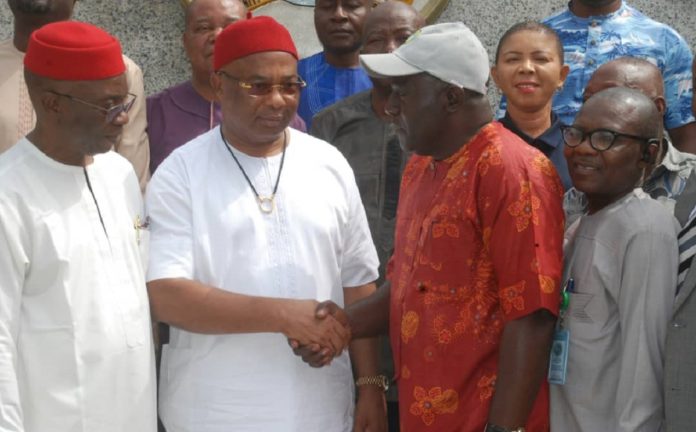 Organized labour in Imo State has met with Governor Hope Uzodimma with a pledge to support the government in its quest to reposition the civil service and return it to its glorious days.

Receiving the Labour Unions at the Government House Owerri on Monday, Governor Uzodimma solicited partnership with Labour, assuring that he has come to serve the people with utmost sincerity. He extended his hands of fellowship to the unions and promised that Labour issues will be taken seriously.

While expressing confidence that he will make payment of the new minimum wage a top priority, the Governor  directed  the committee set up for  the new minimum wage to liaise with the Secretary to the State Government and come up with their report for quick implementation.

The Governor however asked for support. “It is not about political party or where you come from, it’s all about having the capacity to deliver. “If in the next one year, the narratives have not changed, people can now talk but you must give me a chance. I know I will not fail.”

Congratulating Governor Uzodinma on his Supreme Court victory on behalf of his colleagues, the NLC Chairman, Comrade Austin Chilakpu expressed their readiness to partner with the administration to work for the progress and development of the civil service and the state at large.

The Labour leader requested for a smooth flow of information between Government and Labour and prayed that salaries and pensions be paid promptly and simultaneously as promised.