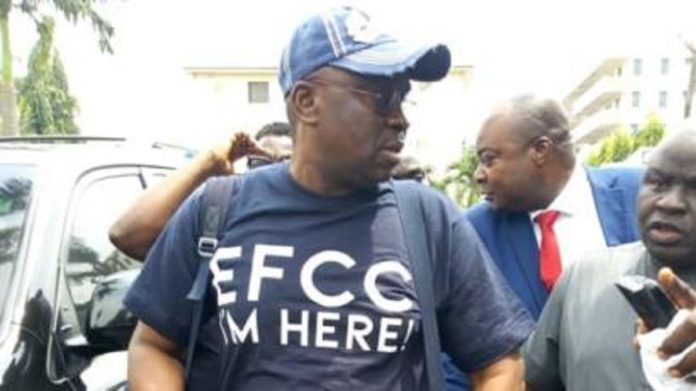 The Economic and Financial Crimes Commission, EFCC, on Thursday, January 16, 2020, asked Justice Chukwujekwu Aneke of the Federal High Court, Ikoyi, Lagos to dismiss an application filed by former governor of Ekiti State Ayodele Fayose, who is being prosecuted for alleged N2.2billion fraud.

The EFCC is prosecuting Fayose alongside his company, Spotless Investment Limited, on an 11-count charge, bordering on fraud and money laundering to the tune of N2.2billion.

The matter started before Justice Olatoregun, but was subsequently re-assigned to Justice Aneke.

At the resumed sitting today, counsel to the defendant, Olalekan Ojo, SAN, told the court that there is an interlocutory summons filed by the defendant on December 2, 2019.

Ojo further stated that the move by the prosecution to call a fifth prosecution witness, PW5, to give evidence in line with his extra-judicial statement was an abuse of court process, adding that “he was previously not listed as a witness in the matter, while it was before Justice Olatoregun.”

Ojo also urged the court to resolve the issue in favour of the defendant’s application and grant the reliefs.

“This cannot be the basis why the defendant says the prosecution cannot call a witness. Whatever happened with the former Judge is no longer relevant. The matter has started afresh and this does not stop the prosecution from calling another witness in its additional proof of evidence,” he stated.

Adeniyi, therefore, urged the court to dismiss the application and also impose a substantial cost on the defence for attempting to waste the time of the court.

Justice Aneke adjourned the matter to February 17, 2020, for ruling and continuation of trial.