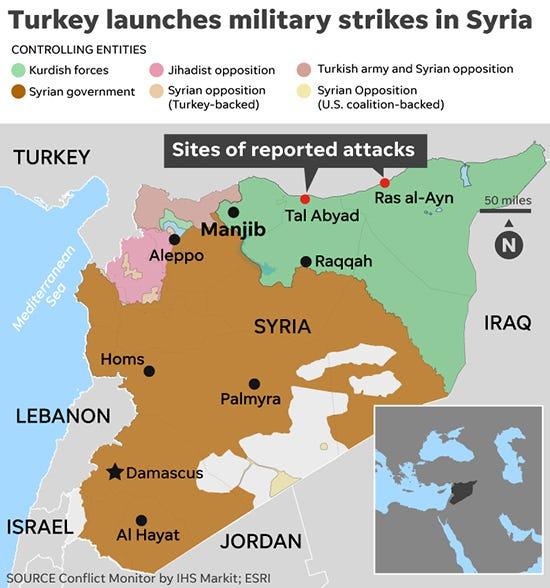 “The Turkish Armed Forces, together with the Syrian National Army, just launched #OperationPeaceSpring against PKK/YPG and Daesh terrorists in northern Syria,” Erodgan announced on Twitter. “Our mission is to prevent the creation of a terror corridor across our southern border, and to bring peace to the area.”

The move comes in defiance of international criticism and just days after President Donald Trump announced U.S. troops supporting Kurdish forces in the area would be pulled back from the border zone. Trump has defended the move.

Fahrettin Altun, the Turkish government’s chief spokesman, said Turkey seeks to “neutralize” Syrian Kurdish fighters in northeastern Syria and to “liberate the local population from the yoke of the armed thugs.” He made those comments in an op-ed in the Washington Post.

Syria’s Kurds have partnered with U.S.-led coalition forces in northeastern Syria fighting the Islamic State group for nearly four years. But Turkey considers some of them to be militants linked to outlawed Kurdish rebels within Turkey who have for years waged a campaign of terror aimed at securing their autonomy from Ankara.

Trump has threatened to punish Turkey economically if it does “anything outside of what we think is humane.” However, both Democratic and Republican lawmakers have condemned Trump’s actions, arguing that it not only poses a threat to a key U.S. ally but endangers the campaign against the Islamic State.

Syria’s Kurds have also been running detention centers in the region that are holding thousands of former Islamic State militants and their families.

In a statement late Tuesday, the General Command of the Syrian Defense Forces — the group that’s been working with U.S. troops — said the border areas of northeast Syria “are on the edge of a possible humanitarian catastrophe …  This attack will spill the blood of thousands of innocent civilians because our border areas are overcrowded.”