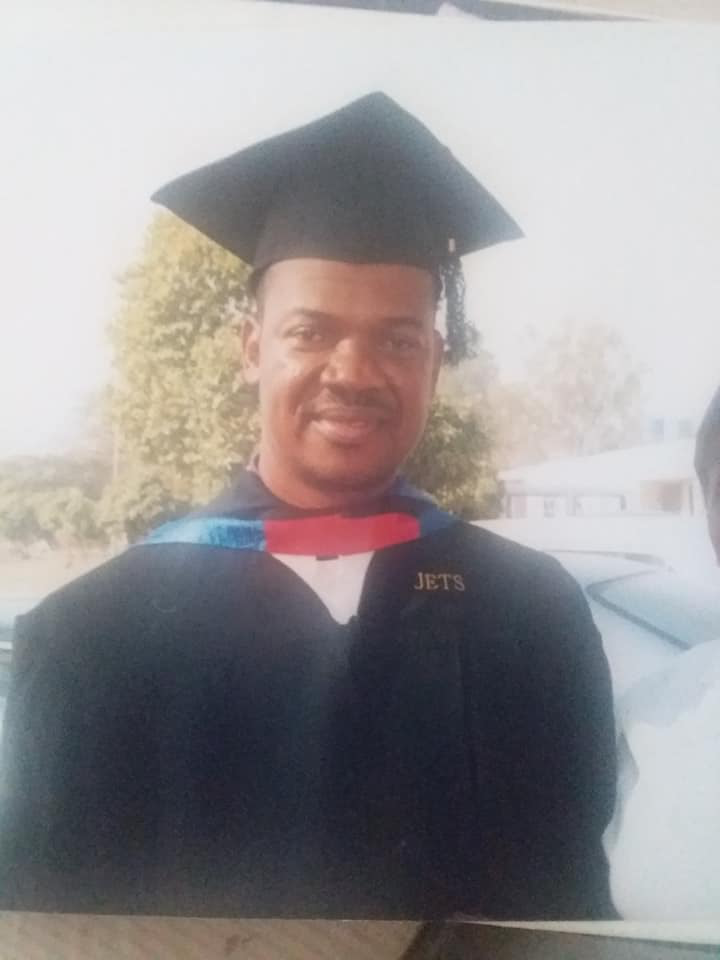 Madame Prosecutor, thank you for your felicitations to Ms Zion, a victim of Boko Haram, on her resounding academic success in the US. May we also submit that the single worst thing happening to women in the world today is the abduction and deployment of helpless victims as suicide bombers by Boko Haram in the hundreds. We cannot imagine anything more abominable and reprehensible. It is in this context that Ms Zion’s phenomenal success is at once inspiring and laudable in the dark landscape of human rights.

We regret to inform you that last week Boko Haram/ISWAP Terrorists released videos of the execution of two hostages working on humanitarian assignments in the northeast.

Our preliminary investigation has determined that their names are Lawrence Duna Dacighir and Godfrey Ali Shikagham, both Christian men from Mangu in Plateau State in central Nigeria.

They were in Maiduguri helping with housing construction to meet the needs of aid workers and victims that have saturated the city when Boko Haram apprehended them.

We wish to draw your urgent attention to the fact that taken together with the execution of aid worker Hauwa  Liman (ICRC) this time last year, the recorded number of aid workers slaughtered by terrorists in Nigeria over the past decade is now in excess of 40. This averages one per quarter for 10 consecutive years!

Weeks ago an ISWAP terror video claimed that a UNICEF midwife Alice Ngaddah and 16 year old Christian heroine Schoolgirl Leah Sharibu have also been killed although not independently confirmed.

The new hostages of Action Against Hunger issued distressful pleas for intervention with no response of note. More executions of humanitarian workers could yet occur.

As we mark Nigeria’s 59th year of Independence, Nigeria faces existential threats on many fronts including unchecked terrorism by groups tagged by the Global Terrorism Index as the 1st,2nd and 4th deadliest in the world.

We urge you to remind President Buhari of Nigeria’s obligations under international humanitarian law to ensure the protection of aid workers, internationally protected persons, and non-combatant civilians in its engagement with BH/ISWAP.

Alice Ngaddah is one of the remaining hostages from a UNICEF project in the Rann IDP camp. UNICEF had previously lost a staff member in the 2011 bombing of the UN Building in Abuja by Boko Haram.

We note especially that this is the first execution by Boko Haram/ISWA of an aid worker on the basis of ethnic cleansing.

While Madam Chief Prosecutor rightly determined that Boko Haram deserved preliminary examination as a salafist terror group perpetrating crimes against humanity on the basis of religious persecution, the summary execution of Lawrence and Godfrey on the basis of their ethnic origin in Plateau State is a new low for Boko Haram.

“We must ask ourselves if this is the kind of country we want where young men who are earning an honest living are brutally killed while those who abduct and kill others are invited to dialogue with government and paid handsomely. President Buhari must show the people of Plateau that he does not condone the ethnic cleansing against them just declared by Boko Haram.”

In your Article 5 Situation Report of August 5, 2013, you stated thus, “The Office considers that there is a reasonable basis to believe that, since July 2009, Boko Haram has committed the following acts constituting crimes against humanity: (i) murder under article 7(1)(a); and (ii) persecution under article 7(1)(h) of the Statute. In particular, the information available provides a reasonable basis to believe that, since July 2009, Boko Haram has launched a widespread and systematic attack that has resulted in the killing of more than 1,200 Christian and Muslims civilians in different locations throughout Nigeria. The scale and intensityof the attacks have increased over time. The consistent pattern of such incidents indicates that the group possesses the means to carry out a widespread and/or systematic attack, and displays the degree of internal coordination and organizational control required to that end. The attacks have been committed pursuant to the policy defined at the leadership level of Boko Haram, which aims at imposing an exclusively Islamic system of government in northern Nigeria at the expense of Christians specifically. Opponents of this goal have been targeted as well.”

Madam Prosecutor, we urge you to make an additional finding of ethnic cleansing by the actions and declared policy of Boko Haram/ISWAP against the indigenes of Plateau State.

As aptly captioned in this article, https://www.assistnews.net/decade-of-tears-and-blood/, Nigeria has witnessed a decade of terrorism which exceeds even the 30 months Biafra civil war.

Victims such as the family of martyred pastor George Ojih mentioned therein have received neither justice nor assistance from the government in 10 years. Incidentally today is the 10th birthday of their daughter who never met her dad. This young girl has not experienced a terror-free Nigeria all her life and this brings home the urgency of action on this matter.

We urge you to prevail on the government of Nigeria to provide compensatory justice to victims such as Mrs Ojih, Ms Zion and numerous others as they await legal justice.

May we also use this opportunity to inform Madame Prosecutor that the  escaped Chibok schoolgirl whom you met some years back has also earned her Associate Degree in Science this year.

We conclude by wishing you successful deliberations at the ASP as people of goodwill work collectively towards global justice for those who paid the ultimate price such Lawrence and Godfrey last week.

We regret that visa bans by the US government have prevented your ability to hold the annual Assembly of State Parties at the UN in New York thus delimiting our ability to attend this year. This is a travesty that we hope the US Government will reverse.

In the end, we will remember not the words of our enemies but the silence of our friends. – Rev. Dr MLK

BIRTHDAY POEM TO HER DAUGHTER BY PASTOR GEORGE’S WIDOW
An Ode to My Fatherless Daughter, Queen Esther

October 1 Independence celebration often relive an anguished memory in me.
While millions calmly celebrate Nigeria’s political liberty from the colonialists, many subdued, hapless and mournful individuals like me drench our pillows with tears.
In this mournful condition 10 years ago, a few weeks after my husband was beheaded by blood-sucking Boko Haramists during their first major onslaught against Christians in Maiduguri, Esther was born at ……. in Maiduguri.
Today, I look back and I have plenty reasons to appreciate God for His kindness, mercy and love for me, for my children and in particular, for those that God have been using to support us thus far.
In all things, I return praises To God as I wish you, Esther my Queen, a happy birthday celebration. Congratulations my dear. May you fulfill destiny and remain on top for the rest of your life, amen. Cheers!