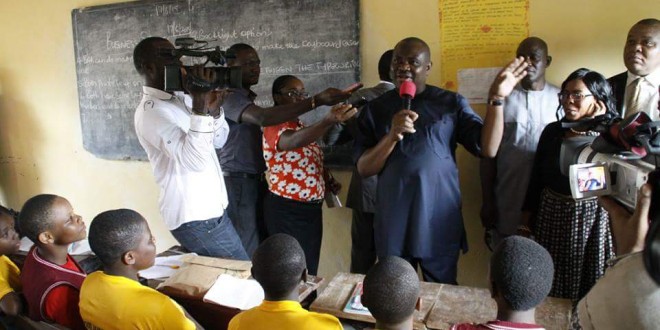 Prior to becoming the Governor of River State, Governor Wike was the Federal Minister of State for Education under the Jonathan administration.

He said “From today henceforth, no child either in primary and secondary schools should pay fees and levies in any school across the state. The monies you collect from these children are just used for your personal purposes. If I hear that any school head collects any fees or levies, be they examination, NECO or WAEC fees, that school head would be sanctioned. We shall not only dismiss the school head who collects fees or levies, we will prosecute the person involved. Government will work out grants that will be sent to the schools for their regular management and operations.’’

He directed the Ministry of Education, the Senior Secondary Schools Board and the Universal Basic Education Board to monitor all public schools across the state to ensure full compliance. The governor also noted that his administration funded the salaries, allowances, examinations and equipment of all public schools. He assured parents that his administration was commitment to the provision of quality education and accessible to the less privileged.

Dr. Kaniye S. A. Ebeku, a Professor of Law and pioneer Dean, Faculty of Law at the University of Port Harcourt, Nigeria, is the current Rivers State Education Commissioner. He became commission on December 2015.

In February 2018, Students in public Secondary Schools in Rivers State staged a protest tover the poor conditions in their schools.

The students of Rivers State Comprehensive Secondary School, Olanada in Rumuola area of Port Harcourt said they have been neglected by the state government. The school pupils also complained that the State Government under Governor Nyesom Wike has abandoned Public Education.

One of the pupils said, “We have not had teachers for a long time. Only Youth corpers have been coming to teach us. We have been learning in only two classrooms. We are almost writing WAEC but nobody has been teaching us. We have not done practical. We don’t have laboratories. The government is not doing anything”.

Nnamdi Kanu’s speech at the EU Parliament on 10th September, 2019