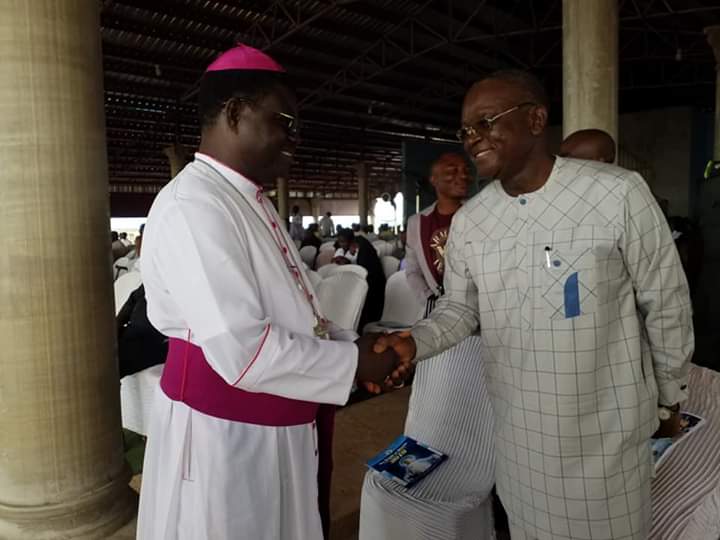 As Ortom Urged Sustained Prayers For His Administration

The Bishop of Makurdi Diocese, His Lordship, Most Reverend Bishop Wilfred Anagbe has admonished the youth against negative use of the social media and other unwholesome acts.

Bishop Anagbe stated this at the Sesugh Maria Pilgrimage Centre, Ayati, in Benue while addressing pilgrims at the 2nd anniversary celebration of the centre.

His Lordship who condemned the sovial ills among the youths cautioned parents to ensure they offer sound education and moral values to their children.

He also decried the wanton killings in the land sued for continued prayers among Christian just as he warned parents against child trafficking and to stop sending their children to stay with people they do not know.

In a homily, Director Family and Human Life Unit, Catholic Diocese of Makurdi, Very Reverend Fr. Oliver Agbile, advised Christians to propagate the works of God in whatever position they occupy, emphasizing that the Virgin Mary should be their guiding principle in their service to God.

Also addressing the pilgrims, Benue State Governor Samuel Ortom has appealed to people of the state to continue to pray for their leaders for the desired leadership direction and God’s wisdom to deliver in their services to the people.

Ortom who noted that security agencies has intensified the fight against criminality and kidnapping in the state, expressed the hope that God would grant his administration victory over such elements.

Governor Ortom lauded the vision of the Catholic Bishop of Makurdi Diocese, Most Reverend Wilfred Anagbe for initiating the Pilgrimage Centre and sued for the support of Christians to make it succeed, saying the Bishop had demonstrated true servantship to God.

Bishop Anagbe prayed and released ballons, weaved like a rosary, into the sky signifying peace in all parts of the state and Nigeria at large.