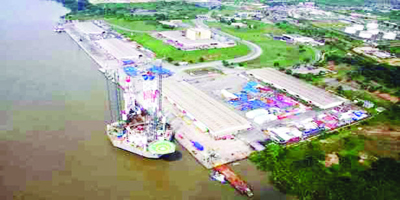 The outgoing Manager of the Calabar Port, Mrs Funmilayo Olotu, has said that business activities had improved tremendously since she assumed office in October 2016.

She stated this on Saturday at an interactive session organised by the management of the port to welcome the newly-appointed manager, Mrs Marie Asein in Calabar.

Olotu expressed appreciation to the staff and management of the Calabar Port, as well as other stakeholders for the successes achieved during her tenure.

She said: “We have achieved a lot since 2016 when I assumed office as Calabar port manager; at least we can confidently say that the volume of business activities have increased.

“I want to appreciate all of you. It has been a wonderful time in Calabar.
“I appreciate the Nigerian Navy for securing the port. Sometimes, we had pockets of issues here and there but they were always there.

“All other stakeholders in the Calabar port, I appreciate you all. I want to say that anything we have achieved in the past two years or so has been the collective efforts of all. Thank you very much and God bless you.’’

In her remarks, the new port manager assured the management and staff of the port and other stakeholders of her readiness to do much more, to enhance activities at the port.

She said: “Her achievements will be my challenge. I make bold to say that the Calabar port will continue to work under my watch. By the grace of God, I am going to fill in the gap.’’

Asein, however, solicited the cooperation of all stakeholders in the task of improving business activities at the port.
“A tree cannot make a forest; I want you all to extend the same cooperation to me. I want to tell you that under my watch, business will continue to move at the Calabar port,’’ she said.

The various stakeholders at the port, including the Dozzy Group, Eco Marine Terminal and Port Security, in their goodwill messages, commended the outgoing port manager for her commitment and hard work during her tenure.

Mrs Olotu has been posted to the Apapa Port as Manager, while Asein was the Traffic Manager, Delta Ports, until her new appointment.