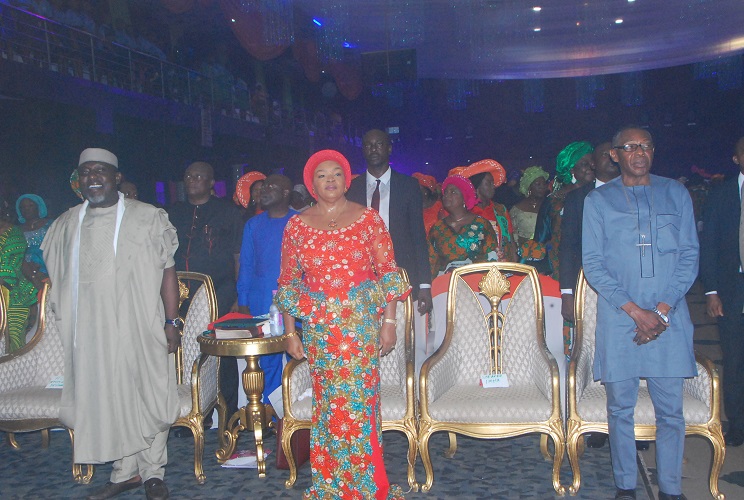 – Expresses Happiness That Imo Is Today Dotted With Verifiable Projects Done By His Administration.

– As Nkechi Okorocha Thanks God For The Privilege Of Being A Governor’s Wife.

Governor Rochas Okorocha has said that he met a State that was in dire need of redemption and with little or no progress in development when he came on board as the governor in 2011, adding that such development necessitated the tagging of his government, “the Rescue Mission Administration”.

The governor spoke at a prayer meeting organized by WOMEN OF DIVINE DESTINY INITIATIVE (WODDI) with the theme “Thank You Jesus” on Thursday, May 16, 2019 at the Imo International Convention Centre (IICC), Owerri, adding that his administration has done well in all ramifications to justify the mandate of Imo people he has held in trust for eight years.

The governor stated “Mind you, my coming to Power was without the elites or the big names in Imo Politics. None was with me. But the masses of Imo State were with me and are still with me. So, because of the serious task of developing Imo State of our collective dreams and aspirations, I tagged this administration, Rescue Mission Administration. I swore before the Almighty God and declared that Imo Must be Better”.

He further remarked “But in the course of this government, I must confess to you that we have gone through a lot of troubles and opposition to get to where we are today. Today, the entire landscape of Imo is dotted with landmark and verifiable projects which are there for all to see”.

He said “The Rescue Mission Administration, knowing that education was the bedrock of our economic life, started and declared free education at the Primary, Secondary and Tertiary Institutions in order to attract our teaming children back into the classrooms. So, Imo State today is the only State where there’s free education from Primary, Secondary to the University. As a result of this development, Imo State has continued to hold the ace in the enrolment of the Joint Admissions and Matriculation Board (JAMB) in Nigeria for Seven years running now”.

His words  “My job as your governor has been made a lot mere easier by the hands of fellowship which you Imolites have extended to me including working with other key individuals that understand the essence of good governance with a high sense of duty to deliver. But let me use this opportunity to appreciate all the Rescue Mission team who have helped me in ways too numerous to mention in achieving these great strides for our dear State”.

The governor stated “I also do know that in the process of redeeming Imo, I did not have to follow the rules. So, my apologies to anyone whom I may have touched negatively in this process of governance. In all, I want to thank first of all, my lovely wife, Nneoma Nkechi Rochas Okorocha, my entire family and indeed all Imolites who gave us their support to get this far”.

The governor also commissioned some landmark projects of his administration on-line at the event. He has always claimed that he has more than one thousand verifiable projects to his credit and nobody or group has disputed the claim.

In her speech, the leader of WODDI and wife of the governor, Dr. (Mrs.) Nkechi Okorocha averred “I want to thank God Almighty that I was privileged to be the wife of the governor of Imo State. Again, let me use this opportunity to thank the man His Excellency, Owelle Anayo Rochas Okorocha (OON), who God used to make me stand before you as the wife of the Executive Governor of Imo State. For me, today is a wonderful day, to take stock of how it all started, to take stock of all the experiences and to take stock of the great achievements recorded under me, with the Women of Divine Destiny Initiative (WODDI) under the watch of the Rescue Mission Administration”.

She added “Through the She Needs A Roof Projects people who ordinarily will not have roofs under their heads, through the mercy of God, over 200 of them can be bold to say that they are landladies. This is another great opportunity to stand here and say a very big Thank you to Imo women for their unflinching support to the Rescue Mission government of Imo State. I must say that your love for me is too much and for sure, I would indeed miss you”.