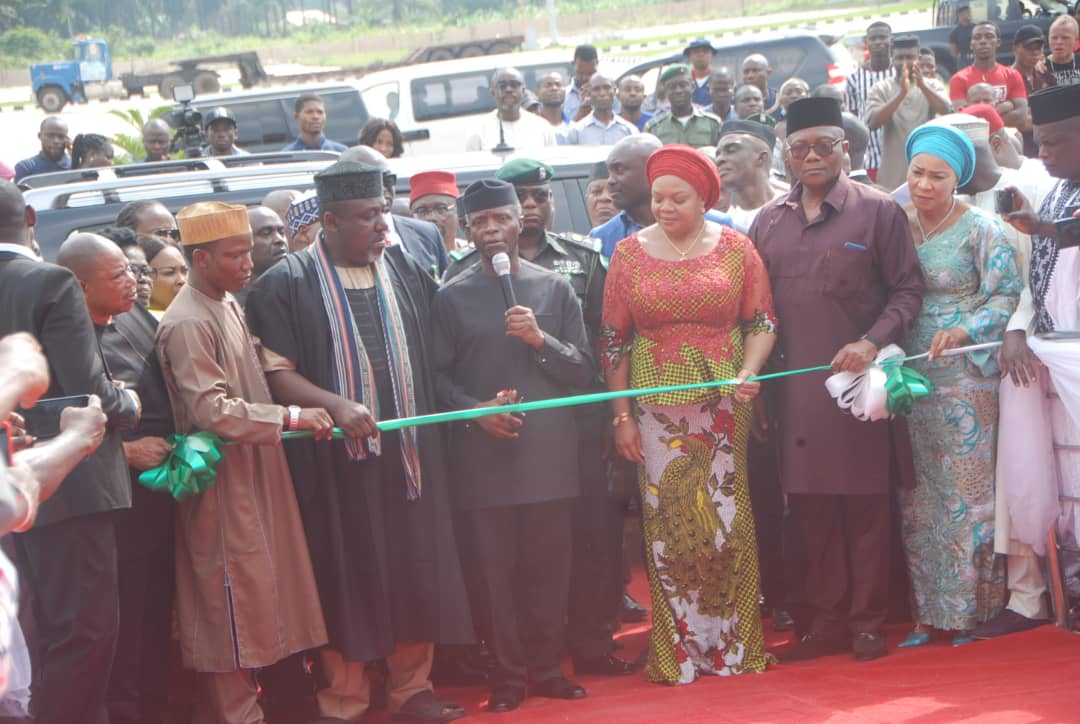 – As Governor Okorocha Thanks President Buhari For Granting The Approval

President Buhari had spoken while Commissioning the Sam Mbakwe International Cargo airport on Thursday, May 23, 2019, Stating “Our focus has always been on job creation and I want to thank Governor Okorocha for consistently supporting the Federal Government in its job creation programme”.

According to the President who was represented by the Vice-President, Professor Yemi Osinbajo “the International Cargo Airport will certainly create more job opportunities apart from the Commerce it brings to the South-East part of our Country, but to also all parts of the Country. What we are seeing here is a landmark achievement I had a previous opportunity to inspect the warehouses of the Cargo terminal a couple of months ago, even that time it struck me as a world class facility which all of us as Nigerians ought to be proud of. Mr. President not only approved this airport but also one that he is very proud of and has spoken about it in so many fora”.

He added, “Everybody complains about the slow process of clearing goods at the ports. This is a welcome circle that will make it easier for people to clear their goods and speed up commerce all over the Country. Congratulations Mr. governor, I know that for Imo State, this is only the beginning in seeing that all your dreams come true. This Sam Mbakwe International Cargo airport will bring a lot of progress to Imo State and South-East region of our Country and posterity will remember you for this”.

While Commissioning the new Prisons Headquarters Prof. Osinbajo said “Let me say on behalf of the president General Muhammadu Buhari that I am here to Commission the Nigerian Prisons Owerri. I congratulate Governor Okorocha for his support to the Federal Government of Nigeria in their efforts in handling the criminal Justice System. Your role as Chief Security Officer speaks for itself. You have done well”.

Governor Rochas Okorocha in his speech Stated “Let me start by thanking Mr. President for giving approval for Imo State Government to build this Federal establishment. The idea of this project came to us as a welcome development, considering the fact that Igbos especially Imo people, their entire life rotates around commerce and commercial activities. Most of the people that make up Lagos as it concerns importation are Igbos. So we decided to bring it back home for them by building this International Cargo Airport”.

The governor remarked “Again, it is important I inform you that this airport was built by the sweat of Imo people. There was never a time that the Federal Government built it for them. Today, we are adding another dimension to it by making it an International Cargo Airport. When you Commission it today, it now means that Imo State is now linked to the rest of the world. You may not need to go to Abuja, Lagos, China, or London or anywhere in the world to clear goods. This will equally create Job Opportunities for our people who have been longing for things like this. Very importantly Mr. President, it is important to note that this project was funded 100% by Imo State Government, in order words we are asking for refund as soon as possible”.

Aside the International Cargo Airport, other prime projects of the governor also Commissioned by the Vice-President on behalf of the President include the Ultra-modern Police Headquarters, Magnificent Prisons Headquarters, Free Mothers & Children Hospital, Rochas Foundation Road, Somto Hospital among others.

It should be recalled that the Vice-President was in the State last weekend to also Commission some projects.