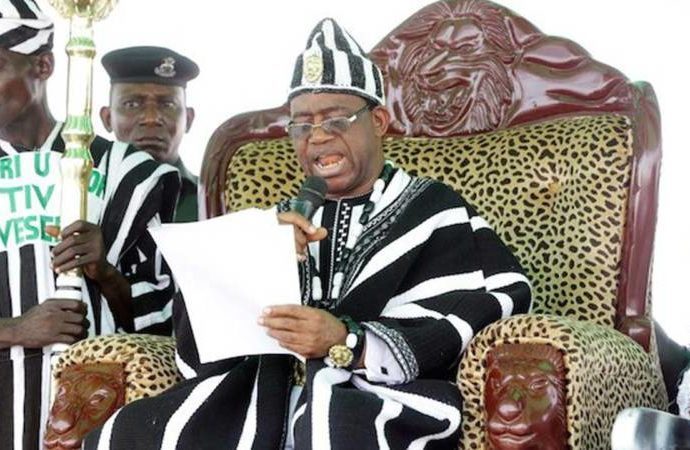 The Tiv paramount  euler, Tov Tiv,  His Royal Majesty, Orchivirigh Prof. James Ortese Ayatse, has condemned in strong terms the clash between Shitile and Ikyurav-tiev communities in Katsina-ala Local Government Area which has claimed lives and destroyed properties worth millions of naira.

The Tor Tiv has also condoled with the families that lost their loved ones and properties in the crises and prays that the good Lord will comfort and strengthen them at this very difficult time.

The paramount ruler in a press statement signed by his Media Assistant, Freddie Adamgbe,  commended the timely actions of the Local Government Council Chairman and that of the Governor and Government of Benue State and the Security agencies in intervening to prevent further escalation of the crisis and to ensure the return to normalcy in the affected areas.

He sends his condolences and sympathies to the members of the security agencies that paid the supreme price and suffered casualties in their efforts to stop the hostilities.

The Tor Tiv also noted with sadness and grave concerns the persistent violent crises and criminal activities in the Sankara intermediate Area and called on the prominent sons and daughters and elders of the area to urgently meet with him and the Tiv Area Traditional Council to find a way to permanently end the ugly situation.

The Paramout Ruler once again admonishes the waring communities to sheath their swords and embrace dialogue to resolve the differences that led to the crisis no matter the level of provocation.

The Paramount Ruler expressed belief that it is only when we leave together in peace and unity that the development of our communities and people will be facilitated and guaranteed.

He prayed the Almighty God to have mercy on the Tiv nation and grant her peace and protection from all her enemies.

Also the All Progressives Congress, APC, governorship candidate in the last elections in Benue, Barr. Emmanuel Jime has commiserated with the families of those killed in the bloody clashes between the Shitile and Ikyurav-Tiev communities of Katsina-Ala in Benue State.

Hon. Jime who called on the warring communities to sheath their swords and embrace peace, frowned at the wanton destruction of lives and properties in the area.

Jime in a statement signed by Deputy Director Communications in the Jime/Ode campaign Council, Tordue Salem lamented the persisting clashes between the Tiv and Jukun Communities of Benue and Taraba States and sued for peace among the communities.

He called on community leaders, political leaders and security agencies to double their efforts in addressing the  insecurity in the areas.