Emotional Tillerson tells his side of the story

Just hours after his very public firing Tuesday, an emotional Secretary of State Rex Tillerson came to the State Department briefing room to tell his side of the story, saying he had received a call shortly after noon from the president aboard Air Force One, and had spoken as well with White House chief of staff John Kelly.

He did not otherwise mention or thank President Donald Trump.

Tillerson first learned he was being dismissed when Trump tweeted this morning that he was nominating CIA Director Mike Pompeo as his new secretary of state. 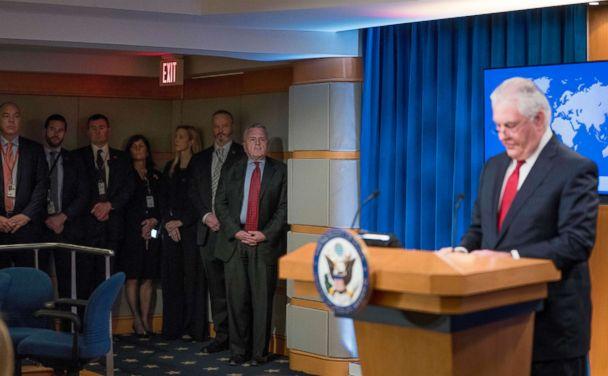 Tillerson announced he was delegating all his responsibilities to Deputy Secretary of State John Sullivan effective at the end of the day Tuesday and that his commission as secretary of state would terminate at midnight March 31. In the interim, he will deal with a few administrative issues and work toward a “smooth and orderly transition” for Pompeo.

Sullivan was in the room with Tillerson when he spoke, with a half dozen other top aides, including his chief of staff Margaret Peterlin. It’s unclear now if Peterlin and other top officials with close ties to Tillerson will lose their jobs, too, but Tillerson encouraged “those confirmed [by the Senate], as well as those in acting positions, to remain at their post and continue our mission at the State Department and working with the inter-agency process.” 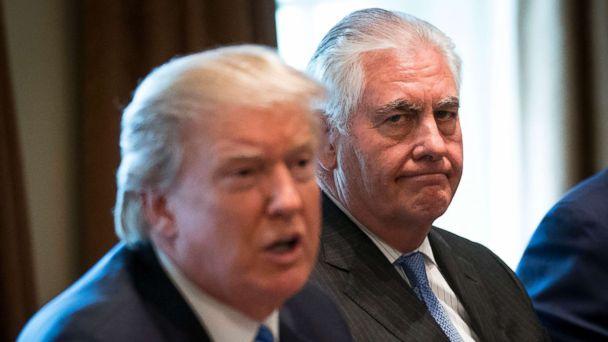 Noticeably absent was Under Secretary of State for Public Diplomacy and Public Affairs Steven Goldstein, who earlier in the day released a statement refuting the White House’s narrative on when and how Tillerson found out he was being fired. Just hours after that, Goldstein – the fourth-highest-ranking official at State and one of the only Trump appointees – was fired as well, after three months on the job.

With Tillerson and Goldstein gone, nearly all the top positions at the State Department will be left vacant. Among the six Under Secretary roles, four have been vacant, a fifth now is open with Goldstein’s firing, and the sixth is filled by career diplomat Tom Shannon, who announced last month he is retiring. Shannon, the Under Secretary for Political Affairs, has said he will stay on until a replacement is found. More than a dozen assistant secretary roles remain vacant or filled by senior diplomats in an acting capacity, and overseas, more than three dozen ambassadorships are empty, with the mission’s number two leading the embassy day-to-day.

Tillerson was visibly emotional in the briefing room, especially when he first walked up to the podium and began addressing the press, with his voice cutting out at times and his face red.

It was just last week that Tillerson got choked up when addressing why he took the role in the first place. At George Mason University Tuesday, he recounted his father’s and uncle’s military service – and how he missed the draft during the Vietnam War by three numbers. Instead, he went off to college and worked 41 1/2 years for Exxon Mobil, and “as I reflected on things at that point, I said I hadn’t really done anything yet. It’s my time to serve, and that’s why I’m doing it,” he told the audience.

The former CEO, who says he still thinks of himself as an Eagle Scout, said he saw the job as a form of serving his country. Despite his disagreements with Trump on policy, personnel, and leadership style, he remained committed to the role.

“I look forward to having a very, very successful 2018,” he told CNN in January. “I intend to be here for the whole year.”

Tillerson’s father passed away the week before his comments about his father’s military service. He had been home for a week dealing with that, before his speech Tuesday and a week-long trip through Africa.

It was in the middle of the night in Nairobi, Kenya, that he was awakened by White House chief of staff John Kelly. While the White House says Kelly told Tillerson then that he was fired, a senior State Department official said that Tillerson was only warned that such a tweet may be coming.

But Trump has tweeted about his cabinet secretaries before, only to keep them in place. For months now, he has pilloried Attorney General Jeff Sessions, but has not yet fired him.

Tillerson cut short the trip to Africa, returning early Tuesday morning at 4 AM.

It was hours later that the news officially came in Trump’s tweet. 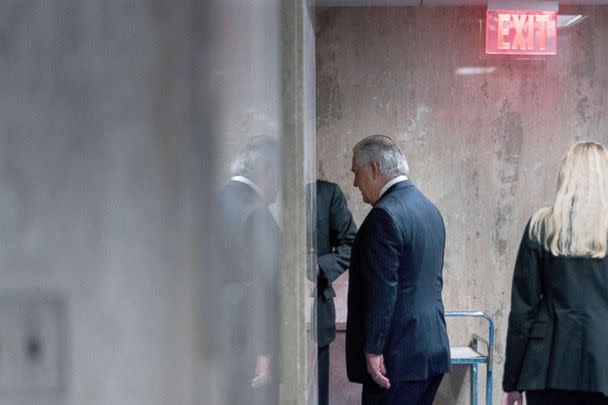 In his goodbye address, Tillerson pointed to progress on North Korea, Afghanistan, and Syria as some of his accomplishments and thanked his State Department colleagues, as well as Pentagon officials and members of the military, for the “privilege” of serving with them.

“To the 300-plus million Americans, thank you for your devotion to a free and open society, to acts of kindness toward one another, to honesty, and the quiet hard work that you do every day to support this government with your tax dollars,” he said.

“I’ll now return to private life, as a private citizen, as a proud American, proud of the opportunity I’ve had to have serve my country,” he finished, leaving the room with a wave and without taking questions.