The political intrigues within the All Progressive Congress [APC] appears a permanent fixture both on the national and state level. This is as information available to 247ureports.com indicates the running battle between the Kano State governor, Ganduje and the former Kano State Governor, Kwankwaso has reached a new crescendo that had resulted to a bloody clash between the followers of the State Governor and the followers of the former State Governor at the Emir’s Palace during the sallah celebrations.

Governor Ganduje had deputized the then Governor of Kano State, Kwankwaso before ascending to the seat of Governor. Prior to becoming the Governor, the relationship between Ganduje and Kwankwaso had fractured owing to what Ganduje explained as frivolous spending by the Kwankwaso administration towards the final days of his term as governor. Ganduje claimed Kwankwaso left the coffers of the state government in the red.

The anti-graft agencies were reported to have gone after Senator Kwankwaso in connection with the allegations levied against him by Governor Ganduje. The Economic and Financial Crimes Commission [EFCC] had invited Senator Kwankwaso for a closed door interview. Many of the aides who had served under the Kwankwaso administration have been interrogated by the EFCC. The case remains ongoing.

But the Kwankwaso’s trouble appears to go beyond his travails with the EFCC.

Senator Kwankwaso remains a member of the APC but embattled. A competent source in Kano tells 247ureports.com that Senator Kwankwaso had left the APC in practice and had been hobnobbing with People Democratic Party [PDP] chieftains. The source adds that Kwankwaso’s attempt at re-entry into his former party, the PDP had been problematic owing to the presence of a former governor of Kano State, Ibrahim Shekarau. “He cannot find comfort in APC because of Ganduje and he cannot enter the PDP because of Shekarau”, said the source who explained that Kwankwaso’s presidential ambition has further put his standings at the national level with the APC and the Buhari led presidency at jeopardy.

Presently, the “APC is solidly behind the President” and anyone perceived “as undermining President Buhari’s second ambition is viewed as a traitor”. 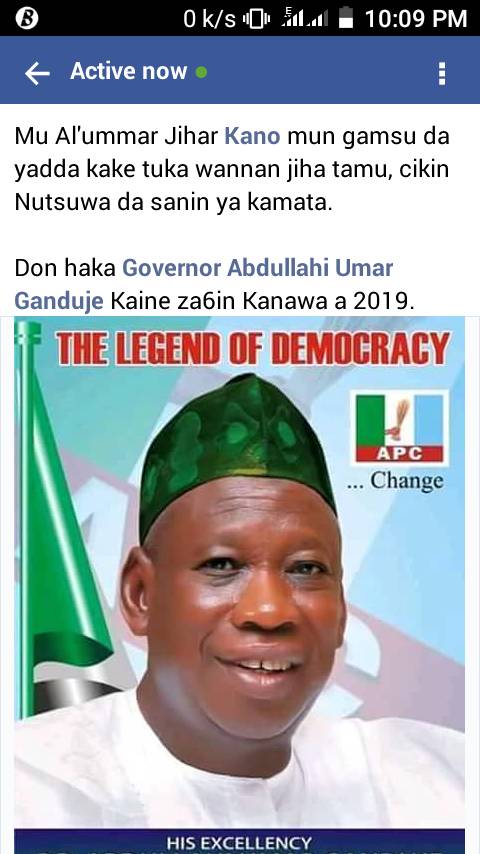 It is to this extent that a season of abandonment appears to have befallen the former governor, Senator Kwankwaso. The Governor, along with a slew of supporters recently tossed their red cap – which symbolized membership in the kwankwasiyya group – into a burning flame of fire.  They adopted a new colour cap, the green cap symbolizing Nigeria.