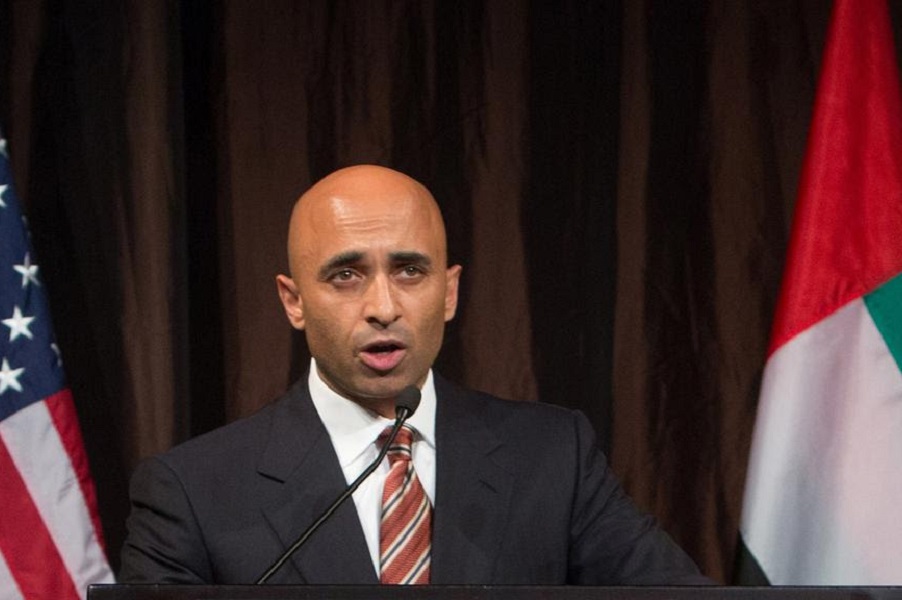 Few months ago the email account of the UAE’s ambassador to the United States Yousef Al-Otaiba was hacked. The emails contain noteworthy information of the dialogues between this influential ambassador and major American figures in the U.S foreign policy, such as Robert Gates and John Hannah.

HuffingtonPost and The Daily Beast  confirmed that Al-Otaiba’s email account has been hacked and part of its content was leaked.

Al Otaiba is a recognizable figure in D.C.’s diplomatic circles, who has been called “the most charming man in Washington,” so the full tranche of emails in the hackers’ possession is sure to include friendly exchanges between the ambassador and a raft of movers and shakers inside the Beltway.

The excerpts provided to The Daily Beast include several emails between Al Otaiba and former Obama Defense Secretary Robert Gates, an influential Washington consulting firm that counts companies like ExxonMobil as clients.

The leaked emails are 55 pages and The Daily Beast describes the documents as photographed versions of printed copies of Al Otaiba’s emails dating from 2014 to 2016. The sample files contain a mundane to-and-fro between former Defense Secretary Robert Gates and the ambassador from 2015, when Gates had settled into his current job as a lobbyist.

Among the emails, there are confidential information which shows Gates has had close connections with Sheikh Mohammed bin Zayed:

The night before former U.S. Defense Secretary Robert Gates was scheduled to speak at a high-profile Washington conference on Qatar, for instance, Otaiba wrote him an artfully worded note. “The subject of the conference has been a neglected issue in U.S. foreign policy despite all the trouble it’s causing,” the diplomat wrote. “Coming from you, folks will listen carefully.”

Gates emailed back that he thought he had “the chance to put some folks on notice.”

Otaiba offered to buy the former Cabinet official lunch and passed along a message from his boss back home. “MBZ sends his best from Abu Dhabi,” the ambassador wrote, using a nickname for UAE Crown Prince Muhammed bin Zayed. “He says ‘give them hell tomorrow.’”

In another part of the documents we can see that FDD Senior Counselor John Hannah had a close friendship with Al-Otaiba. Hannah claimed that he is honored to be in the company and friendship with the UAE. Hannah and Al-Otaiba also repeatedly discussed about Qatar. According to the emails they intended to discuss about “Al Jazeera as an instrument of regional instability.”

While hackers addressed themselves as GlobalLeaks, undoubtedly Qatar intelligence service was behind the scene. Apparently, since Qatar found the Emeriti-American plots, it leaked the documents. In other words, this move by Qatar could be counted as declaring war against the UAE.

As the aftermath of this event, the UAE has remarkably increased its attempt to isolate Qatar. For the first step Sheikh Mohammed bin Zayed went to the U.S. to visit his old friend and business partner Donald Trump. Zayed’s plan for involving Trump into the Gulf affairs was that firstly make the connection between the U.S. and Saudi Arabia strong and then follow up his goals through their relations.

Though during the campaign, Trump was against having relations with Saudi Arabia, Mohammed bin Zayed could make the connection between the two parties by providing for both sides opportunities to serve their own interests via this bilateral relation. Trump successfully makes more than $600 billion deals with Saudi Arabia and Mohammed bin Salman enjoys having the support of Trump for replacing Mohammed bin Nayef and ascending to the throne as Crown Prince and accordingly become the King of Saudi Arabia in near future. The result of this plan for Mohammed bin Zayed was that both of his old friends commensurately helped him to put pressure on Qatar and carry out Qatar blockade plot.

In other words, Mohammed bin Zayed wisely isolated Qatar and put the country in severe crisis. Thus, while President Trump claimed in his tweet that the Qatar crisis is because of his visit with the Arab states’ leaders in Saudi Arabia summit, Mohammed bin Zayed was the core strategist of this plot. He succeeded to ingeniously seduce Donald Trump and Mohammed bin Salman so that to make use of them as his own puppets for achieving his goals against Qatar.

To sum up, Qatar crisis is the result of the opportunistic approach of Mohammed bin Zayed laying his strategic foundation on the powerful influence of the U.S. and Saudi Arabia.