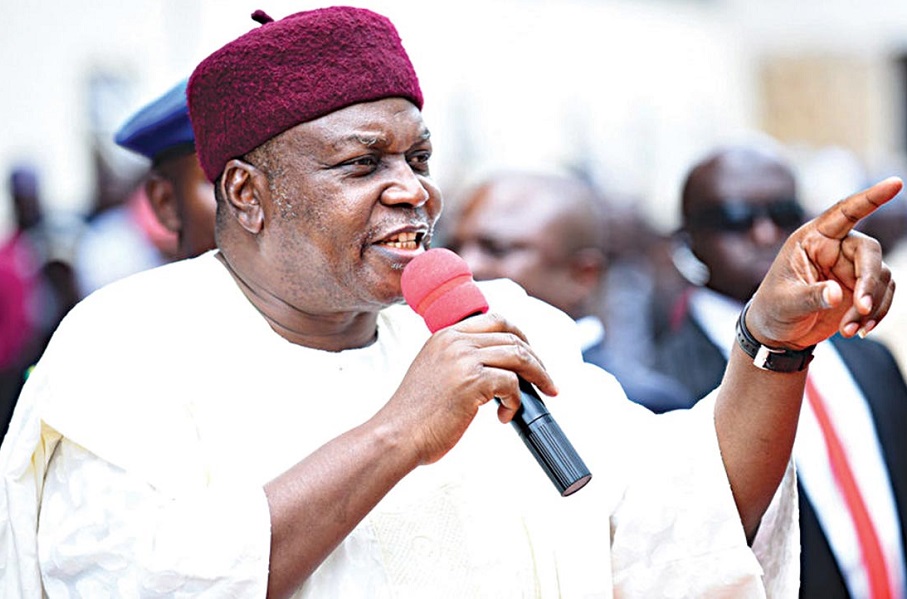 [poll id=”28″]
Last Saturday Night was memorable as both visiting editors from Lagos and some of their Abuja-based counterparts had dinner with Governor Darius Ishaku. As a Saturday Night performance, the governor put up an award winning spectacular display. Call it a razzmatazz and you would be right. But it was also a serious business. The venue was the tastily furnished official abode of the governor at upscale Asokoro, popularly called T.Y. Danjuma House. A stickler to time, Governor Ishaku, modestly dressed in shirt and face cap ushered his guests to the dinner at about 8:00 pm. What started as an ordinary night of light banters, ended up as a seminar of sorts as Governor Ishaku donned his professorial cap to deliver a cerebral lecture on the state of affairs in Taraba state. He left no one in doubt as to his grasp of all issues pertaining to Taraba state: its attributes, its challenges and the ways forward.
The night started with mild and light hearted introductions in between meals. Some of the Editors were just meeting the governor for the first time even though their energy correspondents had covered the governor in the past when he was Minister of Power. The governor asked after one or two names he worked with back then. The cuisine was mostly light for that time of the evening with exotic array of drinks. The governor welcomed his guests after the self introductions. He said the dinner was something he wanted to have with the Editors since January but was hampered by time constraints. Speaking on the need for a robust relationship with the media, he said he has always strived to ensure good working conditions for practitioners in the state. He said, “I’m sure the media would consider me there friend. I also honestly believe that the media is the last hope of the common over and above even the courts because you work to ensure social justice.” At this point, one of the Editors smiled and said, “well, even sometimes we have to come to the judges rescue. So yes you are right about this.”
On what he has been doing for the media in Taraba, Ishaku said, “I met a Sunrise Newspaper whose sun has set (general laughter) when I became governor. I’m going to ensure the Sun rises again but for now I want to ensure we finish the digitization of our electronic media. As I speak we now have 17 hours or so of television due to modern equipment. We have phased out close to two decades of obsolete gadgets. The same things we are doing to the radio station.”
Some of the editors have never been to Taraba state. Debo Abdullahi, Editor of Nigerian Tribune said he went to Taraba State in the 90’s. It was a harrowing experience he recalls especially in terms of transportation. Abdullahi also scaled the mountainous height of the Mambilla in an exhausting journey. But all that has changed, the governor told him and the other guests. Going to Taraba and climbing the Mambilla had been made easy. How? Hear the governor: “One of the things I did was to open up the air space. The airport has been lying down there with no visible or even serious aviation happening there. So we solved that by finishing the runway. I got Overland Airline to start coming. I knew Overland when I was minister of power because it was easy to take them and go round the power facilities around Nigeria. So I spoke to them and they agree to be coming. That’s how we now have three flights per week. It’s really changed how business is been done. You know, people, investors alike can come into our cities and do business now with ease. The roads have also been improved. We have good roads from Jalingo up to the Mambilla reducing the hours spent on the road.”
On the menu was the Highland tea. The governor saw how some of the editors glanced at the product and relished it. “You seem to like it,” he said, raising one of the packs. ” I met this wonderful tea dead. So I did something. We worked hard to ensure we generated electricity at Kakara. Electricity is literally headquartered on that Mambilla. The dam there can give us close to 4000MW. I got to work. And we enliven the Kakara hydroelectricity. That’s how this tea industry revived. Now, Highland tea is back. Jobs have been restored too. The beauty of the Mambilla is that it is so endowed. It is Nigeria’s Camp David. People even live longer because of the climatic conditions. We have the largest herd of cows in Nigeria up there and they are ranched. Yes. Ranching is already happening there even before our law on the same issue.”
The editors all said they would love to visit the Mambilla and they got the governor’s promise that he would soon take them there.