We the Indigenous People of Biafra (IPOB) and it’s leadership worldwide view the childish antics of the All Progressive Grand Alliance (APGA) as a jealously laden, derisory attempt to deflect attention away from the fact that APGA as the governing party in Anambra State has been responsible for the death of innocent Biafrans numbering over 2000 since the formation.

The two notable instances being the infamous Ezu River bodies and the heinous massacres at Nkpor and Head Bridge Onitsha respectively. Willie Obiano, from APGA,  superintended the wholesale slaughter of innocent unarmed Biafrans on different occasions. The party employed wholesale slaughter of their people as a way of stopping the agitation for restoration of Biafra not knowing that we are prepared to keep dying until Biafra is restored as we swore.

In the purported letter written by the party in Anambra State threatening a showdown with IPOB led by Mazi Nnamdi Kanu which gave order of no election in all Biafraland starting from Anambra Gubernatorial election come November this year 2017, APGA failed to mention the fact that Biafrans and IPOB in particular campaigned and voted for both Peter Obi, Rochas Okorocha and Willie Obiano but were rewarded with shoot at sight orders issued by both men.

It is very unfortunate that APGA as a political party preoccupied with feathering the nests of a select few, underestimate the desire of every genuine Biafran to be liberated from the slavery and bondage that Nigeria has come to represent. APGA is motivated by personal greed and self aggrandisement unlike IPOB that is purely focused on the liberation of our people and by extension, other oppressed people in Nigeria.

The spurious and childish accusation that our leader Mazi Nnamdi Kanu who is also the Director of Radio Biafra and Biafra Television to stop parading himself as emperor smacks more of envy borne out of desperation than a reasoned assertion. There is no one more humble than the IPOB leader, that is why he is loved by millions, so the little anti Biafra rant by APGA will only encourage us the more to ensure that the lockdown of Anambra State come 18 November 2017 is total and compete. We would prove to APGA that our leader Mazi Nnamdi Kanu has never in his life, since the inception of IPOB, indulged himself or arrogated any powers to himself. He has advisers, but more critically he is under the guidance of the supreme Almighty Creator Chukwu Okike Abiama that sent him. Mazi Nnamdi Kanu is an easy going, caring and deeply passionate person when it comes to Biafra. The perverse insinuation that he made himself a god is a clever ploy designed to appeal to the envious nature of certain individuals who wish to be like him but can never.

It is insulting for a party that supervised the killing of thousands of IPOB family members, which they connived with the APC Government of Buhari to cover up, to be advising the same people they killed to turn against IPOB.  History will remember the All Progressive Grand Alliance (APGA) as the party that murdered those that voted her into power.

The founding father APGA General Dim Chukwuemeka Odumegwu Ojukwu will be turning in his grave because of the way Willie Obiano and co used the party as a vehicle to murder thousands of people seeking out collective freedom. Today, incompetent hands and political contractors in the society have ruined the party, they have turned the party into a killer political machine that appear harmless during campaigns, only to unleash terror on innocent citizens once they are enthroned in office.

We are not deterred by the noise coming from APGA because after November 2017 they will cease to exist as a political force because they killed innocent Biafrans fighting for the liberation of all of us. We stand strongly to tell the whole world the position of IPOB under the command leadership of Mazi Nnamdi Kanu that we IPOB will not be participating in any party politics or electioneering in Anambra State or elsewhere for that matter. All we are asking for is a date for referendum not war so the people of Biafra can decide their fate in this abominable entity called Nigeria. 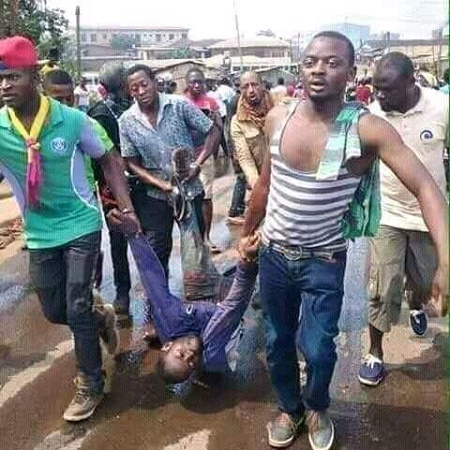 The political vampires  who are APGA members and other politicians in Biafraland claiming to be lovers of Biafra and her freedom should know that if Nigeria Government fail to give Biafrans a date for referendum to ascertain the will of the people in no distant time, there will be no more elections in Biafraland.