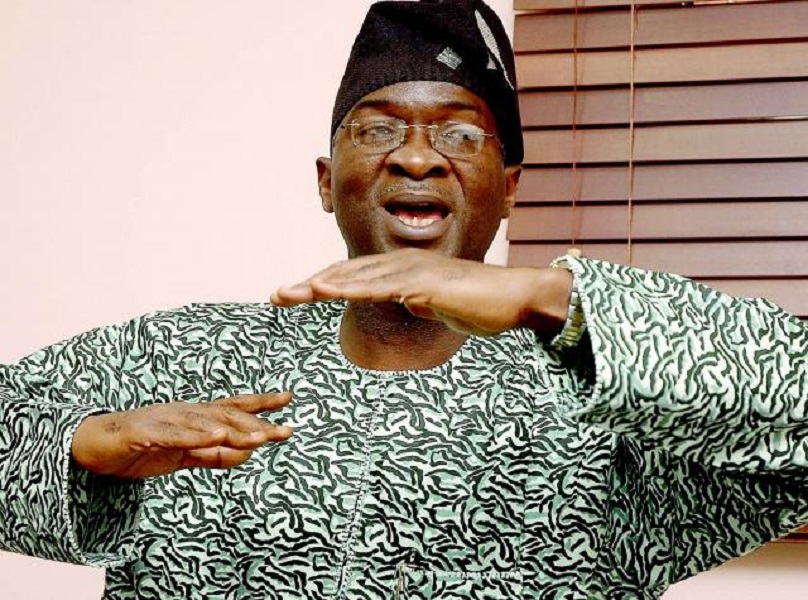 The Senate has cautioned Minister of Works, Housing and Power, Mr. Babatunde Raji Fashola, SAN, to stop spreading wrong information and half-truth about the 2017 budget as the legislators worked to ensure equity across the country on all new and outstanding projects.

In a statement by its spokesperson, Senator Aliyu Sabi Abdullahi, the Senate noted that Mr. Fashola did not give members of the public full details about the Lagos-Ibadan Expressway, which has been on a private finance initiative from the beginning because he would prefer an arrangement that allows the Ministry to continue to award contracts and fund the project through Government budgetary allocation at a time when the nation’s revenue is dwindling and at an all time low.

Abdullahi stated that the Bureau of Public Procurement, and the Federal Executive Council in 2013, approved the reconstruction, rehabilitation and expansion of the Lagos-Ibadan expressway as a Public Private Partnership project using the Private Finance Initiative, with the Federal Government providing about 30 percent of the funding while the balance shall be provided by the private sector. The project was on course for completion by end of 2017 when the private finance initiative was being implemented, with over 30 percent completion rate attained as at early 2015.

Abdullahi further noted that in a blatant disregard for existing agreements, constituted authorities and extant laws,  Fashola on assumption of office got Government through the Ministry to start voting money for the implementation of the project.

“Even as at last year the 2016 Appropriation Act voted N40 billion for the project on the insistence of the Ministry and only N26 billion was released. If we had known, the rest N14 billion could have been allocated to other critical roads across the country”, he said.

“In the spirit of consensus building and effective stakeholder engagement, the Leadership of the Senate met with key relevant stakeholders, including the Ministries of Works and finance. It was agreed that we should give the Private Finance Initiative a chance to complement Government’s resources in the delivery of critical infrastructure assets across the country. Hence, in this year’s budget, we have engaged with the Government and private sector groups who have assured that they will resume funding of the project. So, we only provided the fund in the budget that would ensure work does not stop before the funds from the private sector start coming in .What we reduced from Lagos-Ibadan Expressway in the 2017 budget estimate was spread on Oyo-Ogbomoso road in the South-west, Enugu-Onitsha road in the South-east, and two other critical roads in the North-east and North-west; and this was done to achieve equity. The Minister should realise he is Minister for the entire country and not just that of Lagos State.

“It is our view that the Federal Government cannot fund the reconstruction and maintenance of all the 34,000 kilometres of roads under its care. We are looking for private funds for some of these roads, particularly those with high potentials of attracting private investors. These include the Enugu-Onitsha road, Kano-Abuja road and Abuja-Lokoja road. It has been our hope that the Lagos -Ibadan road would be a model for private sector funding of infrastructure in the country”, the spokesman stated.

He added that Fashola knew that Federal Government cannot fully fund this road for completion by 2019 as he is promising Nigerians. “It’s deceit of the highest order. Just going by the last two years of funding where an average of about N30b per annum was released then the nation would have to wait for the next six years for completion of the work .But with Private sector Finance Initiative, this project can be completed on time because full funding will be provided and there will be more certainty”, he stated.

Abdullahi noted that since Government did not have enough money and/or unlimited resources to provide all the needed road infrastructure on a sustainable basis, the use of funds from the private sector to complement Government’s resources would ease pressure on the annual budgetary provisions for infrastructure provision, as more money will be spent on less commercially viable roads that would not ordinarily attract private sector investment as well as other social services like education, health and human capital development.

“The Minister’s statement is in bad taste and we believe he has been quoted out of context as an experienced public servant with over 15 years of high level responsibility will not be uttering such statements. He should desist from spreading half-truths. When he said the National Assembly imported projects into the 2017 budget, he did not mention that these include the 26 projects which the Federal Government approved in the 2016 budget, awarded contract for them in January 2016, but totally omitted them in the 2017 budget. One of them is the Abuja-Kaduna road. These ones would have become abandoned projects. We reduced funds across board to make provision for these omitted projects that  are of critical importance to the socio-economic development of the country in line with equity and fair play.

“Mr. Fashola obviously wants the Federal Ministry of Works to have many construction projects it can award contracts for and that is why he would always oppose any attempt to allow the private sector financing initiatives through Public Private Partnerships or other levels of Government to fund construction of roads under the control of the Federal Government. That was why he waited until he was arm-twisted on the Lagos Airport road before he allowed the Lagos State Government take up the reconstruction, using private funds. Same thing happened to the proposal for the Apapa Wharf road, which was frustrated for over a year before the stakeholders reined in the Ministry to grudgingly approve that Dangote and Flour Mills should take over the project.

“It should also be explained that nobody introduced budgetary provisions for the sinking of boreholes and construction of clinics under the budget of the Works division of the Ministry. However, the Housing division would ordinarily have provision for such facilities in its estimate, so as to meet the Sustainable Development Goals as provided for by the United Nations . This is aimed at reducing slums and improve the well-being of our citizenry.

“The National Assembly already have an agreement with the Acting President of the Federal Republic of Nigeria, Professor Yemi Osinbajo, that if for example, the Private Finance Initiative does not materialize to provide the needed funds for the completion of the Lagos-Ibadan Expressway, just as in other areas where government has issues with the budget, the instruments of Virement and supplementary budget can be used. This is as a result of our belief that it is one Government and we all share the gains of the successes and pains of the failure. However, with all these blackmail game and backbiting going on, they are already laying the foundation for the failure of the agreement with the Executive”, he stated.

Abdullahi added that the National Assembly acted in the national interest to ensure equity and fairness is achieved in the distribution of projects and to ensure that all sections of the country have representation in the national budget as guaranteed by the Nigerian constitution.