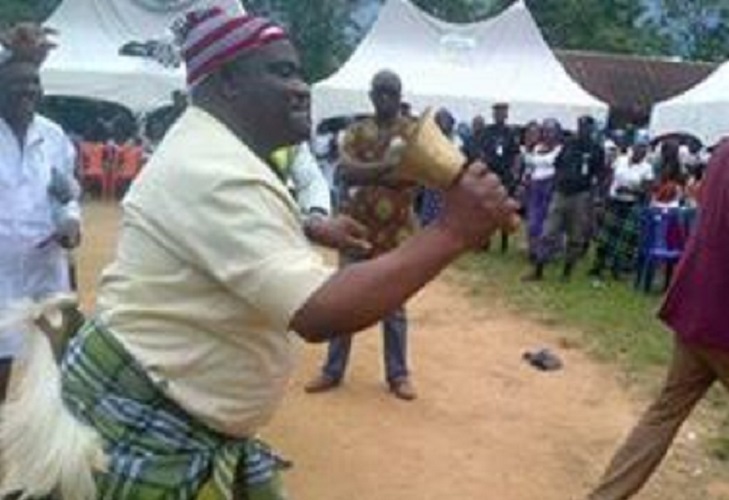 PRESS RELEASE
One of the leaders of All Progressives Congress (APC) in Rivers State and governorship candidate in the 2015 elections, Dr Dakuku Peterside, has accused the state governor, Nyesom Wike of causing so much embarrassment to the collective interest and aspirations of Rivers
people.

Peterside, who spoke against the background of some policemen sacked by the police authority for being involved in electoral misconduct while in the entourage of Wike, said actions of the governor were giving the state a bad name and rubbishing the achievement of her founding fathers.

According to police, the dismissed operatives were said to have disobeyed senior officers by preventing officials of the Independent National Electoral Commission, INEC, from moving election results of Emouha polling unit to the appropriate collation centre, an action that contravenes the provisions of Force Order 237.

The policemen, upon arriving the collation centre with Governor Wike, started shooting sporadically into the air without provocation, contrary to directive from Police IG against such act.

The former Rivers APC guber candidate during the 2015 general elections expressed deep reservations over the unbecoming attitude of Governor Wike, who he says has serially compromised security in the state and has been allegedly involved in several electoral
malpractices.

“What manner of a man is Wike, his desperation to become governor at all cost led to loss of many lives and destruction of properties. Since becoming governor, it has been bad news all the way. Many people, including security personnel have been murdered in different
parts of the state. Now, policemen have been dismissed from service all because of the inordinate ambition of one man.

“How can the governor of a state force his way into INEC collation centre and under heavy intimidation, harassment and threat to life, force the returning officer to declare a winner when the results of Emohua and Etche local government areas have not been collated.

“He clearly had no business storming the collation centre with policemen and his thugs. He took his immunity to a ridiculous level, thus endangering the lives of people and career of security personnel.

“Here is a governor who cries at every given opportunity, yet he is the one compromising every known government institution to serve to selfish ambition. Never have we had a governor who is so unsure of himself and what he says.

“Not too long ago, he told Rivers people not to participate in the probe panel set up by Inspector General of Police, but the same governor is now crying to Police IG to reveal those behind the killing of two policemen during the rerun election. Same man who vowed not to
fund security agencies in the state again is now the one saying he is ready to support them. How do you associate Rivers people with such a man who is not straightforward?” He queried

Peterside, who is also the Director General of NIMASA, called on Wike to “do some soul searching and reconcile himself with what should truly represent his direction and motive for governing the state. He is virtually in the news for all the wrong reasons.”