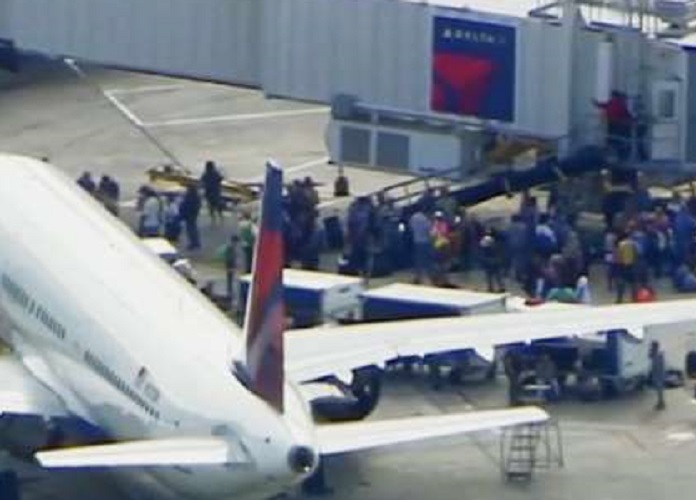 The Fort Lauderdale-Hollywood airport, located about 25 miles north of Miami, tweeted the incident occurred at a baggage claim inside Terminal 2. Calls came in around 12:55 p.m. ET.

© In the aftermath of the chaos, cameras outside the airport showed firefighters and other emergency personnel, plus large groups of passengers, standing on a tarmac. The Federal Aviation Administration did not immediately order an official ground stop at Fort Lauderdale-Hollywood, but officials were not letting anyone inside.

Bob Foster was inside another terminal, waiting for his flight, when crews evacuated everyone outside.

“We were told to hit the deck and we stayed there until we were given the green light to leave,” said Foster, speaking to MSNBC from an airport tarmac. “Needless to say, everybody’s pretty shaken up.”

The airport says over 73,000 travelers pass through each day.

The Bureau of Alcohol, Tobacco, Firearms and Explosives said agents were going to the scene to help state and local authorities.

A law enforcement expert said authorities will try to determine who the suspect is and whether there are other plots afoot.

“You’re trying to understand, is this a one-off guy? Regardless of motive, is he alone, or is there something else?” law enforcement expert Jim Cavanaugh told MSNBC. “We hate to think that way, but that’s the requirement for police commanders — to think that way.”

Fatal shootings at airports, where security is tight, are unusual. In November 2016, a disgruntled former employee opened fire at the Will Rogers World Airport in Oklahoma City, killing a Southwest Airlines worker.