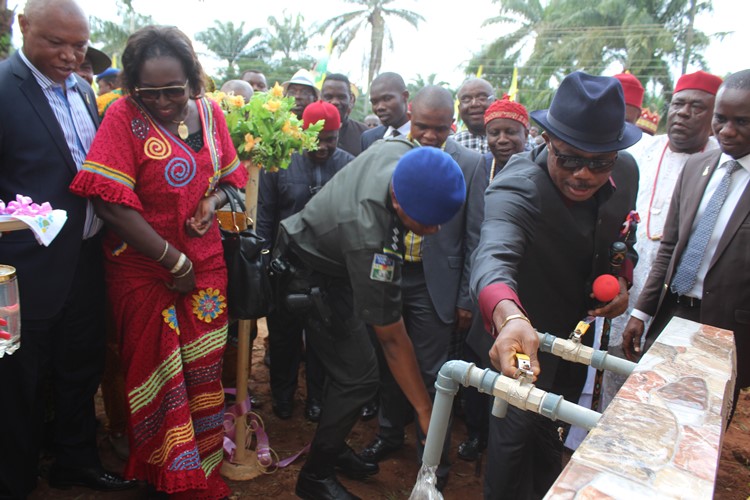 With the Edo, Ondo and Anambra States governorship election unfolding in that order, it promises to be a year – long outing for the showy Nigerian politician especially the breed that pride themselves as belonging to the gubernatorial class. On the heels of the close election that just brought Godwin Obaseki to office in Edo State, the Ondo and Anambra states governorship poll, from various indications, would generate greater fireworks. The parade has begun in earnest and the Governors in waiting have launched their activism with traditional fanfare.

In one respect, the politician shares the same fate with the broadcaster. The spell of silence is the broadcaster’s nightmare. And there can be no greater penance for the typical politician than abstinence from rhetoric. The American musician, Tony Wilson sang of him as ‘a man of many words.’ Now, if the politician, the Nigerian politician, cannot at other times be separated from his loquacious signature, his conduct in the prelude to election may well be captured in that fascinating, pompous word, tintinnabulation. And the notice – me – bells have not simply started ringing; in some cases they are clanging with an ardour that seeks to drown the siren of economic recession.

As turns out to be the case now and then, Anambra State, that land of profound contrasts, that historically unhinged estate with a resilience that reminds of the phoenix’s resurgence, is a major axis of this theatre. Pause for a minute on these stage setting declarations. ‘2017: PRP vows to sack APGA govt in Anambra.’  According to the story in Daily Sun of Monday, November14, 2016, a chieftain of the party assured that the party was battle ready to take over Government House, Awka, to ‘liberate the state from mediocrity in government circles.’ And from the social media came the thunder that the PPA is resolved to ‘unseat Governor Willie Obiano in 2017.’ Not to be outdone, a pioneer member but later disengaged functionary of the Obiano administration, still smarting from his removal,  recently declared in a syndicated interview in some newspapers that ‘Anambra State has been hijacked and it is presumptuous to believe that we will leapfrog, if we continue on the present course.’

Of course, engagements on public issues are an essential feature of democracy. Debates offer a useful means of exchanges and cross fertilization of ideas. It is by joining issues on matters of public interest that we achieve definitions, clarifications and fresh insights. With new knowledge, democratic standards are deepened and strengthened and the frontiers of good governance extended. But it must be added that this reward of the system is conditional on the merit of the input made by the actors.  To do otherwise would be akin to planting peanut and expecting to harvest pineapple. Anambra State deserves the best brand of leadership that can be realised in the prevailing circumstances and it would be worthwhile to hear those who offer to satisfy this need.  Yet, it would amount to over – indulgence to expect us to form impressions of aspirant – candidates not from their visions but from their ambition!

The context and manner in which much of Anambra’s recent gubernatorial journeys were set in motion speak more about private agenda, ego and adventure trips and less about a sense of public service. And the motive of private agenda could easily be to settle perceived political scores. But when the motivation is higher, there is invariably an access of visions. And it is not just an expression of visions but a striving to proffer alternatives to the prevailing order. Indeed, the people expect a display of superior vision to answer the question why they should transit from where they are. You do not leave a better paying job for one that offers less. The canvassers of change were overflowing with grandstanding but miserably lacking in the specifics of transformation. We have not heard a word on how to reduce dependence on federal revenue allocation. We have not heard a word from them on how to finance infrastructural projects in the face of declining oil production and revenue. We have not heard a word on how to handle agitations for wage increase and on reducing cost of governance.  There is as yet no word on practical steps to mitigate the unemployment situation. In the face of such conspicuous omissions, the outbursts and prattling on change in the next governorship election would amount to no more than comic relief at a time of national socio – economic distress.

It is however interesting to witness the sharp contrast in the scenario painted by the ambition – heady politicians and the situation on the ground, even attested to by credible personalities. In the same month of November 2016 that the governorship adventurists took to the alarmist road to draw recognition to themselves, Governor Willie Obiano registered the 27th company signing up to do business in the State with a total investment profile of $4.8 b! This feat recorded in 32 months of a weak and later recessive national economy is unprecedented in the history of states administration in Nigeria. In one week alone in the same November 2016, the Anambra State Government concluded the Memorandum of Understanding with Chelsea Group Limited to the value of N68 b for development of mechanized agriculture project in Omasi and another for the construction of Hills Housing Estate, Awka worth N1.4 t. The State Government is contributing N7.2 b in the Omasi agro venture covering 10,000 hectares of land for production of maize, cassava, soya bean as well as ethanol plant. For the 100 units residential houses of Hills Estate spread on 20 hectares, the State Government is investing ten percent counterpart funding.

There are universal criteria for establishing facts and drawing conclusions therefrom. The first is primary evidence, that is, the physical proof accessible to the investigator. The projects embarked upon by the Willie Obiano regime are all sited in the State, not in the moon, and Ndi Anambra do not need the sophistry of ambitious politicians to comprehend the evidence of their eyes. The second rule relates to the weight of expert analysis or the opinion of respected and non partisan commentators. It would be useful to gauge one or two such assessments.

The Metropolitan Catholic Archbishop of Onitsha, Most Rev Valerian Okeke gave this assessment on Thursday, October 26, 2016 at St Maximillian Kolbe Chaplaincy, Onitsha prison. ‘I know today that Anambra is paying salaries, crime and unemployment have also reduced but we have not gotten to the Promised Land yet in the State. We want to be such a place that other Nigerians when they come here; they enjoy the serenity and peace of mind. It is possible and on course, so, we will continue to pray for our Governor.’

Sunny Ogefere, a features writer and citizen of Delta State wrote in The Guardian of Thursday, October 27, 2016: ‘Governor Willie Obiano of Anambra State has been receiving accolades from within and outside the State. He has been credited with faithfully keeping the vision of Peter Obi alive and ensuring that sanity was brought back to Anambra and particularly to Onitsha, the economic nerve centre of the State. The Governor has also been noted for prudently managing the resources of the State to the extent that where most states of the federation are indebted to their workers in salary arrears; Anambra is increasing the wages of its workforce.’

There is a world of difference between the easy impressions we make of governance from outside and the reality that confronts us when we get inside. President Mohammadu Buhari confessed to members of the Senior Executive Course 38 of the NIPSS on Thursday, November3, 2016 that he ‘almost absconded’ from his mandate on meeting a depressed treasury. That should sober up our politicians who think that governance is going on a picnic.