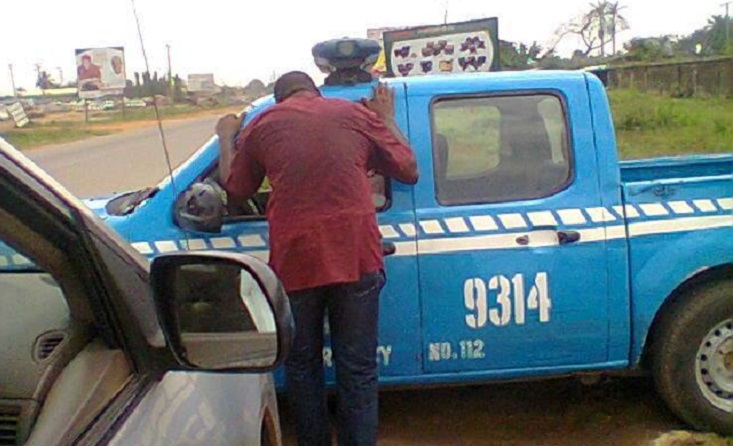 Motorists plying the Aba –Umuahia of the Enugu- Port Harcourt expressway has cried out the over the high rate of extortion of motorists by men of the Federal Road Safety Corps (FRSC).

They accused the FRSC operatives of standing on the middle of the expressway to stop motorists some of who are on high speed.

According to a commercial bus driver who plies the Aba –Umuahia route, popularly called ‘Nwa Aba’, “Sometimes, they hide their vehicles so that drivers won’t see them.  As soon as you approach, they will jump at you as flies do to rotten meat.  They will ask you about driving license, fire extinguisher, break lights, caution sign, even if you have these items complete, you must part with your hard earned money because they have a way of achieving their aims.”

247ureports gathered that in a bid to ensure that the motorists don’t pose much resistance to the excesses of the FRSC operatives, they have adopted the idea of stationing themselves close to military or police checkpoints, particularly close to the Army checkpoint after Isiala Ngwa junction and Naval base, Owerri-nta.

“We are calling on the authorities to check the activities of FRSC men on the expressway; they have become a threat to motorists, particularly commercial bus drivers. Even if your vehicles papers and other items are okay, they will harass and extort money from you. The worst aspect is in the manner they rush out to the expressway to stop us, last time a driver nearly hit one of them close to Arungwa junction. If you don’t cooperate with them; you can be delayed for an hour before they will ask you to go.”

A civil servant, who commutes from Aba, also told 247ureports.com that the excesses of the FRSC men have become unbearable. “We use to be proud of the FRSC, but today they are competing with other security agencies like the police in terms of extortion.  They have caused many accidents with the way they pursue vehicles on the road.This is shameful; most of them now behave like touts on the road. You can now imagine what they can do to motorists if they are now allowed to bear arms.”

Our correspondent gathered that men of the Aba Unit Command of the FRSC now mount checkpoints opposite their office along the Enugu –Port Harcourt expressway where they use their van to block and pursue motorists. ‎

When contacted, Aba Unit Commander of FRSC, Mrs Okowa Awassam said she is yet to receive any complaint of misconduct against her men by motorists.