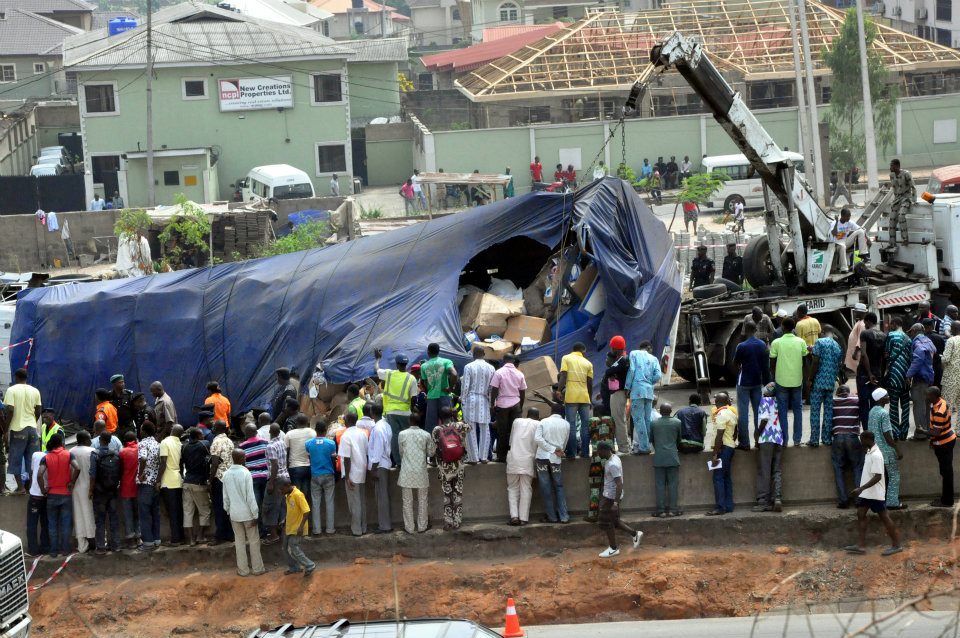 Travelers now spend almost the entire journey engaging in prayers for God’s protection while traveling in commercial vehicles and trucks along the Lagos\Ibadan expressway.They pray fervently not to be involved in  ghastly motor accidents that  have now characterized the expressway,among other tales of woe. 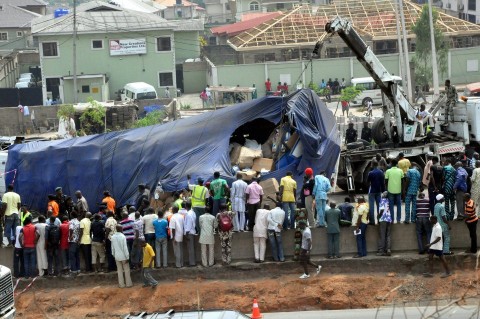 Bashed vehicles,blood stains and personal belongings of accident victims littering the road,are now sign posts of the daily tragedy that occurs along the road.

Just last week,Wednesday 16 April,2008,three occupants of a sleek new model black Honda Accord car with Lagos registration number had a collision with a truck.The car somersaulted several times before coming to a halt,while a middle aged man,clad in brown native attire survived the accident with serious bruises,the other two occupants,a lady and another man died instantly.

On the same day,at another spot along the road,some hundreds of meters to Ogere,a town along the expressway,two towing trucks made spirited efforts to rescue another truck,which found its way into a very deep pit,beside the expressway.

Curiously, investigations reveal that it is always celebration time for residents of villages along the road,when trucks conveying consumable and valuable products are involved in accidents.

One of such incidents,was when a petrol tanker fully loaded with petroleum products got involved in a ghastly accident which resulted in the spillage of its contents. Inhabitants of the villages near the scene trooped out in their hundreds to scoop fuel.

Sadly,although the regular and anti-riot policemen are noticeable at different spots on the road,their presence might be to fulfill personal desires, rather than get involved in rescue operations for accident victims and the  arrest of looters at accident spots.

A resident of Sapade,Moshood Ariyo,insists that the poverty in the land has driven a lot of nigerians into contriving ways of survival.”A number of accidents along the road involving trailers conveying goods,are the handiwork of people with intentions to steal the goods.In the case of accidents involving other vehicles,the thieves rob the victims”,Ariyo disclosed.

He,however called on the law enforcement agencies to check the trend,before it becomes institutionalized.

Investigations also reveal that  trailer and tanker drivers have for a long time now,converted the expressway to garages.Instances abound at Ogere and the Ibafo axis of the road. This, to a great extent has contributed to the road carnage.

Also,the reckless nature of commercial bus drivers already high on intoxicants,has sent the drivers and countless number of passengers to their early graves.

When this online medium visited a number of motor parks including the one at Ojota,Lagos and Iwo road,Ibadan,the urgent need to be intoxicated before embarking on any journey appears to be a major consideration.

This has resulted in passengers continuously controlling the driving style of the drivers all through the journey.

Sadly,the activities of kidnappers and ritualists have contributed a great deal to the almost helpless situation. With their focus on passengers,who cannot afford the transport fares at the various parks,they lower theirs to attract people hanging along the expressway.

Once inside the vehicle,the unsuspecting passengers are driven to unknown destinations,after they might have been hypnotized.There have been several reported cases of abduction for ritual purposes along the expressway.

While some have been fortunate to escape,others have never been seen again,after their abduction.

With the situation already becoming worrisome and frightening,it is the hope that the law enforcement agencies would live up to expectation,while passengers look on to God for protection.