ABUJA— There were indications, Sunday, that the embattled Pension Reform Task Team, PRTT, Chairman, Alhaji Abdulrasheed Maina, had fled the country to escape arrest by the police and other security agents on his trail.

Maina is reported to have moved to one of the Middle East nations, following the arrest warrant issued against him by the Senate and the decision by the Presidency to discipline him for absconding from his duty post without permission.

A close source to the PRTT boss, who had since been declared wanted by the police, told Vanguard that Maina left the country once it became clear to him that the Presidency, which had allegedly been shielding him, had given up on him.

The source said that with the partial withdrawal of the security men around Maina by the government, it was obvious to the PRTT boss that he should either report to the police or the Senate to clear himself over allegations of pension funds embezzlement. 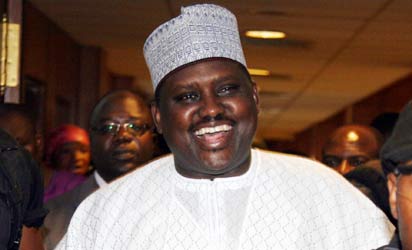 The source admitted: “I can tell you that Maina is not in the country as we speak. He knows very well that the game is up and there is no point for him to continue a fight he can hardly win convincingly.”

Maina in Saudi Arabia It was learnt from reliable sources that since arriving the Islamic country, Maina had been making frantic effort to reach out to influential persons in Nigeria to come to his aid in resolving the crisis between him and the National Assembly with the Presidency.

One source said that the Presidency was no longer keen on protecting Maina based on emerging reports that he might have misled the Villa to provide him with undeserved protection and support to work against the National Assembly.

The allegation that led to the ultimatum handed down by the Senate to the Villa  last week was that Maina had misappropriated billions of pension funds, which he claimed to have recovered from pension “thieves”.

The Senate committee probing Pension Funds Management under Maina accused him of mopping up pension funds from banks and depositing same in his chosen banks and making brisk business in the process while turning round to claim that he has recovered billions of Naira from thieves.

However, when he was summoned to appear and clear the air on the committee’s findings, Maina dodged but later instituted a N1.5 billion case against the Senate and the Inspector General of Police, who had declared him wanted following a warrant of arrest issued by the Senate President, David Mark.

But Maina’s Media aide, Hassan Salihu, said he was neither aware of Maina’s whereabouts nor what had happened to the heavy security personnel around him.

Senate bias against Maina Salihu, however, tried to dispel allegations of fraud levelled against Maina, accusing the Senate of bias and hatred against his boss.

Things came to a head for Maina last week when the Senate passed a resolution asking the Presidency to sack him within two days or face its wrath.

Although the Presidency had initially insisted that only the Head of Service could sack Maina, it subsequently changed its tone and ordered that urgent disciplinary action should be taken against him for absconding from his duty post without permission.

The Head of Service has since raised a team headed by a Permanent Secretary to sanction Maina, an Assistant Director in the Federal Civil Service.

It was not clear yesterday what step the government would take in order to fish out Maina from his hideout and how to go about it.

Police vow to arrest Maina Meanwhile, following reports that the Chairman of the Pension Reform Task Force, Abdulrasheed Maina has sneaked out of the country to avoid being arrested as directed by the Senate, Police authorities yesterday vowed that he will be hunted down where ever he is through all legitimate means.

Speaking with Vanguard on phone, Force Spokesman, CSP Frank Mba said that though the Police authorities were yet to ascertain the actual situation regarding Maina’s whereabouts, the warrant signed by the Senate President for his arrests still subsists even if he travels abroad.

His words, “I have no information to the effect that Alhaji Abdurashid Maina is out of this country or has sneaked to Saudi Arabia. However, as long as the warrant issued against him remains in force, the Nigerian Police will do everything within legal and legitimate means available to us, to seek him out, arrest him and hand him over to the Senate as mandated in that warrant”.

Asked if there was any possibility of the Police headquarters entering into an agreement with INTERPOL, International Police Organization, of which Nigeria is an executive member, to have him arrested and extradited to Nigeria, CSP Mba said, he was not in a position to comment on such possibility.

“All I know is that the warrant for Maina’s arrest is still in force and the Nigerian Police force has declared him wanted. And until we arrest him, he remains a wanted man by the police”.