The gruesome murder of the President General [PG] of Obosi, Engr. Ikechukwu Obosi on the early evening of January 2nd along Obosi road at Afor-Adike in Uruowulu village of Obosi appears to have been the result of his efforts to eradicate the menace of cultism and associated insecurities from the immediate environs of Obosi community. Information available to 247ureports.com indicates that Engr. Okolo was assassinated by a gang of cultists led by Kelechi Ewesiobi [aka Gattuso & Prime Minister Gaza gang] with his partner Chukwuwendu Chukwura [aka Commodore] and other yet to be mentioned. The group of cultists belong to a gang that refer to themselves as Gaza gang.

See video of the leader of the gang below:

Information obtained from a consortium of competent sources point to highly placed stakeholders as having a ‘hand’ indirectly and directly in the assassination of the PG through their actions and inaction.

The event that gradually led to the assassination began at the meeting held at the home of Iyasele Obosi [Traditional Prime Minister] where the PG and others stakeholders in Obosi were in attendance. At the meeting, the PG harped on the need to implement previously discussed issues regarding safeguarding the community from the menace of gangs and cultists. Issues that comprised of installation of CCTV cameras and other technological based security measures which were agreed upon to be installed at strategic locations within the villages of Obosi. But the PG’s insistence on installing the security gadgets resulted in a backlash from the stakeholders seated at the meeting. According to the information obtained from 247ureports.com from a highly competent source, the PG’s “statement was seriously attacked as many evil minded men were not in support of him at the meeting”. Instead, the stakeholders told the PG to begin the installations at his own village before extending to the other villages of Obosi town.  Through this , the meeting was postponed for the following day.

The following day as the PG approached the meeting venue, he was assassinated. 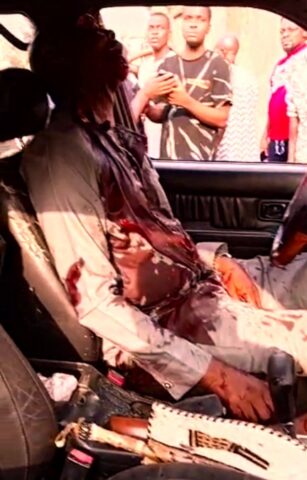 Investigators believe the statement made by the PG the previous day had direct link with his assassination. The PG’s statement was leaked to the gang of cultists by the stakeholders – and it led to the gruesome killing of the PG the following day. The rescheduled meeting did not hold as scheduled.

The body of the PG was immediately deposited at Saint Edwards hospital, Obosi.

However, more information regarding the assassination have begun to leak into the public arena as investigators pry into the details of what transpired. On the first level, the many ‘boys’ who are reported to be populating the cadre of the cultist gang are said to be ‘boys’ loyal to the many stakeholders in the community including the Igwe of Obosi, Chidubem Iweka 111.

Many of the ‘boys’ presently marauding as killer cultists in the community were previously ‘decent’ members of the Obosi community who had aided the present Igwe Obosi in his battle against the menace of drug dealers and peddlers led by the then ‘Governor’, former Igwe Nwakobi and others. Chidubem Iweka who won the battle of the eradication of the bad menace long before becoming the Igwe of the community – immediately became a hero in the larger Obosi community. Many of the ‘boys’ who aided him in the battle remained with him – till his ascension to the throne of Igwe.

Community members have called for the disbandment of all the security outfits in Obosi especially MACOB and Scorpion.

The previous administration in Anambra State led by Governor Willie Obiano had set up a panel of inquiry on the Obosi imbroglio – of which a white paper was never released. Concerned stakeholders of the Obosi community have appealed for the release of the white paper.  They believe based on evidence that the white paper indicts the Igwe – and for this reason has developed cold feet in fully tackling security issues in the community.

Investigators who have been prying aggressively to unravel the killers of Obosi PG have pointed to Gattuso and his gang as being connected to the killings in Awka of 1st January, 2023. They have discovered that some prominent men in Obosi including the Igwe are using these boys.