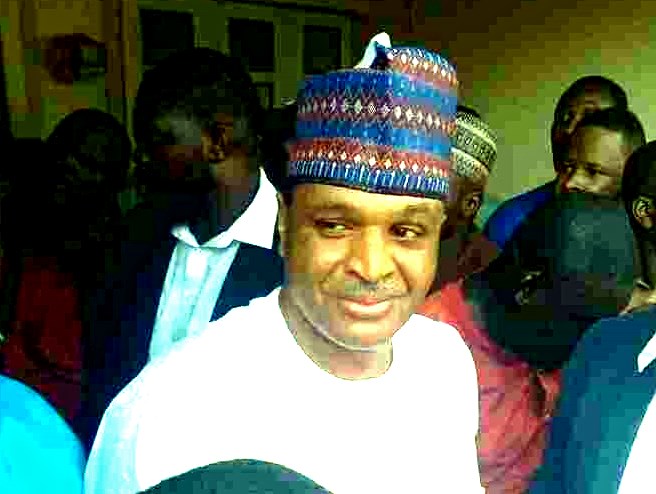 The APC gubernatorial candidate of Bauchi State, Air Marshal Sadiq Abubakar [RTD] who held his campaign flag off yesterday at the famous Sir Abubakar Tafawa Balewa Stadium in the capital city of Bauchi State – witnessed what may have appeared a bold-faced rejection by his supporters and the national APC.

On the first level, the APC leadership in the State and nationally opted to boycott the event. Aside from the national chairman of the party, Senator Abdullahi Adamu who attended the flag off event reluctantly, none of the leadership and/or major stakeholders of the party graced the event. Available information indicates that the APC national chairman, Abdullahi Adamu had decided on not attending the said flag off. It took last minute pleas from friends to change his decision. Adamu was said to have changed his decision not to attend on the day of the event. He decided to grace the occasion on the morning of the event. While at the event, his demeanor gave his mood away. He was uncomfortable and visibly unhappy to be at the event in the company of the APC flag bearer.

Adding muster to an already soiled situation, all of the “Buhari old time political associates” also turned away from the flag off event. On the first bat, the leader of the APC in the State, the federal minister of education, Malam Adamu Adamu did not attend. The Nigerian Ambassador to Germany, Yusuf Maitama Tuggar who has contested twice for governorship in Bauchi – did not attend. Hon. Ibrahim Zailani – a onetime CPC gubernatorial aspirant [2011] and APC aspirant [2015] – he did not attend. Nuhu Gidado – the deputy governor to the former governor of Bauchi State [Mohammed Abubakar] – he did not attend.

The neighboring States to Bauchi State which are governed by APC governments – Gombe, Yobe, Jigawa, Kano, Plateau and Borno also opted to abstain. The various administrations which in the past had enjoyed friendly relationship with the APC government in Bauchi State opted not to send representatives to the said flag off event.

One of the key supporters of the APC gubernatorial candidate told 247ureports.com in confidence that the outing was “clear embarrassment”. He explained that “there was no denying the fact”. He added that while the activities were unfolding at the flag off grounds, it became obvious Sadiq Abubakar has lost the narrative in Bauchi State. “The crowd was not with us. They were hailing and screaming the name of the PDP governorship candidate instead of our principal’s name. it was so shameful”. The source explained that they had to plead with the journalist and camera at the flag off ground not to photograph the areas that were not occupied in order not to expose the fact that the event was scantly attended.

“We had to mobilize crowds from nearby states, from Gombe and Jigawa State to fill the empty seats.”

The striking fallout from the campaign flag off is that some of the close associates of the Sadiq Abubakar campaign think tank have begun to develop cold feet toward the gubernatorial project. Our source reveals that many of Sadiq’s close associate view him as “extremely arrogant” and “difficult to work with”. For this reason, some of them have begun to “look around”.  The source cited an incident that occurred during the buildup to the flag off campaign as indicative of the arrogant nature of their principal.

The source said when they were in search for a fitting venue for the flag off. They decided on the Sir Abubakar Tafawa Balewa Memorial Stadium. But instead of applying directly through the owners of the stadium – the Bauchi State government – Sadiq opted to write directly to the federal minister of sports – seeking permission to use the stadium for his flag off. But unbeknownst to him, the Stadium was duly handed over to the government of Bauchi State during the Isa Yuguda administration. So, as the federal minister of sports granted Sadiq the request, Sadiq moved into the Stadium forcefully to begin preparations for the flag off. When it was brought to his attention that the Stadium actually belonged to the State Government of Bauchi – and that he did to apply directly to the State government through the State ministry of Sports. He rebuffed the idea of applying through the State Government. He then retorted “Who is that bastard that could stop us here” – referring to the State Government and/or Governor.

It took the timely intervention of the Bauchi State Governor, Bala Mohammed – when it was brought to his attention – to impress on the State ministry of sports through the Commissioner to “not make a big deal out of it”.

247ureports.com made efforts to reach out the State APC chairman of Bauchi, Aliyu Babayo. But he did not respond.

Umar Duguri contributed to the story