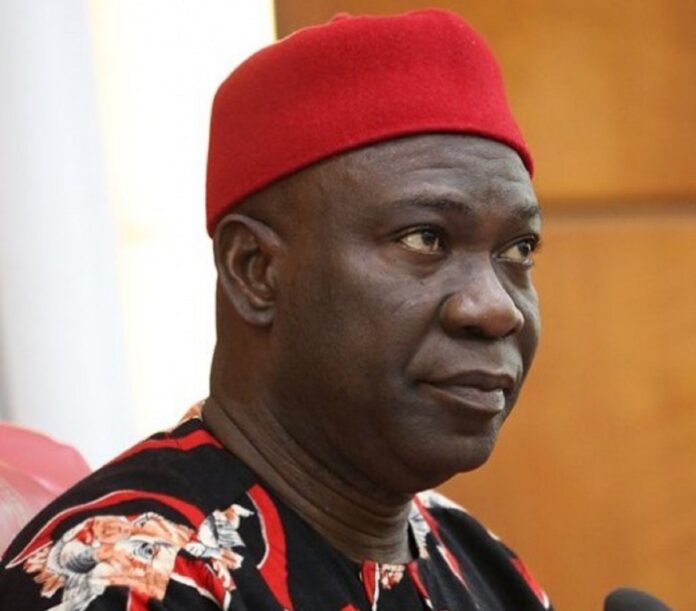 Former Deputy President of the Senate, Senator Ike Ekweremadu, has identified direct primary election as the only viable option in the nomination of candidates in order to consolidate Nigeria’s democracy.

He also rued the negative influence of narrow and partisan interests in the making of 2022 Electoral Act, as the long-delayed creation of state police could no longer guarantee internal security.

This was even as he called on the nation’s leaders to seek urgent help of the international community to flush out terrorist cartels or risk Nigeria becoming another Somalia.

“When we mounted the leadership of the 6th National Assembly in 2007, and in subsequent Assemblies, we took it upon ourselves to reform the electoral system, including strengthening the critical institutions in the electoral process, namely the Independent National Electoral Commission (INEC) and the political parties.

“Whereas the INEC has really stabilised and improved greatly, the political parties have not made the expected progress.

“Some of our efforts include financial autonomy for the INEC; administrative autonomy for the INEC; removal of membership of a political party as a qualification for appointment into the INEC; early release of funds to INEC; early primaries to allow time for resolving any issues, while also allowing the INEC 360 days to prepare for elections; barring of the INEC from rejecting/disqualifying candidates; removal of the INEC officials as respondents in election petitions; removal of restriction on electronic voting; legal backing for smart card readers and any other voter accreditation technology that the INEC may deploy; and electronic transfer of results; and ending of disqualification of candidates by administrative panels.

“Others are compulsory conduct of party primaries to address the issue of impositions; substitution of candidates only in the event of death or written withdrawal by a candidate; early commencement of election campaigns; empowerment of political parties to conduct primary election to replace a candidate who died in the course of an election; timeframe for determination of pre-election matters; timeframe for determination of election petitions; stoppage of government subventions for political parties; window for direct primaries; reduction of age qualification for political offices; stipulation of the conditions and process for deregistration of political parties, among other vital reforms”, he stated.

Ekweremadu, however, said that whereas several milestones were achieved in the Electoral Act 2022, the Act could have been better were the processes not hijacked by narrow and political interests.

He said: “A thorough scrutiny of the Act would show that unlike the Electoral Act 2010, Electoral Act 2022 lacks sequence and coordination, as lot of things were jumbled up.

“Furthermore, it took the intervention of some of us for critical provisions to make it into the Electoral Act. For instance, I personally drafted the provision for the Electronic Transmission of Results for inclusion in the Bill because for whatever reason, it was not there originally.

“It took enormous push by some progressives among the Committee members to push such provisions through.

“Even after we had signed off on the report, there were still attempts to water it down to suit narrow and party interests. Thank God, some of us as well as the media and CSOs were alert.

“It was also the hijack of the process to tailor the law to serve narrow group and partisan interests that resulted in the grave error of the exclusion of statutory delegates, including lawmakers themselves, from participation in party primaries”.

Ekweremadu explained that the whole essence of direct primary was to ensure that all bona fide members of each political party partake in the primary elections and make hijack of the process by a few persons difficult, adding that the result of the veto of that provision by the President and insistence on the restoration of delegate mode and inclusion of consensus mode of nomination was “the recent political fraud perpetrated across the nation and across various political parties in the name of party primaries”.

“Today, not only does money play greater roles in the emergence of candidates, turning delegates to overnight millionaires, because the delegates are fewer, the non-participation of statutory delegates was fate playing into the hands of the governors, who colluded with greedy party leaders to manipulate the emergence of ad-hoc delegates and weaponise them fully for their selfish political interests.

“At the end of the day, democracy and the people, are at the receiving end, as the masses can only elect candidates thrown up by the various political parties.

“My advise, therefore, is that we need to restrict political parties to direct primaries as the only mode of nominating candidates if we truly want to preserve and grow our democracy, and recruit leaders that will truly serve the collective interest” he added.

Ekweremadu, further advocated that only political parties, which made their electronic and biometric membership registers available to INEC at least one year to the commencement of the primary elections, should be allowed to nominate candidates for the general election.

He, however, called for bold steps to “recalibrate our security system because we must first have a secure country before we can have a meaningful democracy”.

“Currently, Nigeria is gliding down the slope and we all have ourselves to blame for refusing to do the right thing over the years.

“Before now, some of us had shouted on top of our voices on the need to decentralise the police system, but to no avail. I sponsored a Bill for the Creation of State Police in the 8th and the current National Assembly, but nobody seemed to pay attention.

“I regret to inform you that by my own estimation and taking lessons from other climes, our condition has become so bad that even state police can no longer save us now.

“Terrorists, bandits, and all manner of criminal cartels have taken the nation by the jugular, and we must now urgently seek the help of the international community, lock the country down, and deal with our security situation. Otherwise, once a few of the terrorist cartels are able to take full control of a few states for their respective selves, our fate would be like that of Somalia. God forbid”, he concluded.