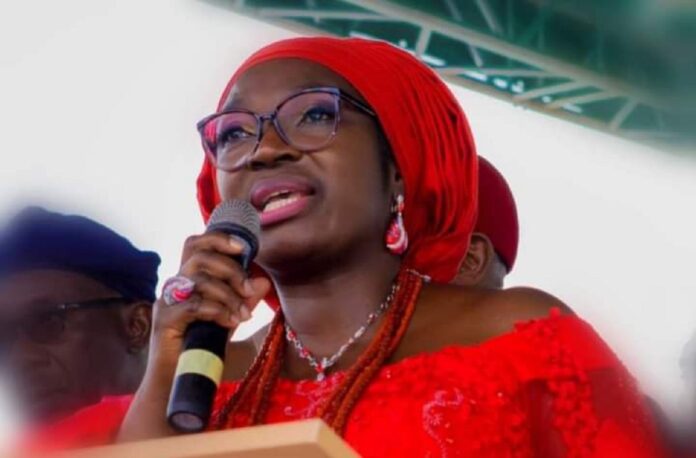 Senator Uche Lilian Ekwunife is the current Senator representing the good people of Anambra Central Senatorial Zone in the Red Chamber —a seat she has occupied since 2019, and still counting.

A two-time former House of Representatives Member who represented the Anaocha/Njikoka/Dunukofia Federal Constituency between 2007 and 2015; Ekwunife won the Anambra Central Senatorial Seat in 2015 after switching one political party to the other —from the All Progressives Grand Alliance (APGA) to the People’s Democratic Party (PDP). This led to challenging of her victory in the court, and consequent declaration of her seat vacant in December 6, 2015, by an Appeal Court sitting in Enugu; after which Victor Umeh of APGA then was elected as Senator in a bye-election that held later in 2016.

In 2019 general election, Ekwunife defeated Senator Umeh to reclaim the Senatorial Seat under the platform of the People’s Democratic Party after returning to the part from APC which she joined ahead of the 2016 re-run election in the zone.

Since 2019 till date, Ekwunife has been the Senator representing the zone, still under PDP.

Speculations, however, have continued to emerge that Ekwunife’s victory in 2019 was a result of the Obi-Atiku machination. Many argued and still argue that she was ‘inadvertently voted into power again’, as a result of the massive support and votes the people of the area and Anambra State at large gave to PDP then, particularly because of the then Party’s Vice Presidential candidate and former Governor of the State, Mr. Peter Obi, who happens to come from the same senatorial zone (Anambra Central) with her.

It was argued that many voters from the area, especially the aged ones among them, were seriously bent to voting for Atiku-Obi under the PDP then, both during the senatorial election, without actually knowing that they were actually voting for Ekwunife.

Notwithstanding how witty or fallacious these arguments may appear, the truth still remains that Ekwunife won the 2019 senatorial election, and has remained the Senator representing the zone till date.

However, the most intriguing thing now is that another general election is around the corner, and the table is set again, with the battle line apparently drawn again like never before.

Another interesting aspect of it is that many changes have taken place like never before in the political environment of the Anambra Central Senatorial Zone, ahead of the 2023 general election.

Come 2023, Ekwunife will uneasily contest here senatorial seat with former Senator (now of the Labour Party, LP), and Hon. Ferdinand Dozie Nwankwo (of the All Progressives Grand Alliance, APGA), who is a two-time and current Member representing the Anaocha/Njikoka/Dunukofia Federal Constituency, a seat Ekwunife left to become a Senator in 2015. Aside Senator Umeh and Hon. Nwankwo, there is also Chief Okelekwe Boniface of the All Progressives Congress (APC), who is a business tycoon; as well as some other candidates from other political parties in the zone, warming up to drag the seat with Ekwunife.

Again, Mr. Peter Obi, whom many claim his personality and fame gave Ekwunife victory under PDP in the last (2019) general election, has left the party to seek his presidential fortunate in another party —the Labour Party — which coincidentally is also Umeh’s platform for the 2023 senatorial race.

Everyone is now on their own.

Now, back to Ekwunife’s chances, Senator Ekwunife is the sitting Senator representing the zone in the 9th Nigerian Senate; and no matter how one sees it, the incumbents usually have some advantages over other contestants during election into almost every political position in Nigeria, as their performances, works and achievements would always be there to speak for them, and convince the people on their behalf. That is for people who have achievements or convincing achievements anyway.

Again, Ekwunife is the only female among her co-contestants in the zone and one of the 9 senators (out of the total 109 senators) currently in the 9th Senate. Bearing this mind, many electorates, especially the women folks among them (who are usually the majority) would obviously not want her to lose the seat, and would, therefore, fight tooth and nail to ensure she retains the position, as their woman. The “Ka Nwaanyị Jekene” mantra and the mentality or advocacy of “Say No Female Marginalisation in Politics” would always play out and definitely have some impingements or influences on Ekwunife’s chance, on the positive side.

Moreover, Senator Ekwunife has taken her time to build network of followers and loyalists over the years. Her stalwartness in the Anambra PDP; her position as the PDP Guber Campaign DG in the last November governorship election in the State; her recent nomination by the south-east PDP as the Senate Minority Leader (to replace former holder of the position, Senator Eyinnaya Abaribe, who recently defected to APGA), and some other ways people have shown trust in her capabilities and political weight are also advantage.

On the other hand, many people love Senator Umeh for his Pan-Igbo advocacy and outspokenness, especially on issues affecting Ndi Igbo and National Development at large, as was observed during his few years in the Senate, and other places his voice has been heard. Hence, many would want him back at the Senate, to help voice out the plights of Ndị Igbo and speak up against the perceived marginalisation meted out to them in Nigeria, which many Senators of Igbo extraction are either too shy, too afraid, too chauvinistic, or too aloof to speak up about.

Also, Umeh has proved to be more media-friendly than Ekwunife; and the media is one of the key elements and actors one must not ignore, to win election. Umeh’s media friendliness alone would also give him some edge over Ekwunife.

Moreover, being in the same party with Peter Obi, Umeh may leverage and peddle on the current national wind of the Peter Obi Movement to fly above other co-ontestants, come 2023, as Ekwunife speculatively did in 2019.

Furthermore, Hon. Ferdinand Dozie Nwankwo would be another headache to Ekwunife, as he is contesting under the platform of the rulling party in the state, APGA.

Besides, as Member of the House of Representatives, he also has some achievements to lay claim on to seek higher position of Senator in the zone. This, arguably, may be the reason he defeated Umeh to win the APGA senatorial ticket for the zone. And if that is true, he therefore, would obviously constitute a stumbling block to Ekwunife, come 2023.

Hon. Nwankwo is also one of the youngest among his co-contestants; and people of the zone may also want to try a youth and fresher ideas this time.

On the part of APC’s Chief Boniface Okelekwe, although he may appear to be a new person in the system, his unopposed emergence as the the senatorial candidate in such a rulling national party, APC, shows that he also has a capacity and some political weights, and therefore, should not be underrated.

As a successful businessman, he is also one of the senatorial candidates from the zone (if not the only candidate) who has prioritized the welfare of traders in his manifesto and campaign promises from the day-one, which is an angle many other representatives and co-contestants from the zone have given less attention to, forgetting so quick that Anambra people are business-minded. And because traders constitute majority of the voting population in the state and in the zone too, this would definitely accord him some advantages over his Ekwunife, if she fails to prioritize the welfare of traders in her manifesto and campaign promises.

Finally, on a general note, massive defections that loomed and still loom in PDP (both in Anambra and other parts of the country), including that of Obi and his loyalists, may also constitute a shrinkage to Ekwunife’s and PDP’s chances in the state, come 2023.

Although there are also defections and counter-defections to and from other political parties in the country, due to perceived injustice or ill-treatment before, during and after the primaries; few of such defections (on the positive side) is yet to be seen in Anambra PDP, particular in the Anambra Central, since the exit of Obi to the Labour Party.
The huge vacuum left by him and his loyalists are obviously yet to be filled.

Having all these in mind, therefore, one can safely argue that Senator Uche Ekwunife’s chance of returning to the Senate come 2023 is predictably hazy and borderline.

The stage is already set for the race.

But until then, we keep our fingers crossed.