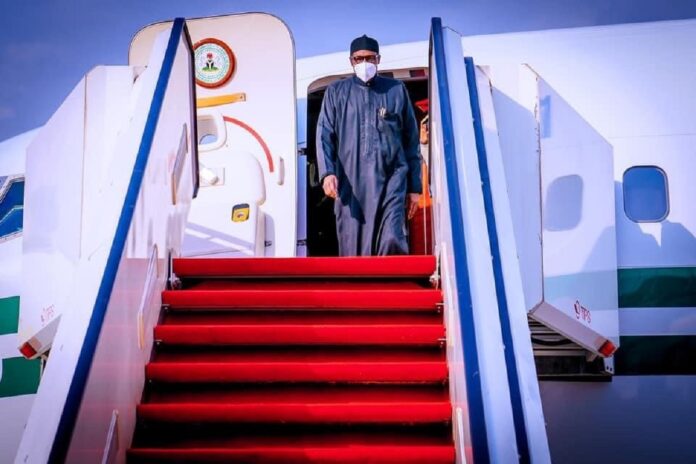 President Muhammadu Buhari has returned to Abuja after a two-day visit to the capital of the United Arab Emirates (UAE), Abu Dhabi.

The president also joined the Juma’ah prayers, at which prayers were offered for the repose of the soul of the deceased on Friday.

During a short interaction with Sheikh Zayed Al Nahyan, Buhari expressed his condolences and that of Nigeria on the demise of the late Sheikh Khalifah and congratulated the new president on his election.

Buhari expressed optimism that under Sheikh Mohamed the two countries would continue to actively champion a vision of sustainable security, strengthen counterterrorism cooperation, facilitate trade and investment, and promote prosperity and development.

NAN reports that the Nigerian leader returned to Abuja amidst confusion on whether or not he had signed the Electoral Act Amendment Bill forwarded to him by the National Assembly few days ago.

The amendment is crucial to the participation of statutory delegates at the primaries and national convention of political parties.

They have been excluded from voting and being voted for during the exercises in the previous amendment signed into law by the President.

When asked to confirm whether or not Buhari had indeed assented to the latest amendment, the Special Assistant to the President on National Assembly (Senate), Sen. Jide Omoworare, simply said the president ”should have signed” the amended fresh electoral act into law.

“I can confirm to you that Mr President signed the bill into law this afternoon and we are all happy about it as it will give us and other statutory delegates the power to vote at the primaries,” Chinedu said.

However, NAN reliably gathered that the president had not signed the latest Electoral Act Amendment as being speculated in some quarters.

Earlier in the course of the week, the president had on May 17 congratulated newly-elected Somali President, Hassan Mahmud, “for successfully staging a comeback after being unseated in 2017’’.

The president commended the out-going president, Mohamed Abdullahi Farmaajo, for his swift acceptance of Mahmud’s victory which inevitably would lead to a peaceful transition in the best interest of the people.

He reassured the new Somali leader that “Nigeria will continue its usual support for peace-keeping efforts in Somalia’’.

Buhari stressed that “African countries must unite against terrorists and other evil forces seeking to disrupt and destroy our territories’’.

Speaking at the event, Buhari assured that more investments would be deployed to the provision of infrastructure and facilities for safe, secure, environmentally friendly and sustainable civil aviation in the country.

According to him, Nigeria will support the ideals and aspirations of ICAO and achievement of its strategic objectives, in collaboration with other Member States of the organisation.

The president also presided over the virtual meeting of the Federal Executive Council (FEC) on Wednesday where members of the cabinet observed a minute silence in honour of former Minister of Communications under retired Gen. Ibrahim Babangida regime, Olawole Ige, who died at 83.

NAN recalls that the family of Ige announced his death on May 9.
The council approved N169.7 billion for the reconstruction of four roads under the tax credit scheme.

Buhari on May 18, condoled with families of victims of the Sabon Gari, Kano, gas explosion in which nine casualties were reported.

He directed relevant officials to provide adequate treatment for the injured persons.

The Presidency on Thursday stressed the significance of President Buhari’s visit to Abu Dhabi, the capital of the United Arab Emirates (UAE).

According to the president’s media aide, Malam Garba Shehu, Nigeria has very strong economic and defense ties with the UAE.

The countries, which are trying to strengthen their post-COVID recovery, are banking on strategic partnerships to further commercial ties.

“UAE, which is today a recognised financial and manufacturing hub and has shown, to our admiration, a remarkable willingness for energising our industry to industry cooperation, which will help strengthen the post-COVID economic recovery in both countries,” he stated.

“Flowing from this, they have helped us to curb illicit financial flows to the Boko Haram terrorist organisation. Also ongoing are military procurements and supply to the Nigerian Armed Forces of seriously needed hardware.

” A few weeks ago, a brand new warship for the Nigerian Navy was commissioned in Dubai and has set sail to Nigeria.

”The Nigerian Army just procured 100 Mine Resistant Armoured Personal Carriers (MRAPS) from the UAE,” Shehu said in a special feature on the president’s trip to Abu Dhabi on Thursday.